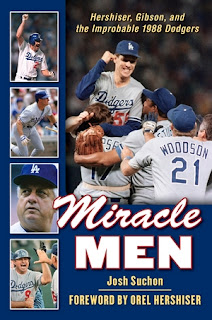 For three straight nights I have dedicated a significant amount of time reading Josh Suchon’s book on the 1988 Dodgers, Miracle Men.   This is another book that is a must for every Dodger fan’s Baseball Library.   Put it next to Jane Leavy's Lefty's Legacy and Roger Kahn's Boys of Summer on your bookshelf.   It is "must read" Dodger Heaven for the truest of blue fans.

You’ll find facts about that amazing season that you already knew, but are well worth re-visiting and then there are the tidbits of information that weren’t known to the world.  Josh did his research, and a lot of it.   That team was truly a miraculous cohesive group that meshed into a unit that refused to be beaten.  I'll mention a few facts from that season that some might not remember or recognize.

John Shelby
I had forgotten how many key hits, amazing defensive plays and clutch homers he hit.  His quiet demeanor made him the forgotten man of that championship team.  What an amazing player he was on that team.  Prior to Claire's days as a G.M., he overheard Sweet Lou Johnson state that Shelby was a great player that simply needed a change of scenery.  He kept that mental note in his head and traded for him when the opportunity surfaced.  It was an astute move that paid dividends a year later.

David Cone
Thanks for the brief journalism career David.  It cost the Mets a game.  This Dodger team was as emotional a group of players that I ever remember in baseball.  They almost had a football mentality, using any slight to their reputations as incentive to win.  That usually doesn’t work in baseball, but these guys were able to do it.  Whether it was Bob Costas, David Cone or Don Baylor.  Anyone that disrespected them would motivate them to succeed.
Steve Sax
1988 was the year, in my opinion, that he really matured as a player.  Yes, he had been an all star, rookie of the year and was within an eye lash of winning the batting title one year, but in ’88 he simply was a vital piece of that championship team.  Sparking rallies, stealing bases, providing inspirational play and great defense.  When Claire let him depart after that season, the Dodgers lost such a key component to their success.  I wish he was in the Dodger organization today.

Mitch Poole
The Dodgers batboy and equipment employee at the time.  The story of Poole is quite interesting from his perspective as a young 25-year old batboy that spent the entire first game of the World Series attending to and preparing Kirk Gibson for that one at bat.  It is perfectly understandable why Gibson asked him to throw out the first pitch last year in the Kirk Gibson Bobblehead Day on his behalf.

Dave Wallace
The future Dodger pitching coach and temporary General Manager years later.  Wallace had been a minor league pitching coach of Orel Hershiser and when in Los Angeles to watch Ramon Martinez’s first start, he detected a flaw in Orel’s delivery and helped him correct it while he was in-between starts.  What followed shortly thereafter was Hershiser’s 59 inning scoreless innings streak.

Kirk Gibson
What a gritty player.  The dude must have chomped on nails for breakfast every morning.  We all know that he was the ultimate team player, but after reading Suchon’s portrayal of him, you realize that he pretty much sacrificed his career in order for the Dodgers to win that championship.  Team achievement is all that matters to him and I wish he was on our side today.

Jesse Orosco
Man, I forgot how much he struggled that year.  Did he ever get anyone out?  Lasorda wanted to kill him for his constant failures and wildness  His biggest contribution was probably the eye black incident with Gibby in Spring Training.

Game One of the NLCS
I can’t believe the Dodgers let that one get away.  Suchon’s inning by inning accounting allows the reader to re-live it.  That was a game that never should have been lost.

Fred Claire
A rookie G.M. the year before that was truly on the hot seat.  It was interesting to read how very few baseball executives respected him early on. He came through with flying colors.  I knew Claire had passion, but how much he was involved in the day to day operations is well chronicled.  There’s an interesting story involving Claire and the whereabouts of the game ball of the final out of the ’88 World Series too.  Also, who would have guessed that being a jogging partner with Sandy Alderson would result in so many vital trades with the Oakland A’s?

Keith Hernandez
What a tough defensive series he had in the NLCS.  We all know he was the best defensive first baseman of the 80s, but in the ’88 NLCS he made two crucial defensive gaffes that cost the Mets dearly.

Mike Krukow
I tell you, this guys hates the Dodgers so much.  Always the complainer.  Still whining about the interference double play on his Giant teammate Brett Butler that preserved Hershiser's consecutive innings streak.  Krukow is the consummate Dodger basher who can’t give credit where credit is due.

Giants fans and Candlestick Park
The Dodgers doubleheader at Candlestick on July 26th is relived.  Easily the worst fans ever in the history of the game.  Thuggery, dangerous, profane, violent.  It was an atmosphere where fans were pelting Gibson with anything they could throw and attempting to tear down the outfield walls to get to players.  Even Giants President Al Rosen called the situation "frightening."  I can't believe I completely forgot about this doubleheader sweep that the Dodgers pulled off in San Francisco under those extreme conditions.

Jay Howell
The drama of the NLCS suspension is well chronicled.  His 7-out save in game four of the World Series was pure clutch.  We seem to have forgotten all he went through and how he prevailed to get that two plus inning save.  An amazing performance.

Injuries in the World Series
How easy it is to forget that the Dodgers were the walking wounded in that series and it is amazing that they won the thing.   They didn’t have the services of Tudor, Scoiscia, Gibson, and to some extent Marshall at the end.  They were down to 19 players at the end and had even called Gilberto Reyes back from the Dominican Republic to be their emergency catcher.  He arrived at the ballpark in the second inning of Game 5, the final game of the series.  Not a bad way to earn a World Series ring.

John Tudor
We all were very happy with the trade Claire made to bring him over in late August but in reality, he didn’t contribute much at all to the team.  He was damaged goods throughout post season play.

The pitching staff
For much of the year, the Dodgers operated with a four man rotation.  Hershiser, Belcher, Leary, Valenzuela (until he was shut down) and and assortment of others (Sutton, Hillegas, Ramon Martinez, Krueger).  It’s no wonder that Reds manager Pete Rose never admitted that the Dodgers were a legitmate threat until the very last weeks of the season.

Tom Lasorda
Most definitely his greatest year as a manager was in ’88.

Re-live it all.  Miracle Men is a book that will walk you through the entire season, 25 years later as if it happened yesterday.
Posted by Evan Bladh at 9:40:00 PM