It Isn't All Bad, Great Performance by Beckett Today

Though the Dodgers came up on the wrong end of the scoreboard today, the teamy came out as victors in one sense of the word.  Josh Beckett gave the much needed Dodger bullpen a full twenty-four hours of rest.

It would be simple to dwell on the negatives with concerns about the lack of Dodger offense and the absence of hitting from some substantial expected contributors, but Beckett’s amazing Complete Game loss may have saved the team for the upcoming San Diego series.  His performance served its purpose and gave the entire bullpen staff another day to recharge their batteries. The season is only twelve games old and as long as they stay in the race up to the stretch run, I say they're in good shape.

Beckett’s stuff looked as electric as it did in the old days.  He wasn’t motoring it up there at 97 MPH as he used to, but a consistent fastball of 93 will work fine for him.  Beckett’s repertoire of changeups, curves, fastballs, and cutters are definitely keeping opponents off-balance.  It’s fair to say that his improved contributions will be valuable to the ball club with the loss of Zack Greinke for a substantial part of the season.

My guest post at thinkbluela.com from yesterday addressed the timetable that I anticipate for Greinke’s return.  There is some disagreement with my predictions, but I have a hard time imagining Greinke coming back much sooner than the All Star break.  First, because of the severity of the clavicle break, which required surgeons to reset it with a metal plate and not a steel rod and second, because bones take time to heal.  Additionally, he’ll have to rehab in order to stretch out his innings again.

Is it crazy talk to opine that the Dodgers should call up Yasiel Puig for the series at Baltimore later this week?  If such a move didn’t start his Free Agency clock early, I’d say go for it.  A quick three game call up for three in Camden Yards would be mighty interesting to watch.

By the way, Puig is leading the Lookouts in hitting in this short season thus far. 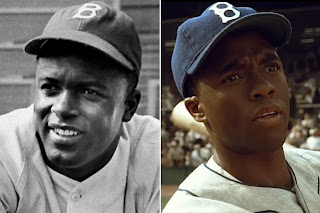 I watched the motion picture “24” in the morning matinee in a half empty Say Area theatre.  At the conclusion, there was applause from the attendees.  A few moist eyes were seen as well.  It was a movie that was moving to me.  My wife, who tolerates baseball due to my fanaticism of it was completely moved.  I absolutely loved it and aside from the great performances of Chadwick Boseman and Harrison Ford, I found the re-creations of Ebbets Field, the Polo Grounds, Forbes Field were amazing.  Oscar material?  Well, my biased opinion thinks so, but I know about these things about as much as my grandma knows the infield fly rule.