11 Years Ago Today, Odalis Perez and near Perfection

I know the Dodgers are currently battling a hot Brewers team at home, but earlier today I received an instant message reminder.  It notified me that today was a significant day in Dodger history.  This was a game that I won't forget - newly acquired Odalis Perez almost tossed a perfect game.

There was a time that the Dodgers acquisition of Odalis Perez as part of the Gary Sheffield trade looked almost like a steal of a deal.  Opening the 2002 season 3-1 with a 1.64 ERA, he had the look of a Cy Young Award candidate.  Even more impressive was his attitude.  He loved being a Dodger, mainly because he was given a chance to be a legitimate Major League starter, something that the loaded Atlanta pitching staff didn’t afford him the opportunity to do.
So it was, 11 years ago today, April 26, 2002, Odalis Perez was almost perfect.  So near perfect that the game he pitched on that date  left an indelible mark on my memory.  It was the perfect game that should have been, but wasn’t to be.  All because of a silly bounce, a small pebble, a dinky divot.  Whatever it was, it caused a day for the ages to become a ho-hum one hitter that few remember on this day.

This was a frigid April late afternoon game at Wrigley Field in Chicago.  Perez got the start agains Kerry Wood and a Chicago Cub team managed by veteran skipper Don Baylor.  The Cubs had a respectable hitting lineup of players such as Sammy Sosa, Mark Belhorn, Fred McGriff and Moises Alou.  On that particualr day, Perez was dealing for a Dodger team that eventually would win 92 games on the season.

“He threw strikes, he changed speeds and he kept the ball away,’ said Don Baylor.  “It was nothing he overpowered anybody with…a lot of easy outs.”  Pinpoint accuracy is how his catcher Paul LoDuca described his performance.  “He was throwing his fastball where he wanted to for strikes.  It had good movement, good sink…he was dominating.”

Perez, 23 years old at the time, looked to be a promising Dodger fixture for years to come.  Another gem discovered by then G.M. Dan Evans.   None of us were happy about the fact that Sheffield had forced the Dodgers to trade him and that teams didn’t offer much in return for the unhappy superstar outfielder.  Perez looked to be a gem of a find for Evans, though his luster would fade within a few years.  On this day though, Odalis would shine as he never ever did again in his Major League career.

Coming off a complete game in Colorado in his previous outing,  Perez was completely confident.  His pitching coach, Jim Colburn wasn’t so sure though as he watched his pre-game warm-up in the bullpen.  “He didn’t warm-up all that well and I was a little worried,” he said.

That worry soon disappeared as the Dodger offense heated up on the chilly day for 10 runs, (three in the fifth and six more in the sixth).  All that remained to be seen was if Perez could continue pitching a perfect game as he kept retiring the side in order, inning after inning.

Perez was getting easy outs.  He struck out four of his first six hitters he faced, including the side in the second inning.  No balls even threatened to fall for hits.  This was a Dodger team that was excellent defensively.  Izturis at short,  Grudzielanek at second, and Beltre at third base.  LoDuca behind the plate.  Green,  Roberts and Jordan in the outfield.   It was a slick fielding group that was amongst the top defensive teams in the game.

By the top of the 7th inning, Perez had retired the first 18 hitters.  Up to the plate stepped a promising speedy outfielder, Chicago’s leadoff man, Corey Patterson.   Patterson was a top notch prospect at the time.  Many touted that he’d be the next Vince Coleman.    The third overall all pick in the 1998 draft (behind Pat Burrell and Mark Mulder),  2002 was to be the year that Patterson was to rise to stardom as a Cub.   The centerfield job was his for the taking and he was hitting well over .300 when this game began.

On an 0-1 pitch, Patterson tapped a ground ball up the middle just past Perez’s outstretched glove.  “No sweat” I thought to myself, Sr. Gold Glove Cesar Izturis is playing shortstop behind him.  ``When I saw it bounce past Odalis, I said, 'Oh, I got it,' '' Izturis said. ``Then it bounced on my chest. It's (ticking) me off because it's a routine play, but it kind of kicked to my shoulder. It was a tough play.''

Izturis recovered, whirled and fired to first base.  It was a bang-bang play at the bag, but first base umpire Randy Marsh ruled in Patterson's faveor, signaling him safe.  No one argued.  Patterson at the time was regularly clocked at 3.99 from home to first base.  Anybody else on the Chicago team would have been out.

This might have been the best pitched game I ever watched, and I’ve seen a lot of them.  Not because of Perez’s overpowering stuff.  It was simply that nothing even approached base hit status.  There were no exceptional defensive plays that robbed the opposition of hits.  Just a lot of rolling grounders to infielders and occasional pop ups.

The cold weather helped, but it wasn’t as if everyone offense was non-existent this game.  The Dodgers tattooed Kerry Wood and Carlos Zambrano for 9 runs and 9 hits over six innings of play to put the game away. 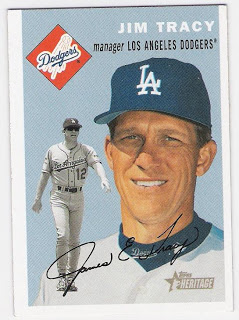 All the remained was the question of the perfect game.  ”In my opinion, it took a guy with the speed of Corey Patterson to get to first base,'' Dodgers manager Jim Tracy said. ”Izturis would have thrown anybody else out and it would have been a perfect game. It's tough, but I'm sure a one-hit shutout will not disappoint (Perez), but as well as he pitched, you would have really liked to have seen the hit be a hard line drive or a hard ground ball up the middle.''

So that was it.  Perez's chance for the ages missed by an eyelash.  or was it a pebble.  Maybe a divot in the dirt.  Whatever it was, it was an amazingly pitched game.