Just When You Thought Things Couldn't Get Worse, It's Hello Kitty Night Tomorrow

As the Dodgers struggle and continue to fail to perform in clutch hitting situations I'm hoping that this is an anomaly and not a trend.  It makes me wonder though.  Last season's September collapse of the offense could be partially blamed on Kemp's injury and the last minute acquisitions that created an August 25th assemblage of players that had about 30 games to put things together and take the division.  We saw a ball club that slumped deeply on the offensive side before playing well at the end, which turned out to be too little too late.
Now as that assembled team has had a full Spring Training, (and extended one at that), on paper things looked positive for them heading into 2013.  Unfortunately, the same tune from early to mid September last year is being played again in April.   It is a total lack of clutch hitting and the frustration is setting in.   This lackluster Dodger start makes me wonder if this is what the makeup of this team is.

Now sitting at .500 after 14 games, you'd think that this isn't the time to panic, but maybe it is.  The recent play combined with injuries that have hit don't get many of us excited about the schedule they will face over the next few months.   This is the time for guys like Kemp, Gonzalez and Ethier to carry this ball club, but there aren't any signs that will happen.  Losing to a team that should be a basement dweller like the Padres is a concern, as this is really a soft part of the schedule.


So as band wagon fans jump off the Dodger bus in droves as the Dodgers go through their first losing string of the year and tumble back to .500, I’ll switch gears as this team we follow with such loyalty is completely depressing me.  I could address the injuries, the slumps the bullpen failures and the questionable lineups.  But the struggles will happen over 162 games and re-group is a constant during the season long marathon.

Tomorrow is another giveaway day at the Stadium, something that I usually look forward to if it happens to be a game I'm attending.  I love collecting Dodger giveaway collectibles as most do.  They could hand me a frayed apron, held together by a couple of strands of twine, slap a flying baseball Dodger logo on it and suddenly that $1.50 worth of shredded cloth is a super cool grilling apron.

Give me a cheap plastic license plate frame with an interlocking LA logo on it and I'll attach that thing to my vehicle because I think it looks great.

A giveaway Dodger beach towel is hanging in my bathroom and it's about as ratty and worn as any towel I own.  My wife has a collection of plush towels from Bed Bath and Beyond that are of top quality.  I don't touch those things, 'cuz my Dodger towel is there.


I think it's safe to say that with the exception of the ceramic Dodger figures an occasional replica award giveaway and the bobble head dolls,  the give away trinkets from Dodger Stadium aren’t high end items of premium quality.   But so what? Give me that cheap plastic license plate frame, the t-shirts, beach towels, flimsy caps, fleece blankets, plastic super hero figures and sweatshirts.  Cheap quality.  But what do you expect?  They give out 50,000 of them?  And you know, every single item is awesome and something I want to own.  It has been the same since I was a little kid.

That is, every item with the exception of.....(drum roll)..... Hello Kitty Giveaways.

I will say it until my last day on earth.  There is absolutely no place for a Dodger “Hello Kitty” doll. 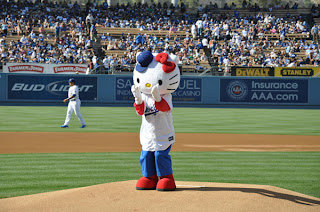 I understand that little kids love them.  I get that.  But come on guys.  Who are they marketing to?  Three year old children?

I guess they are.  Future Dodger fans of America.  The same demographic that plays is t-ball games where they don't keep score.  OK, that's my rant.  I'll probably get in trouble here, but the Hello Kitty promotion isn't my cup of tea.

Have you noticed though?  The Dodgers haven't been in post season play since the Sanrio Hello Kitty promotions started.  Call it the Curse of the Kitty.