A Look At Some Triple A Stats

Two consecutive wins makes the recent Dodger slump a bit easier to take.  What a great game by the teams most inspirational player this year, Mark Ellis.  In all honesty I was preparing a piece calling for sending Sellers and Cruz back to Triple A Albuquerque and viola, Sellers wrapped out three hits raising his batting average from  .170 to .220 in a two hour period.

One game really hasn’t changed my position on Sellers, who I believe is a good team guy that can’t hit himself out of a paper bag, but with Hanley Ramirez’s return apparently a lot closer than we originally thought, I suppose he should stay until his return.  He does play good defense providing a steady glove up the middle.

Dodger brass believed that it would be in Dee Gordon’s best interest to go down to Albuquerque and play.  That he has, putting up some impressive offensive numbers over 78 plate appearances:

Those are the types of stats we all hoped Dee to produce, and though it’s a relatively small sample size, it’s a great start from the offensive side.  However, Dee’s 7 errors over 17 games show that he still has a lot of work to do as his glove remains to be something to worry about.  Perhaps the shortstop position should be reconsidered with Gordon.

Now regarding Luis Cruz.  His .087 start over the first 50 ABs this season is a real concern.  The league has figured him out and exploited his weaknesses.  He’s first pitch swinging constantly.  He’s a pop up machine and his confidence is shattered.  Blogs have been bashing this guy hard the past few days and I don’t have much positive to say about him either except defensively, he can pick it.  Luis might need a trip to AAA to regain his confidence and his swing. 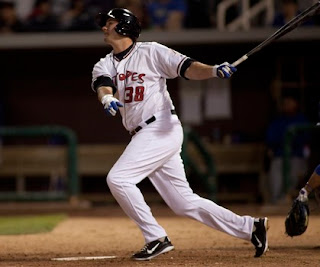 And speaking of Triple A Albuquerque.  Scott Van Slyke, a player with no open position option with the Dodgers is tearing up the PCL.  I’m almost convinced that the Dodgers could use his bat off the bench as they have no real power threat amongst the current reserves.  Van Slyke is not even on the 40-man roster currently.

His stats so far:

Alex Castellanos has had a decent start as well: