When a Dodger Fan Can't Speak Up About the Rivalry

I’ve got this dilemma.  It’s one that has forced me to hold my tongue.  One that has me ignoring that heated rivalry.  A situation that keeps me grounded and understanding that sports is just that, “the toy department of life.”  But man!  This is a tough one for me. 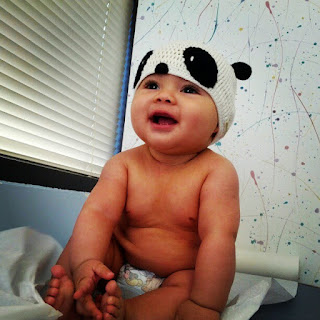 I have a grandson that is pure joy, and I’m blessed that he lives in my home.  His name is "Hiero."  A unique name that he was given that even makes him more special, in my opinion, because there is definitely only one Hiero out there.  I have to say, this kid is cute.  I don't just say that because I'm his grandpa.  I say it because he really is a cute baby.  Probably the cutest I've ever seen.  I'll let you judge, the pictures don't lie.

When I get home, I can spend hours playing with that little guy.  He just wants to be tossed in the air, jump up and down, laugh and smile.  His laughter makes my day.  His funny faces and gestures are hilarious.  When he cries or he’s sick, he has a wail that melts your heart.  I could easily say that being with that little boy is the highlight of my day.  Here's my dilemma...he’s going to be the biggest Giant fan on the planet and there’s absolutely nothing I can do about it.

You see, Hiero’s dad is about as big of a Giants fan as I'm a Dodger fan.  So big a Giant fan that he has this big ugly tattoo of the Giants logo across his back from shoulder blade to shoulder blade.  Over the years, I have been able to keep the rivalry in check in our household.  I’m able to keep quiet if the Dodgers beat the Giants.  I can’t say the same for Carlos, but I think he tries to be civil with me.  There's a mutual respect and additionally, we like each other too much to really lay it on too thick.  Each of us live and die with our team, and we each know it.   I try to take the high road when it comes to the rivalry.  And what can I say?  The Giants have had the better of us for a few years.  There hasn't been much to brag about.

So sadly, my love for the game I won’t be able to share with my grandson, because he’ll be a Giant fan and naturally he’ll be taught to hate all things blue.  In fact, I’m pretty sure that the blue outfit my wife bought for him today will be exchanged or returned because...well, it’s blue and that color is usually taboo in Hiero's wardrobe.

Sure, I could go out and buy him Dodger stuff, but his parents will never allow him to wear it.  There's no point in it.  The boy is doomed to wear orange and black (and 49er red to some extent too).  When his dad painted his room orange and black before he was born, I knew it would be a lost cause to bring him over to the blue side.  Truth is, I couldn't do that to his dad either.  He's a good man and it simply would be wrong of me to attempt to convert his son to Dodger loyalties.

What can I say?  There's nothing that can be done without starting a war in the household.  So now that Hiero's dad is starting to plan his first birthday party, which is 5 months away.  He's picked the theme.  Yes, it'll be a San Francisco Giant theme.  And guess what?  He wants to celebrate his birthday at AT&T Park.  Of course, they are playing the Dodgers that day too.   And for the party...for a fee he can have an appearance by that annoying Seal mascot.   Wonderful.  If I show any sign that I'm a Dodger fan, then the hatred will come out against me like a vengeance.  The Seal will badger me to no end.  So I'll lay low and keep quiet though inside I'll be enduring all those ugly Halloween colors.

Can't we go with a G.I. Joe or a Clown theme for his birthday?  Come to think of it, why do birthday parties have to have a theme anyway?  He'll be one year old.  It isn't like he'll remember any of it.  Well maybe he will.  When kids endure extreme trauma, they usually remember it.  (OK, that was cruel, but I couldn't resist).  Man, I hate the Giants.

With that said, I’ll move on to baseball and Dodger news.

Eric Stephen at TRUEBLUELA.COM writes that Carl Crawford expects to be ready by opening day and that he is already tossing the ball around, at 45-60 feet distance.  That’s good news.  He  says that the only set backs have been some soreness attributed getting his muscles back in throwing shape.  Also, Crawford reports that his wrist injury from last year will have to be watched.  Carl is said to be using sliding gloves for when he runs the base paths.  Once again, the head first slide injury risk raises it’s ugly head.  Why can’t guys go in feet first anymore?

Also, Crawford is claiming that he has no issues batting first in the lineup.

More good news is that Ronald Belisario is in camp and has been for several days.  Maybe Belisario has learned his lesson and matured.  With his release from his Venezuelan Winter League team during the season, things didn’t look good in that aspect, but Belisario seems to be sincere in his attempts to remain a major leaguer and to capitalize on a potential big pay day.