There’s not a lot to write about as the surprises at Dodger camp have already arrived.  First it was Belisario who has been on his best behavior and finally understands the importance of being to camp on time.  Then there was Billingsley who thus far is showing no signs of a significant injury so far.  Photo day arrived and we saw a lot of pictures of guys that probably won’t be with the club beyond the day they break camp at the end of March.

Nothing caught us by such surprise though than the arrival of Sandy K. to camp.  We knew he was back to the organization, but on the first day that position players reported here he was.  That was a quick arrival.  The fanfare and excitement was to be expected.

I think I somewhat understand Sandy’s reluctance to return  to the organization.  The jungle atmosphere that erupted when he arrived was precisely what he is uncomfortable with.  His quotes from yesterday tend to hint that this return is a bit of an experiment, to see if he likes it.

Eric Stephen from TrueBlueLA.com tweeted a few of his quotes shortly after his arrival: “The hard part is, my life is good...I thought, Do I want to kind of open it up to all of this again?  I decided to give it a try.  I’m on a one-year contract, so if I’m not enjoying it, it’s only a year.”

The way I interpret this is, Sandy likes the baseball part.  He loves being around the guys and helping the kids out.  It’s the attention he isn’t comfortable with.  When all hell broke loose amongst the autograph seekers yesterday, I immediately started thinking that Sandy isn’t going to want to have to deal with that, and it might just drive him away.

Shortly after Jane Leavy wrote the unauthorized Koufax biography, Sandy Koufax, A Lefty's Legacy, that was released in 2002, she addressed Sandy’s reclusiveness in an SI.com interview, saying “he was very much a team guy and he was about as relentless a competitor and as tough a physical specimen as you might find in professional sports.  What makes him different is he does not have a craven neediness -- so common in modern sports and modern celebrity -- to be recognized at all times, to dominate every place he goes and every conversation he’s in.  In fact, I think quite the contrary.  He’s a human being who would like to just be one of the guys, and the irony of his life and his career is that his talent precluded that one thing that he probably wanted to be more than anything else: just a regular guy.”

Leavy, who met briefly with Koufax, seemed to have convinced Sandy that her work would be a scholarly, honest and comprehensive work.  She said that when he realized that it would be a fair portrayal of him, he opened up a bit more to the idea.  “Once he realized we were going to go ahead with it, he said, ‘Well, I’d rather it be done right.’ And to that end he gave me access to his friends, which was no small item.  And he agreed to verify certain matters of personal biography.  That was invaluable.” (SI.com Interview linked HERE)

She spoke of a one to one meeting at a Vero Beach restaurant with him in 1999, above the booth they shared for the interview was a photo of Sandy and John Roseboro embracing as they celebrated their 1963 Series sweep over the Yankees.  Leavy noticed that he refused to look up at it and finally she asked him, “‘Sandy, how could anyone look at that picture and think you didn’t love it?’”  With that Koufax looked up and said. “‘I absolutely love it.  How could you do the things I did and not love it?’”

The camaraderie with his teammates.   The achievement of an ultimate goal and becoming World Champs.  That was something that Sandy lived for.  So much so that he pratically gave his left arm away in doing so.  Ira Green, the father of Shawn Green said it best, “How could people not understand this guy?  He gave everything for his team.  He gave up his career.  He gave up his arm.  He was unbelievably stoical in the face of it.  Even his teammates had no idea how bad it was.”  And it had to be bad.  The man retired after a 27 win season and a 1.73 ERA  The shock of it all didn’t really set in until after he retired, and how many of us thought...”Ah, he’ll come back.  He’s only 30 years old.”   It didn't happen because he seriously was on the verge of losing the use of his left arm. 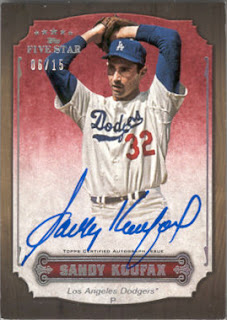 Many of us forget that Sandy was a roving minor league instructor with the Dodgers for 12 years from 1979 until 1990.  That was a long time.  He was a fixture at Spring Training and a valuable contributor to many championship team contributors.  One thing that he has really enjoyed is the teaching aspect of the pitching craft.  Even after ending his stint with the Dodgers, his appearances at spring training camps have been valauble and appreciated.  Even if it was just one day.

If Frank Jobe had been around at the tail end of Koufax’s career, who knows?  Maybe he could have continued pitching for five or six more years.  Jobe has seen Koufax in action teaching pitching motion and proper throwing mechanics.  He commented on it to Leavy saying “This guy was way ahead of science.  He understood things about the mechanics of pitching and pitcing correctly, and ways to minimize injuries.”

As Dodger fans, we must consider the blessing of having Sandy in the Dodger fold.  “This is the only organization I’ve ever played in, and been in,” he said yesterday before a throng of reporters.  I want to see this organization be a winner again.  I don’t know if I can do that much, but I’ll try and help.”