Piazza Appears in the Most Subtle of Ways

I write this while waiting to board my flight at Phoenix’s Sky Harbor Airport for home.  It has been an exciting 4 days at CBR, and today was no exception.

You never know what to expect at the Ranch.  It was Monday, and a ho hum day for the most part.  Yes, the Dodgers would have their first locally televised game meaning that Vin Scully would be present.  But it was a Monday event.  The weekend fanfare of so many Angelinos taking the trip east had worn off.  When I arrived this morning, there were easily 75% less fans present.

Then there is the World Baseball Classic’s Team Italy that has been present at the Dodger facility for days now.  We all know that Mike Piazza is a hitting coach for that squad, but he wouldn’t possibly make an appearance at Dodgertown Glendale a week and a half after the release of he book in which he blamed Vin Scully for his falling out with Dodger fans in 1998.  Or would he?  Well, we got the answer.

Mike did appear, and he slipped past many fans who had no idea that he was there.  The few that recognized him asked him to sign and he said he'd get them on the way back, (whenever that would be). 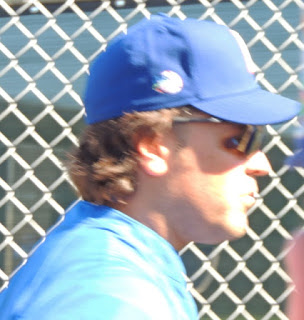 We had seen it all week.  The Italian team members, made up primarily of minor league players from several organizations would slip past the fans with nary a inkling of attention from Dodger autograph seekers.  Fans were seeking out Hanley or Kemp, McGwire and Koufax.  There was no interest in the Italian team, also wearing blue.

So a group of us, slipped away from the game as the non-roster invitees and minor leaguers were inserted in the lineup in the late innings.  We waited where the Italian team had to pass in order to enter into the Dodger administrative offices.  At a few minutes before 4:00 pm, he reappeared and he kept his word, signing for a very positive group of Dodger fans, about ten or twelve.  When one of the Italian coaches attempted to rescue him from the few fans seeking autographs saying, "Don't forget Mike, we have a meeting," Piazza told him he would be there in a few minutes after he finished signing.

It was a great gesture from a player that had a short time ago expressed concern about ever returning to Dodger Stadium to be recognized, for fear of the possible boos.  Piazza was cordial, polite and accommodating.  He signed for most everybody and continued on his way.

Did he see Vin Scully?  Now that would be a real interesting scenario.  I doubt it played out.