CBR Visit and About Autographs

So I made it to Camelback Ranch today.  I got this great photo of Matt Kemp. 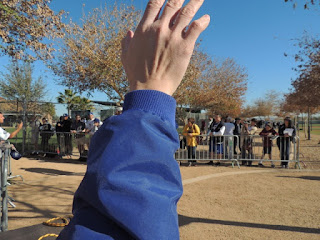 Uh, I swear to you, he's behind that arm and hand.  That is the hand of my son, who was attending his first Spring Training in 8 years.  Needless to say, at age 23, he still gets excited at the sight of seeing his favorite player.

Anyway,  I believe that this is my 7th Spring Training.  I know it's my 2nd at Camelback Ranch (CBR).  I think I had more fun today than I have in a long time, because I got to watch my son get excited again.  Just like it was in the old days.  There's something special about getting the opportunity to interact and converse with players and coaches in this informal fan friendly environment.  Though there was no game today and the guys were simply practicing, there is a noticeable increase in crowd size this year, and I think we can attribute much of that to the enthusiasm of the new ownership.   There is also the Koufax factor as well. 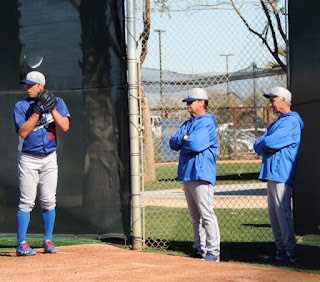 So let me just say this, and it's a personal observation.  There are a lot of twenty-something year old guys that are simply working on behalf of autograph brokers or in the game simply to buy and sell sports paraphernalia.  These are the guys that will ruin the enjoyment of us real fans, that collect stuff, due to our love of the game and our team.

I watched my son stand in a line for a Don Mattingly autograph and saw 15 guys there with every piece of Dodger artifact under the sun that was prepped for a signature.  They are accompanied by a photographer that snaps a photo to authenticate the signature.  This is a big business.  Sadly, I think that one day these guys will go too far and force the Dodgers to change their open-autograph policy that makes their organization unique from the rest of baseball.

The White Sox, (the other CBR co-tenant), were working out as well, but their operation is night and day when compared to the Dodgers.  It's a ghost town over there.  There is no access to their players.  It's a stale environment and all business over there.  That might be a good thing in the long run for an organization as distractions are brought to a minimum, but it sure doesn't make things very fun for their fans.

When the Dodgers moved to Arizona, it was with a promise that the team would continue to allow the fans to have access to the players for autographs and interaction.  That promise has been kept.  What has resulted is that the autograph hawks and vultures have honed in on CBR.   I watched Skip Schumaker chastise one of those hawks for cursing when he passed him by without signing something in favor of a child.  Skip politely told the guy that he was inappropriate and that there were children present.  The thing was, the autograph hawk wasn't even phased by it.  It should have been an embarrassing moment for him and he just schluffed it off and moved on to the next player for an attempted signature grab.  These guys are without feeling.  They'll cut in front of you, children even, all for the almighty dollar.

I see players like Clayton Kershaw who will rarely sign for adults, and who can blame him?  I'm sure he has his reasons, but the autograph vultures have to be the primary reason why.

Hey, I like a good autograph as much as anybody.  I have a rather prominent collection of signed stuff that I have in my office at work.  But I get more pleasure in handing a child a card of an approaching player and seeing him get that autograph.  There are few moments more magical than that, seeing a child converted to Dodger fandom and connecting with a professional ballplayer.

Years ago I'd take my son to games and he'd get his share of signatures.  He developed his Dodger loyalty in those moments, something that I'm sure he'll pass on to his son, if and when that ever happens.  Just as my dad passed the passion on to me.  This sport is so much more than 60 feet 6 inches, working the count deep and double switches.  It's about family, passion and fun.  I was reminded of that today at CBR, I just hope the autograph vultures don't ruin it for all of us.