The reports are out by most Dodger blogs on Bloggers night.  I attended as well.  This time I caught a flight to LA and didn't drive.  After the event was over I returned to my hotel room near LAX at 12:30 am.  There was so much to discuss on this forum.  I immediately started up on a summary of the event.  I actually fell asleep writing the piece, if you can possibly believe that.
I awoke to the sound of my 5:30 am alarm to find my laptop sitting there by my side, completely out of power.  Unfortunately I left my battery charger behind at home.  I had an early morning flight back to the Bay Area, so I hurried up, showered, changed, checked out, returned the car rental and was off to the airport.
As I peruse the Dodger blog sites, I must say that they all covered the highlights that I wrote about before nodding off, so I sit here in frustration trying to decifer what to address.  Take a look at Ron Cervenka’s post at Think Blue LA.  I believe he nailed all the key points and probably had the most detailed and comprehensive write up on the night:
THINK BLUE LA post LINKED HERE
A few things that I noted that were of a bit surprising:
*Ned Colletti was asked in detail about the Yasiel Puig signing and he told everyone that Dodger scouts believe that Puig merited that huge contract because he’s better than Soler (who signed with the Cubs).
*Stan Kasten spoke of the ancient infrastructure within Dodger Stadium that is in deperate need of repairs.  Specifically plumbing and electrical.  Everything is fifty years old, and some big money needs to be spent on replacing it all and modernizing it.
*One of the biggest problems Kasten’s group faces in creating a Dodger museum is the configuration of Dodger Stadium.  Where could such an important addition be added that can be easily accessed by all fans?  Any ideas?
*I was glad to hear from Kasten that he agrees that the backdrop of Dodger Stadium, beyond the outfield walls with the hills and San Gabriel mountains is something he never plans to tinker with.  Stan values that panoramic view and recognizes that it is one of the things that makes Dodger Stadium such a great place to see a ball game.
It should be noted that the one question I was able to get out to Ned Colletti was about the status of Rubby De La Rosa.  Colletti reported that they hope to have De La Rosa back before September and that most likely he'll be an addition to the bullpen, but they'll monitor his progress and see where he is.   Last year at the blogger event, De La Rosa was a big topic of discussion, and he went down with injury shortly thereafter.
Ron Cey
The highlight of the evening for me may have been some of the time a few of us had to simply chat old time Dodger baseball with Ron Cey.  Ron is engaging and personable.  There were a number of things that he asked us not to include on our blogs, and I’ll respect that.  I must say though that I found much of what he had to say rather tame and not inflammatory in any way.  Ron is simply an honest guy and sometimes telling the truth can get you in trouble.  That kind of happened to him last year at the blogger event, so it is perfectly understandable. 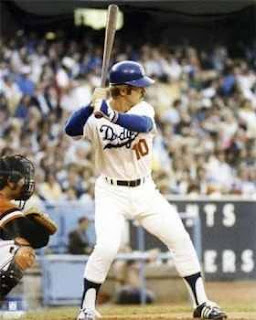 Cey isn’t shy on giving us his opinion and he’s proud of his career and his accomplishments as a player.  We were talking about how he was such a Giant killer and he mentioned to us that Ross Porter pulled him aside one day and told him that as a visiting player in San Francisco, he is # 2 on the all time home runs list (behind Hall of Famer Willie Stargell) and he’s number one on the RBI list.  As a Bay Area resident, when I speak to Giant fans that have followed the game for a while, there is one thing that they all agree with: they can’t stand Ron Cey.  That’s because he had so much success against them.
Ron spoke of the differences in ballparks of today versus those that he played in.  He noted that such places as Candlestick, the Astrodome, San Diego’s old Jack Murphy Stadium, St. Louis’ Busch Stadium, Montreal’s Olympic Stadium, Dodger Stadium and Shea Stadium were all big parks that were difficult to hit in.  Cey was rather modest when it was mentioned to him that his numbers would have been much better if he played in today’s bandboxes.  He was a OBP guy in a time that nobody looked at that valuable statistic.  There is no doubt that a player like Cey in today’s market would be in the top tier of players that teams would be seeking to acquire.
Other topics Cey spoke of were:
*the old crushed brick infield surfaces that Dodger Stadium used to have and how hard and unforgiving it was to infielders.
*the amazing accomplishment of the 4 Dodger hitters that he was a part of that hit 30 homers in 1977.
*the Dodgers-Reds rivalry from the 1970s.
*playing on astroturf and how it beat up the players.
*Cey’s participation in the Dodger baseball fantasy camps and that he will do it again this year.
I have always loved talking about Dodger history and remembering the great years of the past.  Having the opportunity to do so with a classic Dodger like Ron was a real fun experience and we all appreciated his attendance.  The Dodgers really have a gem in retaining Ron Cey in the public relations department and on the speakers bureau.
**************************************************
It was great to see Roberto Baly from Vin Scully is My Homeboy.  I'm happy to see him regaining his strength.  Roberto is simply a good person and I'm glad to be able to call him my friend.
**************************************************
A special thank you to the Dodgers for hosting this great event, (their fifth annual bloggers night), and for their continued support of the Dodger blogging community.  The organization is easily the best in baseball at recognizing a lot of us that put in much time from our lives with little to no compensation out of love, dedication, and enjoyment of Dodger baseball.