As the Dodgers embark on a ten game road trip, and another tough one at that, rumors circulate about a potential trade with the Cubs for Ryan Dempster and perhaps Bryan LeHair and Matt Garza.  Sources are reporting that the Cubs want Zach Lee on return.  Names are being bandied about but there's one thing I like about obtaining a player like Dempster.  He has made it known that the Los Angeles Dodgers are his preferred team to be traded to. 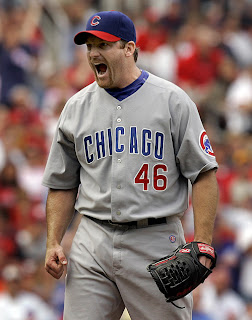 This isn't a Carlos Lee situation.  This guy wants to be a Dodger and that is half the battle.  Sheffield didn't want to be a Dodger. Neither did Brian Jordan.  Kevin Brown needed to be bribed with incentives and free private jet charters.  Ryan Dempster, wants to come to Dodger Stadium
There was a time when almost everyone wanted to be a Dodger.  Los Angeles was viewed as an ideal playing spot due to the weather, the winning tradition and what was perceived to be an environment that wasn't as pressure packed as some east coast destinations.   It also was home to many major leaguers. Failing to win a World Series for 24 years tends to make things change.  Though a high percentage of the league is from the Southland and many grew up Dodger fans, we seldom hear of free agents clamoring to play in Dodger blue.  The Yankees, Red Sox, Phillies and even Mets are often their destinations.
One last thing about Dempster that is a concern though.  He has currently pitched 33 consecutive scoreless innings.  The probability that he continues on such a run is unlikely.  Too bad he has had this amazing run in Cub blue.  Bringing a five pitch arsenal to Dodger Stadium will be quite an addition.   He would bring a lifetime 1.95 ERA at Dodger Stadium to the team.
******************************
Back Like Old TImes-April Revisited
The start of the season was a long time ago it seems but on Wednesday afternoon we had a taste of Spring return as Matt Kemp reverted to his old April self.   First, by legging out a single to prolong  the contest in the 10th inning and second,  by blasting a Jake Diekman fastball into the Right Field Pavilion for the game winner two innings later.
The other day while in the suite for blogger's night, a few of us were talking about Piazza and his greatness as a Dodger.   Specifically the discussion led to the shots he would hit to right center field.  Inevitably Matt Kemp was compared.  They both have tremendous strength and are similar types of hitters.   I'm not insinuating that Piazza was juicing and I have no evidence to prove that he did, but we all know the era in which he played and that not PED testing took place then.  Kemp is doing what he does, and we are certain he is clean.
Now with series' to be played in New York, St. Louis and San Francisco, Kemp will be the guy that teams will decide to not let beat them.  A lot will ride on Ethier to provide him protection.  Ten more crucial days in the schedule with a lot riding on it.
Posted by Evan Bladh at 9:36:00 PM