What a Difference Three Days Make

The impact of this AT&T Park sweep has resulted in a confidence booster and momentum swing that I never imagined.  As the Dodgers went into San Francisco three days ago on a three game losing streak, I was just thinking that they needed to avoid the sweep.  Even losing 2 of 3 I could have accepted as I knew they’d still be in the pennant race.  The resulting Dodger sweep of San Francisco has done something I didn’t expect - it has demoralized the Giants.
These were three games that had a six game swing.  A Dodger collapse this weekend would have resulted in them being six games out of first.  Instead they return home tied for  the division lead.  At seasons end we’ll probably look back and say that the season changed on July 27-29th.


How could the Giants not be demoralized?  The Dodgers went out and acquired a superstar who’s value was seen as low due to 1 1/2 years of substandard play.  Hanley Ramirez has shown in the past 5 games that he still has those flashes of brilliance and is a valuable contributor to this team.
The Dodgers are in on virtually every trade deadline rumor there is and their purse strings are limitless.  Meanwhile the Giants went and traded for a 36 year old past his prime infielder and they are limited financially by who they can pursue.  There has to be concern about that in Giant-ville.
The Dodgers came in to town and defeated the Giants ace with an unknown rookie on Friday, followed by a 10-0 blowout on Saturday and a shutout victory by Kershaw on Sunday.   San Francisco finished the series being shutout for 20 consecutive innings.  Since Hanley Ramirez’s game winning homer on Friday night, the Dodgers have outscored them 16-0.
Is it a wonder that the Dodgers took the crowd out of this series?  They had nothing to cheer about and were a complete non-factor.  I almost forgot that they chant “Beat LA” up here.   The Giants post-game talk shows have been depressing affairs the past few days.  The fan base even senses it and is near giving up on the season.  At least that is what I sense from the callers and fans I have spoken to in my workplace. 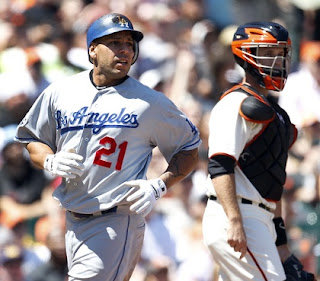 It has been shocking to say the least, especially when you looked at how things were just prior to the Ramirez trade.  I’ve been around long enough to know of the ebbs and flows of a long baseball season.  The Giants certainly aren’t out of this, especially when you consider their starting pitching, but they are reeling at this time.  The Dodgers need to pounce on this and take advantage of their crisis of confidence at this time as they leave San Francisco.
I only wish that this had been a four game series, because the Dodgers would have taken another one from them, given the opportunity.
Posted by Evan Bladh at 4:17:00 PM