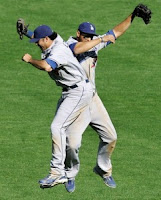 Official Press Release
November 1, 2011
ANDRE ETHIER, MATT KEMP AND CLAYTON KERSHAW CAPTURE RAWLINGS GOLD GLOVES
Kemp wins his second while Ethier and Kershaw win their first as the Dodgers establish a franchise record with three Rawlings Gold Glove Award winners
LOS ANGELES – The Los Angeles Dodgers and Rawlings today announced that right fielder Andre Ethier, center fielder Matt Kemp and pitcher Clayton Kershaw were awarded the National League Rawlings Gold Glove for their respective positions. Kemp captured the second Rawlings Gold Glove Award of his career, while Ethier and Kershaw were honored for the first time.
The Dodgers’ three Rawlings Gold Gloves established a club record, surpassing the team’s two winners in 1959, 1961, 1971, 1972, 1974, 1975, 2004 and 2009. It’s also the first time in club history that two outfielders have been awarded Rawlings Gold Gloves in the same season. Los Angeles ranked third in the National League with a .986 fielding percentage last season, which was the Dodgers’ third-highest team fielding percentage in franchise history behind only the club’s marks in 2004 (.988) and 2009 (.986).
Kemp won his second Rawlings Gold Glove Award in the last three seasons after being honored in 2009. Kemp and Ethier became the 10th and 11th Dodger outfielders to win the award as a Los Angeles center fielder took home the prize for the fifth time (Steve Finley, 2004 and Willie Davis, 1971-73). The two are just the fifth pair of NL outfield teammates to win the award since 1990.
Kemp led all National League center fielders and tied for third among all NL outfielders with 11 assists in his Major League-high 1380.0 innings played in center field this season. Since 2008, the 27-year-old ranks fourth among Major League outfielders with 44 assists.
Ethier played 1,091.1 innings in the field without committing an error this season and joined Philadelphia’s Shane Victorino as the only National League qualifiers at any position with a 1.000 fielding percentage. The duo are just the third and fourth NL outfielders in history to win the award with a 1.000 fielding percentage. Ethier led all Major League right fielders with a .903 zone rating and tied for 15th among NL outfielders with eight assists.
It was Ethier’s first Rawlings Gold Glove Award as he became just the second everyday Dodger right fielder to win the honor, joining Raul Mondesi (1995, 1997).
Kershaw was honored with his first Rawlings Gold Glove as he became the sixth Dodger pitcher to win the award and first since Greg Maddux in 2008. Additionally, Kershaw is the first pitcher to win a Gold Glove while playing an entire season with the Dodgers since Orel Hershiser in 1988. The 23-year-old pitched 233.1 innings without committing an error, which led NL pitchers, and also led the circuit with nine pickoffs.
The Dodgers have now won 41 Rawlings Gold Glove Awards in their history, led by Wes Parker’s six consecutive awards at first base from 1967-72.
Rawlings established the Rawlings Gold Glove Award in 1957 as the greatest measure of fielding excellence.  The award is presented annually to 18 players – one for each position – in both the American and National Leagues.  Winners are selected by Major League Baseball managers and coaches prior to the conclusion of the regular season.  Managers and coaches may not vote for players from their own club and can only vote for players in their own league.
This year, for the first time ever, Rawlings will hold a Platinum Glove Award fan vote, where fans across the country will decide who the best defender is from each League.  Voting will take place on Rawlings’ Facebook page (www.facebook.com/rawlings) at the conclusion of the announcement show and will end at 11pm ET/10pm CT on Monday, November 7, 2011. The Rawlings Platinum Glove Award winner from each League will be presented with their trophies during the 2011 Rawlings Gold Glove Award Presentation Ceremony presented by Gold Sport Collectibles on Friday, November 11, 2011, at The Pierre in New York City.


I love that Dodgers are getting awards, I really do, but seriously, did Andre Ethier really deserve a gold glove award?  I know his UZR improved and he made no errors, but wow.  I really didn't even think he was being considered for such an honor.  Kershaw certainly deserved the hardware.  He's got the best pickoff move in the business.  Matt Kemp again showed flashes of brilliance out there but I must say that I'm surprised that he won it.  I think many of us would agree that he continues to have those mental defensive lapses.


I never saw these awards coming.  Frankly, I believe that James Loney probably deserved the Gold Glove for his work at first base.
Posted by Evan Bladh at 9:24:00 PM