Anything Positive from the McCourt Era?

Will there be anything positive that Frank McCourt will be remembered for? Ten or fifteen years from now, what will be his legacy as the Dodgers owner?  Yes, I know all the negatives, but what about the psotitive. I know I have to dig a bit deep, but I came up with some positives and some other things, not so positive, but certainly unique.
The Original Color Palette 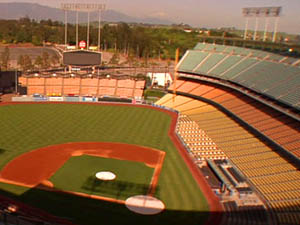 McCourt made efforts to return Dodger Stadium to it’s original state.  Digging into archives and actually replacing every seat to its original Stadium color scheme.  It was a nice move and interesting return to the origins of the Stadium.  A good move. 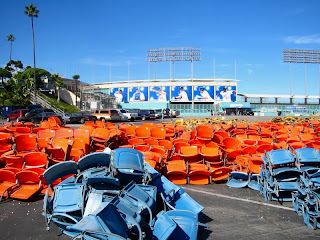 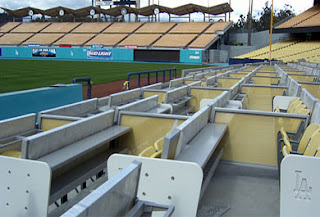 Now some will disagree with this change.  Essentially McCourt created a new tier of expensive seats and screwed over those original season ticket holders that were as close to the action as possible by creating seats in front of them.  I believe despite his true intentions, which were to create more revenue with expensive seats closer to the field, the change was for the better.  The removal of the Mike Brito seats, ground level dugout seats directly behind home plate was a good idea.
Return of Celebrities to Dodger Games
In an effort to become more Laker-like, McCourt's ownership loaded the seats behind home plate with celebrities.  Mary Hart, Larry King, that soap star that always loses in the Emmy's who's name is escaping me now.  Heck even Nicholson was there sporting a Yankee cap when the Bronx Bombers came to town. 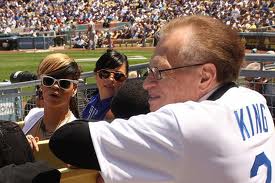 McCourt was a master at this.  Essentially, he was able to purchase players with deferred contracts and obtain star players during stretch runs for next to nothing.  That is if you threw in a Carlos Santana in the deal.  I guess this wasn’t such a positive.
Attempts to complete a BoSoxization of the Dodger Organization 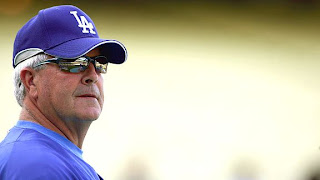 Let’s face it.  McCourt was  Red Sox fan.  He came in and wanted a young sabermetric guy like Epstein, so he canned Dan Evans and hired Depodesta.  He brought in Bill Mueller.  He hired Grady Little.  He went after Manny.  He hired a guy to start up an 8th inning tradition like Boston’s singing of “Sweet Caroline” and we got that stupid Journey song tradition.  The biggest day at Dodgertown Vero Beach would be when the Red Sox came to town and the concession store filled up with Red Sox gear.  Deep down, McCourt wanted to turn the Dodgers into the Red Sox.
Innovative ticket plans
Over the past few years, the Dodgers came up with some innovative partial season ticket plans.  I don't seem to remember them being so creative during previous ownerships.  One of which was....(see below)
Bleacher Beach 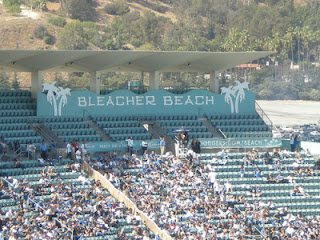 Let’s see.  We have these really crappy seats, way out down the left field foul line four levels up in the corner.  True Bob Uecker seats.  Let’s toss out some beach balls, sandals, cheap beach blankets, some bbq chicken, punch, Hawaiin shirts.  Then we'll squirt some misty water on the fans, have vendors dancing around to Beach Boys music and play with some hula hoops and we'll and call it "Bleacher Beach."  Probably the dumbest promo I’ve ever heard of.  Yeah, when I think of McCourt I’ll remember Bleacher Beach.
Women Initiative Network (WIN) 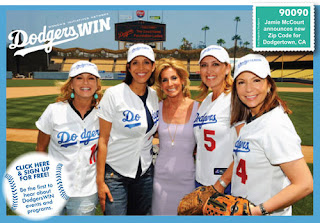 Well this was Jamie's contribution to the organization.  A reach out to provide specific programs for women.  It had its moments while it lasted, but when Jamie departed, so did WIN.  One thing that it accomplished -  Jeff Kent was quite a hit with the women.
Bringing Back the Trolley Car 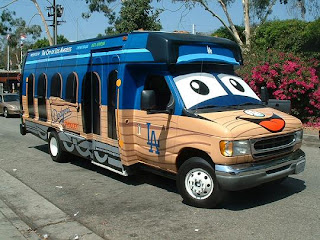 For a short period of time the Dodgers attempted to create a trolley car/bus that commuted fans from Union Station to the ballpark.  Unfortunately, this wasn't something tha McCourt was financing.  He got the city to do it and when the city balked on doing it for additional years, the trolley bus said goodbye.
The Coliseum Game 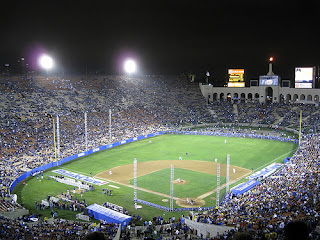 In a publicity stunt and an attempt to bring back nostalgia.  The McCourt ownership scheduled an exhibition game at the L.A. Coliseum against, you guessed it, Frank's favorite team, the Red Sox.  It was an attempt to set an attendance record which I believe they did.  Never mind that parking was a fiasco, the left field foul pole was even worse than in 1958 and about 200 feet from home plate and the shuttles from Dodger Stadium got fans to the game as late as five innings into the contest.  A good idea for one night though.