A Facebook Reconnection Brings Forth a Great Story About Sandy Koufax

I was browsing through Facebook, as I do every once in a while, linking up old friends from High School.  I came across  Liz Vargas Hambly , who actually was in choir with me and after reconnecting she reminded me that she was my dance partner on a few numbers we did. I looked at some of the pictures she has on her page and was blown away when I came across this. 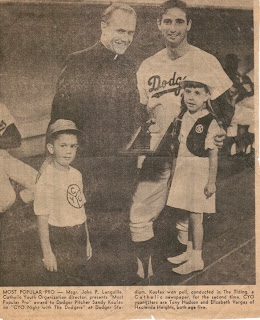 There's  Liz , as a five year old, posing with Sandy Koufax.  It made me want to ask for her autograph.
Instead I got a wonderful story from her about her good fortune at meeting the Hall of Famer.  With her permission I post her story here.  Liz told me that wishes that “it was more eloquently relayed,” but I really don’t think it even needed to be edited.  Here is her story as she told it to me:
“...In 1965, my dad was a division director with the Catholic Youth Organization.  Pop later became the first lay Executive Director of the agency.   Walter O’Malley forged a wonderful relationship with CYO and the Tidings, the result of which was "CYO Night with the Dodgers". On that night, the winner of the Tidings “Most Popular Pro” poll was awarded a plaque. Sandy Koufax, of course, was the recipient, (runners up were Maury Wills, Don Drysdale, and Ron Fairly).   Msgr. John Languille, CYO Executive Director, was there to present the award, along with 5 year-old, Tony Hutson, a nephew of CYO Assistant Director, Father Hutson. (Note: Hutson was misspelled in the paper.)
Apparently they wanted to balance out the group with another 5 year-old. They knew my pop had 7 kids…figured he probably had a 5 year old running around somewhere…lucky me!   Although my pop will tell you I was chosen because I possessed that special something they were looking for.
I remember having photos taken on the field and in the dugout. I remember a clown giving me a piece of bazooka bubble gum, which I promptly split in half to share with my dad. I also remember how nice Sandy Koufax was; he was kind of my partner in the pictures. I should have felt intimidated by the big scene, but he had such a gentle demeanor, I don’t remember being nervous at all. I probably wasn’t aware of what a really big deal it was…I just knew I got to spend special time with my pop. 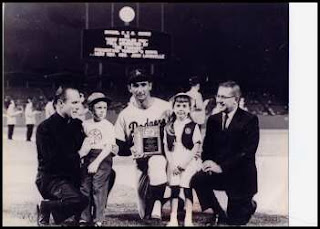 These photos hung in our hallway throughout my childhood and young adulthood, and eventually I realized that, not only was Sandy Koufax a really, really nice man, but it was a great honor to have stood beside him. After all these years, I still have the hugest crush on him. Then again, who doesn’t, right? 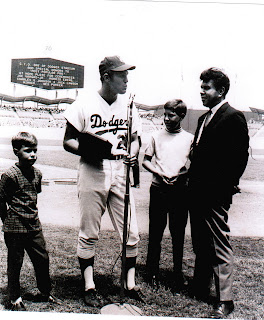 A few years later, my dad and brothers John and Chris presented the award to Wes Parker.  Check out the marquee in the background...my pop’s name is quite visible.  I’ve also attached a gorgeous photo of my dad with Walter O’Malley...my pop cut a rather dashing figure, if I do say so myself.” 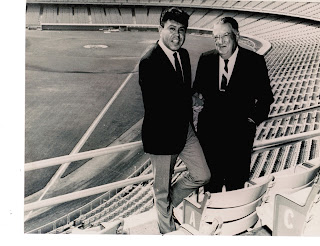