An Outrageous Proposal, But Something to Think About 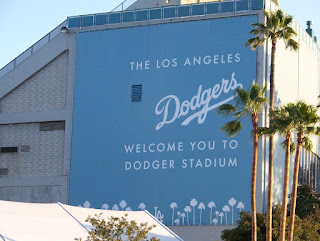 About a month ago, Howard Cole over at the Dodger Blog at the O.C. Register wrote about the pending Astros move to the A.L. West and then he proposed that the Rockies would be a better fit in that division.   Now as the owners meetings start to get tuned up in Milwaukee, there is talk of that Houston move again and how some A.L. West clubs, (i.e. the Anaheim Angels and Oakland A’s), are not too happy with a second Texas team in the division.
Now let me throw something sacrilegious out there.  I don’t propose this, and I don’t ever see this happening, so please refrain from showing up at my doorstep with lit torches and pitchforks in hand.  But what if the Dodgers moved to the American League West?  I know it is blasphemy to even mention it, but just give it some thought for a minute.  If you as a Dodger fan knew that the Dodgers would win a World Series within the next three years if they moved to the American League, would you change your tune and support such a move?  I sure would.
What would result from the Dodger franchise moving to the Junior Circuit?  Would the end result be a positive one?  Is tradition so deep in baseball history that the move simply couldn’t be made?  Let me throw this out there.  The Dodgers and Giants moving west was about as drastic a change as possible to the game, and in the end, it was a positive step to advance the sport as a whole.
Also, a league switch-er-roo isn’t unprecedented, as Milwaukee did so in 1998.  Granted, I’m aware that the Brewers don’t carry the tradition and prestige that the Dodgers do, but still, their league switch didn’t ruin the game.   Major League Baseball has made such drastic changes as realigning and setting up divisions, producing the League Championship Series’ and then the League Divison Series'.  Changing post season matchups to night time and advancing the game monetarily in the process.  Also Allowing Free Agency, creating the arbitration process, introducing the D.H.
What I’m trying to say is that MLB, as much as it is stooped in tradition and what appears to be a reluctance to change, has been quite innovative and made drastic alterations over the past 40 years.  A move of the Dodgers to the American League would not be a change that would destroy the game.  In fact, there are those that would probably be for it and would say it’s a positive step.   Here are some of the pros and cons of such a crazy move that I came up with:
Pros:
Cons:
Okay, a crazy idea.  I know that, but what a story it would be if the league considered moving our franchise to the other league.
Posted by Evan Bladh at 11:27:00 PM