Will They Just PLEEEEEEESE Go Away?

The off day is dominated by Dodger divorce news, something that we are all sick of.  And just when you think that it’s not possible to dislike both Frank and Jamie McCourt any more, they come through with more shenanigans that prove you wrong again.  The events that unfurl as time goes on in this case just make you shake your head. 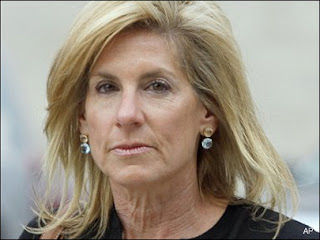 I have no sympathy for either one.  Having experienced a divorce many years ago and being a person that recognizes that divorce brings out the worst in people, the McCourts have taken that “worst” to a new level.  I understand the emotions that come into play but come on.  How much of this do they want to continue to air in public?  They are embarrassing themselves and they are embarrassing the Dodgers.  Loyal Dodger fans don’t deserve this.
As far as I’m concerned, owning seven houses is five houses too many for a couple that is divorcing.  The bulk of Jamie McCourts support payments are used to pay the mortgages on these properties ($400K of the $600K she receives).  Time to liquidate Jamie.  And if $200K/month isn’t enough to live on, then she has some serious issues. Frank isn’t far behind, frivolously paying $40 grand a month to live in a hotel is asinine when you are declaring bankruptcy.  There are apartments, and luxury ones at that, to be rented for a tenth of that price.  Heck for what he has paid for his hotel the past  8 months, he could have bought a comfy residence to live in.  (Probably not comfortable enough for his taste, but 99.9% of the population would be fine with it).
The fact that Jamie McCourt is attempting to line up investors to purchase the team is proof that these people don’t understand that fans are largely staying away because of them.    Yes, the team performance has something to do with it, but there is no way either one of these two can save face and recover what they had.  Their reputation is tarnished to the point of no return.  They are probably the most despised people in Los Angeles.  They can’t possibly think that they will ever be able to remain in L.A.  If they do, they are completely blind to reality.


And think about this, with her history, does Jamie McCourt seriously think that she would receive approval from the other MLB owners  if she were to put an investment group together to buy the team?  Additionally, what investor would seriously want to align themselves with her?
Back to baseball:
Orel Hershiser on Colin Cowherd’s ESPN radio show this morning:
Cowherd:  Is there an arm out there on a bad team that if you are, say the Yankees, you really want?
Hershiser:  I like Kuroda.  I’ve always kind of liked Kuroda.  I’ve always thought that his stuff really could play up in a big game.  Like you say, you’re either gonna win or lose big games and that’s the kind of guy that can really play up in a big game.  His split, the way he goes about his business.  I don’t think pressure really gets him.  I think it has been mainly health.  When he’s healthy, I think he can really perform at a high level.
Cowherd:  You know I was in L.A. about two or three years ago for opening day and I think he was the starter.  And it was funny, my buddy Tim in L.A., is a huge Dodger fan, and he said “I just keep waiting for this guy to win 18 games.”  Well for Joe Torre, to name him as the (opening day) starter a couple of years ago, he has to have something.
Hershiser:  The thing I think he doesn’t do so well is that he doesn’t change eye levels.  He’s so dominant when he gets locked in, both with his fastball and his split.  He can really command the strike zone, but every once in a while he’s got to be affectively wild.  He’s so precise when he’s on, and he gets locked in.  And I think that the hitters just kind of know, that this is the area, even though he’s dominant stuff.  They know that this is the area he’s going to be.  If he could be a little more intimidating at times.  That might put him over the top in those kind of games.