One of the Craziest 4-Games Stretches in Dodger History

The last time a Dodger pitching staff was able to spin three consecutive shutouts was when Darryl Strawberry was their marquee slugger, the outfield walls were their original non-padded powder blue and the Atlanta Braves still had not won a pennant in over a 33 year span.  It was 20 years ago this summer, July 25-27, 1991.
The funny thing about those games is that they are mainly forgotten because the following day, July 28th, Dennis Martinez of the Expos pitched a perfect game against the Dodgers at Dodger Stadium.  Those four consecutive games were some of the strangest and remarkable games ever recorded at Chavez Ravine.  The Expos starter on the July 26th game, Mark Gardner, pitched 9 innings of no-hit ball, only to lose the game 1-0 in the bottom of the 10th inning.   So the Dodgers were essentially no-hit in 2 of the 4 matches and came away the victors in three games.  Heck, they could have won the perfect game had they not given up two unearned runs that day.  Here is how things went. 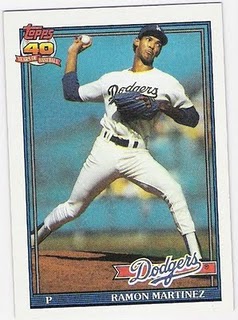 Thursday, July 25, 1991
The Dodger faced the Phillies in the last of a three game sweep.  Ramon Martinez went the distance before 39,626 fans to a 5-hit the Phils 5 to nothing.  Martinez faced a Phillie lineup made up of such hitters as Len Dykstra, Dale Murphy, John Kruk, Darren Daulton and Dickie Thon.  It was a scoreless duel until the bottom of the 8th when the Dodgers mounted a 5 run rally behind RBI hits from Kal Daniels, pinch hitter Mike Sciosica and Lenny Harris.  Interestingly, Gary Carter was the catcher that called this game. 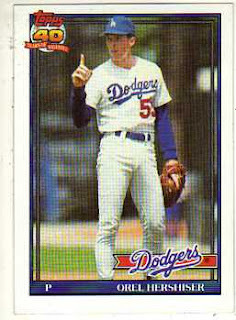 Friday, July 26, 1991
This was one of the most remarkable games ever played at Dodger Stadium, and one that Montreal starter Mark Gardner will never forget.  Gardner pitched a gem.  He no-hit the Dodgers for nine innings but received no run support against a trio of Dodger pitchers.  Hershiser pitched 6 innings of 1-hit shutout ball, followed by Kevin Gross who allowed only 1-hit and no runs in three ininngs of work.  In the 10th inning, Jay Howell retired the side in order.  With the score 0-0 in the bottom of the 10th, Gardner gave up his first hit, a weak ground ball that Lenny Harris  legged out to shortstop.  That was followed by a sharp single between second and first by Eddie Murray that advanced Harris to third base.  Montreal manager, Tim Runnels, pulled Gardner from the game after 114 pitches and brought in hard throwing Jeff Fassero to face Darryl Strawberry. On Fassero’s third delivery to the plate, Strawberry laced a single to left, lifting the Dodgers to the 1-0 victory.
Just like the 1-0 Dodger victory against San Diego on Saturday night, the Dodgers were no-hit in this game until their final batters had consecutive hits.  Also, like Saturday’s game, they eventually ended up out-hitting their opponents with the game winning hit each day (Dodgers outhitting San Diego 2-1 on Friday and 3-2 in the 1991 game).
Saturday, July 27, 1991
Dodger lefty Bobby Ojeda 5 hits the Expos in a 7-0 Dodger win.  It was probably Ojeda’s best pitched game as a Dodger.  It should be noted that the Montreal team he faced was made up of some real fine hitters at the time, (Deshields, Grissom, Galarraga, Walker to name a few).  The Dodger offense was sparked by consecutive homers hit by Strawberry and Daniels. 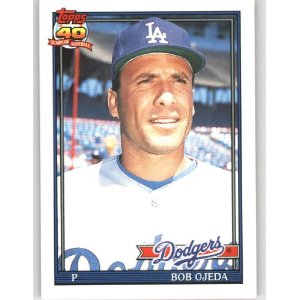 So, on the following day, Sunday, July 28, 1991, Dennis Martinez pitched his perfect game.  What few people remember about this game is that it could have easily been another 0-0 game after nine innings, but Alfredo Griffin committed two errors in the top of the 7th innings to allow Montreal to score two unearned runs against hard luck Dodger starter Mike Morgan. 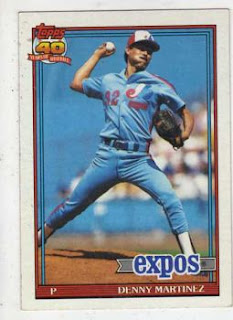 Additionally, this was one of the few no-hitters that I recall where there was no serious challenge to breaking up the masterpiece.   The Dodgers didn’t have anything remotely close to a hit.  “El Presidente” hurled an amazing game, striking out only 5, but inducing 17 ground outs and 5 weak fly balls.
That ’91 Dodger team ended the season with a fine 93-69 record, only to fall one game short to the first of many N.L. Pennant winning Atlanta Braves teams.  The Braves surged to win 8 of their final 9 games to overtake the Dodgers and win the division while Los Angeles was eliminated from contention in hated San Francisco on the final weekend of the season.
Posted by Evan Bladh at 5:14:00 PM