So I was one of the privileged 16 bloggers that happened to be present at last night’s bloggers night at Dodger Stadium.  Since I had to take the day off and drive down from San Francisco, I must say that I’m beat.  I left at 10:30 AM Tuesday morning and arrived back home at 4:00 AM the next morning after logging about 800 miles on the odometer of my vehicle.  It was a trip well worth it. 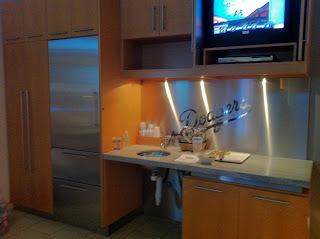 It was quite an experience to be surrounded by people that have been doing this a lot longer than me, some with some incredible insight into the Dodgers from the Minor League trenches to the top levels of Dodger administration.  I was impressed by the participants and Josh Rawith, Dodgers V.P., Communications, and his staff made up of Amy Summers, Yvonne Carrasco, Adam Chodzko.  They were amazing hosts and set up visits with a who’s who from Dodger history and social media experts.
We were treated with a visit from Ben Platt, MLB correspondent and the original creator of the Dodger website back in the 90‘s.  We had spoken via message board postings over the years but had never met face to face.  He didn’t know who I was, but it was nice to meet the mind behind the Dodger website, message boards and social networking back in it’s infant stages.
Mark Langill, the Dodger historian was present.  We had a conversation about the Dodger teams of the 70’s and specifically the antics of fans and personalities of those that were in the Left Field Pavilion.  Mark told an interesting story of how an extremely elderly woman showed up at Bud “Steamer” Furillo’s funeral 7 or 8 years ago.  It turned out to be centenarian Francis Friedman from the LF Pavilion days.  Bud’s family was extremely touched that she showed up.  I had no idea that Francis lived such a long life.  Wow, she was a personality and fantastic Dodger fan.  Is is possible she is still with us today?
Dylan Hernandez of the Los Angeles Times made an appearance and spoke with a number of bloggers, though I didn’t really get a chance to converse with him at length.  He wrote about is visit in today’s column and specifically Roberto Baly and his efforts to get Ethier voted on to the all-star team.  LINKED HERE
Al “Bull” Ferrara came in and told some stories.  The man can talk a mile a minute and he reminded us of his acting career in Batman and Barretta episodes.  The Bull is probably the only Dodger to play the piano at Carnegie Hall too.
Josh Rawitch arranged for  Andre Ethier to call in to our suite from the clubhouse.  He  answered a few questions.  When Andre was asked “what makes (his) candidacy far better than the other NL candidates?  His answer was simple and to the point.  “I’m a Dodger,” he said.  “It’s as simple as that right there.”


Ethier further stated how grateful he was to those voting for him and added, “I’d like the opportunity to represent these fans...they’ve been through a lot with all the distractions.  So hopefully they and we can focus on the 'on-field' stuff again.”
Dodger legend and favorite third baseman Ron Cey stopped by for a visit.  Ron is candid and pulls no punches when asked his opinion on things.  Not much has changed from his playing days.  When asked about Dodger rookies and specifically De La Rosa he didn’t hold back saying, "He looks real good until what? The 7th inning.  I mean, you’ve got to close those things out.  When you’re in a position like that, It’s not an easy thing to fall back on, saying he’s a rookie or whatever.  These things you’ve got to close out."


Ron Cey Speaks Out on the Garvey Group
Ron Cey answered questions and gave some rather candid opinions on some folks that have come forward and expressed interest in buying the franchise.  Without specifying who he was speaking of, it was rather obvious he was referencing Steve Garvey and his active public stance where he has let it be known that his investment group is interested in buying the Dodgers.  Here is a word for word excerpt from yesterday’s meeting:
Blogger:  Do you think someone like Mark Cuban could ever own a baseball team?
Cey:  I could say that probably there are a lot of people on the side that could.  They’re laying low.  The club has not been put up for sale.  The Commissioner has not asked for a vote to oust the current ownership.
Blogger: What about your colleagues, some of your former colleagues who are going public right now?

Cey: It is completely unethical.  Unprofessional, you read the article, blog, I’m sure.     What else needs to be said?  He’s out of line.  It’s as simple as that.  Do the right thing.  You want to have an investment group?  You want to be ethically under control?  Then resign your position here and go and do what you’ve got to do.  In between time, here comes some real bad karma.
Wrapping things up
The game was another tough loss, something that is becoming more common as the days go by.  A few suites over, 8 fans that won a twitter response contest were set up in a suite with laptops to vote over and over again for Ethier.  It was a good, fun promotion.  Hopefully Andre prevails and gets to play in the all-star game in his home town.
Gene Simmons of KISS threw a strike with the ceremonial first pitch.  I saw no sign of him in any of the suites that I had a view of.
I'm beat and got to be in to work in a couple of hours.  It has been a crazy 36 hours. 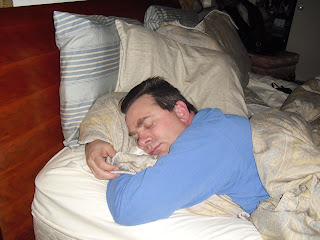