The Trek to Camelback and an Interview with Sweet Lou

It all started Saturday night at 11:30 pm.  I had a work assignment that sent me to Oakland Airport and I finished the assignment at 3:00 am.  Knowing that I had to depart the Bay Area that morning for the Glendale, Arizona road trip, (a week’s vacation at Camelback Ranch), I had decided to leave directly from work rather than return back home for only a few hours sleep.  I opted to depart early and see how far I could drive before I’d have to stop and sleep for a little while.
My dear wife had prepared me for my long drive by setting my car up with a pillow and blanket.  So off I went, Steely Dan CDs blasting as I set off for Interstate 5.  Within an hour and a half, I was fighting the sleep and soon realized that I’d have to stop at the first rest area for 40 winks.  At 5:00 AM I arrived at an interstate 5 rest area north of Coalinga to sleep. I set my cell phone alarm to wake me at 7:00 am so that I could continue my southward trek.
By the time I hit the grapevine upgrade, the weather was downright filthy.  Wind had literally overturned two cars that the Highway Patrol was attending to.  When I arrived at the Tejon Pass, I needed to gas up.  My GPS indicated that the outside temperature was 32 degrees.  When I stepped outside at the Shell station, the snowflakes were falling at a furious pace on a sideways angle.  “I’ve gotta get out of here before the Chipies close down I-5,” I thought.  And I cut short my work at the gas pump after fueling only 4 gallons and started up the grade again.  By the time I reached Pyramid Lake, the snow had stopped falling and was replaced by the pouring steady rain which took out one of my windshield wiper blades.
I arrived at my brothers Chino home at 11:00 am and was able to nap for an hour or two while I waited for him to return from church.  By 3:00 pm, he joined me as we drove on to Phoenix.  On the way there we conversed about the days ahead.  Dodger tales from the past.  A lot about our Left Field Pavilion adventures as kids.  By the time we had checked in to our Phoenix hotel and got a bite to eat it was around 10 pm and I was exhausted from the long drive and only 2 hours sleep, ( in my car), from the early morning hours. 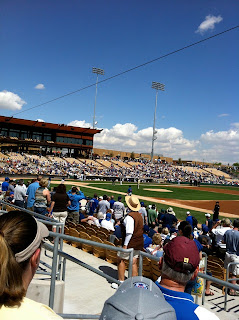 We got up early for breakfast and went to Camelback Ranch (CR) for when the gates opened.  It was a cold morning and the weather prediction was an 80% chance of ran.  It looked like the skies were going to open up.  After walking the grounds and getting familiar with the layout of the facility, we decided to go to the Minor League Fields and watch the activities.  That turned out to be a good decision. 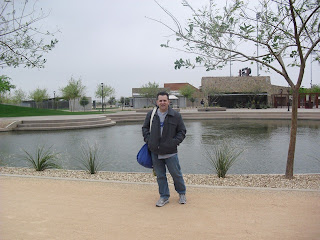 There were the youngsters playing in two intrasquad games.  And we immeidately recognized former Dodgers some on coaching staffs, others just helping out: Ramon Martinez, Jody Reed, Matt Herges, Steve Yeager, Charlie Hough, Sweet Lou Johnson, Lenny Harris.
We mainly just watched, but during breaks in the action we were able to converse with Yeager and Johnson.
First there was Steve Yeager.
Steve was freezing to death out there.  The expletives were flowing from his mouth over the weather.  He was extremely gracious with my brother who approached him and  spoke with him a few minutes.  He signed his ball and even inscribed “81 W.S. co-MVP” on it.  He mentioned that he missed Vero and said that he’ll be back there for fantasy camp this coming winter.
Just then a kid at third base dropped a win blown pop up, “For the love of (expletive),” said Steve.  He was gracious, and he posed for the photo shown in yesterday's post.  i told him I was disappointed that I didn’t bring the LP he recorded with Reuss, Johnstone and Monday  so he could sign it and he said, “We really butchered the hell out of those two songs didn’t we?”
An Unforgettable 25 minute conversation with Sweet Lou
I saw Sweet Lou Johnson and struck up a conversation with him.  I was absolutely amazed at his graciousness.  He actually thanked me for taking the time to approach him.  We posed for pictures man, I’m telling you, Sweet Lou started talking and talking and talking.  He wouldn’t stop.  I was trying to keep good notes and keep up with all the topics he addressed so that I could mention them, some of them were:

By this point, I was firing off the questions and had my camera rolling so I wouldn’t miss anything:
Q: So what can you tell me about the incident in Candlestick Park when Marichal clubbed John Roseboro with the bat.  I saw footage of that brawl and you were (he interrupts)
Johnson:  “I was gonna kill somebody.  I lost it.  I was so angry.  You see, they was using bats.  You just don’t start swinging bats man.
Q: You mean Tito Fuentes?
Johnson: “That’s right.  Fuentes had a bat and he was swinging it at people.  And I was gonna get him.  What people don’t understand man is that Rosie, John he was my closest friend on the team.  We lived two blocks from each other.  We drove to games together.  We socialized together.  When I saw his face, and the blood.  Well, I just lost it.
Q: And how did they calm you down?
Johnson:  "Well it wasn’t they, it was him.  Somebody lifted me off the ground.  Someone, a big man.  I don’t know where he came from, but McCovey lifted me up off the ground and said I needed to calm down, and (laughs) I wasn’t gonna argue with McCovey.  That is a big man.
But I knew I was gonna get Fuentes.  The man played second base and the next time I had a chance to come in hard to break up a double play, hell man, I ended up in left field I slid so hard.  But I missed him, ‘cuz he knew what was coming.  Even today when he sees me he says, ‘you were trying to kill me,” and I tell him, ‘I still haven’t got you yet,’"  (he breaks out in laughter again)
At that point someone from the dugout calls out to Lou, he excuses himself and thanks me for talking to him.  Imagine that.  He thanked me for the conversation.
Posted by Evan Bladh at 9:41:00 PM