Jerry Reuss - One of My Favorite Dodgers

There is this great black and white photograph that I would love to post here, but it is a licensed photo by Jerry himself and can be found on his flicker account.  I recommend everyone view it.  His confident 6 ft. 5 inch frame is posed to throw to pitch in the final inning of his no-hitter against the Giants.  In the background is the imposing scoreboard showing his no-hit accomplishment.  You see the old outfield screen/wall at Candlestick and additionally in the shot is a poised shortstop Bill Russell, who is probably thinking in his mind that his error has cost Reuss a perfect game.
http://www.flickr.com/photos/43289453@N03/4015150144/
Jerry was a great Dodger and a clutch starter.  I recently bought a signed bat that he signed from an Ebay auction that he inscribed with the date of his no-hitter against the Giants in Candlestick on June 27, 1980.  I also have a cassette tape in a box stored away of Jerry Doggett’s play-by-play of the ninth inning of that no-hitter. I popped it in a tape recorder and pressed “record” when it looked like history was going to be made.  To give you some perspective of the era, it’s on the same tape of a live Doobie Brothers concert that I taped from KLOS the previous New Year’s Eve. I found it a few years ago in a box with old cassette tapes.  I believe that I kept the L.A. Times Sports section from the following day, but I need to dig through some boxes in storage to find it. 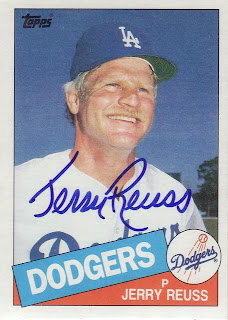 That June 27, 1980 game was a great day in Dodger history.  What remained of the 20,285 Giant fans were actually cheering on a Dodger in the ninth inning.  The game that lasted 2 hours and 13 minutes, in a 8-0 Dodger win, was narrowly close to a perfect game.  The only blemish was a throwing error by Bill Russell with two outs in the bottom of the first inning.  Reuss retired the remaining 25 batters in order.
Some other highlights from the game: Garvey and Dusty Baker homered.  Davey Lopes, Rudy Law and Bill Russell all went 3 for 5 as the Dodgers had 17 hits.
Reuss only had two strikeouts but his sinking fastball induced 17 groundouts.  Jerry threw almost all fastballs the entire game, mixing in an occasional curve and change up.  Spending a good portion of 1980 Spring Training in the company of Sandy Koufax, Reuss took to heart the philosophy that control and movement were more important that speed.  His sinking fastball became his most effective pitch.
Following the no-hitter, some reporters were praising Steve Yeager’s game calling abilities to which Jerry jokingly responded, “It doesn’t take a Rhodes scholar to hold one finger down all night.”
Don’t Always Trust your Internet Sources
So I  was reading about this fantastic game that I happened to watch on television.  There was a website that discusses Reuss’ career and the 1980 no-hitter, the following citation is made:  “Jerry Reuss won 18 games and had a 2.51 ERA in 1980, despite allowing nine grand slams!  The nine slams allowed were a National League record, and Reuss allowed just three additional homers that season.”
(Link:    www.thebaseballpage.com/players/reussje01.php   )
I had a hard time believing that statistical fact.  I was almost certain I would have remembered Reuss giving up 9 grand slams home runs in a season with the Dodgers.  And in 1980?  His best year on the mound? He was 18-6 with a 2.51 ERA. He made the all-star team.  He finished second to 24 game winner Steve Carlton in the Cy Young voting. He led the league in shutouts with six. I couldn’t fathom him setting such a dubious record in that amazing season.
So I went through every Dodger box score on baseball-reference.com for the 1980 season.  And Reuss gave up a total of 12 home runs and only one grand slam, (to Johnny Bench on September 19th).  So that comment is completely inaccurate and I don’t know where it comes from.
Jerry started the year in the bullpen as Lasorda went with a rotation of Sutton, Hooton, Welch, Sutcliffe and Goltz.  The fact that Reuss only started 29 games probably cost him a shot at his only 20 game winning season.  Had he been in the rotation from the beginning, it is likely that the Dodgers would have won the division outright.
The Prankster
There is the classic story of how Lasorda entered his office one day and found that to his horror, every signed celebrity photo had been removed from his wall and replaced with three framed autographed photos of Jay Johnstone, Don Stanhouse and Jerry Reuss.
Then there was the groundskeeping incident.  When Reuss and Jay Johnstone put on grounds crew uniforms and raked the field between innings, only to be fined by Lasorda.  A fine that KABC Dodgertalk host Bud Furillo was able to pay off through listener’s donations.  With a lot of time to kill between starts, other Reuss exploits included:
But the classic prank Reuss pulled was on Lou Piniella, then Manager of the New York Yankees.   The Dodgers happened to be playing at Wrigley for a day game.  That night, the Yankees were playing the White Sox at Comiskey.  Reuss showed up at the Yankee locker room, dropped an equipment bag on the floor and introduced himself to Piniella.
“It’s a pleasure to meet you, Mr. Piniella.  I’ll start or work relief, whatever you want.”
Piniella stood dumbfounded not knowing what to say as Reuss continued, “Didn’t they tell you?  You got me in a deal.”  To which Lou responded, “What deal?”  Reuss didn’t let up. “Didn’t George tell you?  We better close the door and talk.” 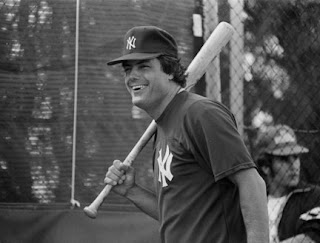 (I checked the veracity of this story and verified schedules from 1986.  It turns out that the Dodgers and Yankees were both in Chicago on May 6th and 7th of that year)
For a good laugh, here's Jerry Reuss, Jay Johnstone, Rick Monday and Steve Yeager performing "We are the Champions" on the SOLID GOLD TV show, 1981 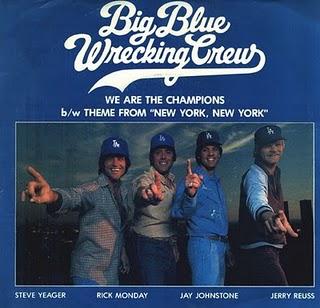 A Solid Dodger, 1979-86
Reuss had the lowest ERA of any National League starter between 1980-85.  Always giving a consistent quality start, Jerry was able to pitch incredibly efficient in those years.  As a youngster with St. Louis, Houston and Pittsburgh, Reuss had a tendency to overthrow and be wild.  As a Dodger, he took a few ticks off the fastball and became a more efficient pitcher, concentrating on control and placement over blowing away hitters.
Jerry won two crucial games in 1981.  First the concluding game in the 5 game Houston Series, a 4-0 shutout that he tossed.  Second was winning game five of the World Series against the Yankees, 2-1, the final game at Dodger Stadium that year.  He was the hard luck loser to Steve Carlton in game one of the '83 NLCS against Philadelphia, losing 1-0.
Starting 201 games for the Dodgers in his 8 years with the club, I think it's fair to say that Reuss' best years were in a Dodger uniform.  Jerry is one of few players to have played in the Major Leagues in parts of four decades (1969-1990).
*one additional note.  Jerry is an excellent photographer and his baseball related photos are posted on his flicker account under the name:  Everything_Jerry_Reuss
He also has an interesting website at www.jerryreuss.com


As awful as the current Dodgers have looked this Spring Training, I am starting to get enthused over the performance thus far of Tony Gwynn Jr.  If he can hit, he can be a valuable addition to the club.  They certainly could use his defense in the outfield.