So there is recent news out that Matt Kemp will be given the green light to move on the base paths, until Lopes decides that he isn’t using good judgement.  I hope that Lopes doesn’t have to intercede, but the history of young Matt’s career has shown that his baseball sense has not quite developed and mental errors on the base paths have followed him throughout his first 3 years in the league.  However, there is no greater teacher to learn base path knowledge from than Lopes. 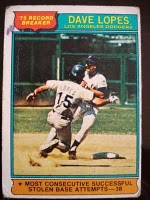 Davey ranks as one of the greatest base stealers in history with a success rate of 83.01% rating. Of base stealers with over 400 SBs, only Willie Wilson and Tim Raines rank higher.  In 1975, Lopes broke the major league record for consecutive steals without being caught at 38, (Vince Coleman later broke that record in 1989).  Success on the base paths was Lopes’ claim to fame. 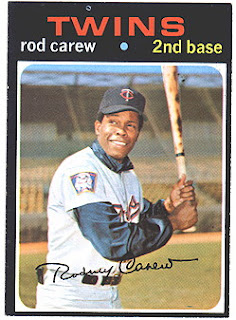 There is one unbreakable record out there related to base stealing that I just shake my head in disbelief at. It ‘ll never be touched.  It is Rod Carew’s 1969 season in which he had 7 straight steals of home.   This is an obscure record that nobody seems to know about.  In today’s game, there are perhaps 1 or 2 successful straight steals per year.  Imagine one player pulling off stealing home 7 times in a season.
Ty Cobb holds the record of stealing home base in a season with nine in 1912, but 7 of those were delayed double steals where a runner broke to second and Cobb took off when the catcher threw to second.  Only two of the 9 were straight steals of home.  Dodger Pete Reiser stole home 7 times in 1946, but not all were straight steals.
Rod Carew’s accomplishment in the modern era is quite astonishing.  He never stole home on a double steal attempt.  Carew did his thievery on the pitchers.  That same feat will never be accomplished again, because unlike 40 years ago, pitchers of today, pitch out of the stretch when a runner is on third base.
How difficult is it to steal home?  Well let’s look at the all-time great base stealers.  Rickey Henderson who has 1,406 total SBs only stole home once.  Maury Wills ( 586 all-time) only did it once too.  “It’s not a high percentage play,” said Wills. (Antonen, Mel, “Stealing home: Adding a rare dash of rousing excitement,” USA Today, 28 April, 2009)   Lou Brock with 938 lifetime steals never stole home.  Neither did Willie Wilson (668 all-time), Vince Coleman (752) and Tim Raines (808).
How did Carew do this?  What was it that happened in 1969 that changed his game plan?  It was a similar situation that Matt Kemp now has with Lopes.  Carew had a wise and inspired manager that made him work on it:  Billy Martin.

During Spring Training in ’69, Martin, who as a player had stolen home a few times, approached Carew and told him that with his speed and savvy, he may want to look into studying pitchers and timing their windups to the plate.  Martin felt that Carew could beat pitches to the plate.  Rod addressed the topic in his autobiography, Carew:
“Billy worked with me for hours on stealing home. He suggested I take a slow, walking lead, instead of the lead in which you come to a stop. How far I should lead depended on how far the third baseman was playing off the bag, and whether the pitcher took a stretch or a windup. That walking lead was essential: you’d have momentum already started toward home.
We had it timed to the split second. If a pitcher wound up–instead of pitching from a stretch–and took six beats from the time he began his windup to his release, we determined that I ought to make it home safely. We also had the batters practice getting in the catcher’s way, without being called for interference.”
(Carew, Rod and Berkow, Ira, Carew, Fesler-Lampert, Minnesota Heritage)

It took team-like precision and coordination to pull off the steal of home with Carew.  First off, he needed to have the confidence that a hitter like Killebrew knew the play was on, or he risked being decapitated by a Killer line drive.  Wills referred to the fear factor involved with stealing home, saying that you had to have confidence that your teammate got the signal and still the courage to continue in full speed, with the possibility of the batter having missed the sign and swinging away, “With Frank Howard standing in the box, my head could have been belted down the left field line.”
(Antonen, Mel, 2009)

Another issue that went against Carew was that as the season wore on, he was watched much more closely.  His last steal of home was in July, meaning that he didn’t get much opportunity to break Cobb's record of nine steals of home, due to the diligence of pitchers holding him on and pitching from the stretch towards the end of the season.
(Vass, George, “Stealing home: a lost art in Major League Baseball,” Baseball Digest, September, 2004)

Lou Piniella opines that in today’s game, nobody could pull off breaking this record for that very reason: “If somebody steals home now, he'll be on ESPN for a week and every team will be watching him like a hawk."
There is a reason that in today's game, pitchers go to the stretch when a man is on third.  Jim Kaat explains it:  “Pitchers used their windup more with a man on third because the thinking at the time was you could throw harder from a windup,  when the radar gun came along, we found out that wasn’t true.”
(Antonen, Mel, 2009)
In today’s game, the best opportunity to steal home is under much different circumstances than what Carew and the ’69 Twins used.  They would attempt to steal home with a right handed hitter at the plate and would use the hitter to partially obstruct the catcher’s vision and path to the plate.  Today, the best chance to steal home would be with a power hitting lefty at the plate.
It would be when the shift is on and there is no third baseman near the third base bag, allowing the runner on third to get a gigantic lead.  This was how Jacoby Ellsbury stole home in Boston in 2009, with J.D. Drew at the plate and a partial shift on.  Ellsbury caught Andy Pettite and the Yankees napping.


We all know of Jackie Robinson's famous steal of home in the '55 World Series.  It has been replayed again and again.  Jackie stole home 15 times in his career and completed the feat at least once in every season he played except for 1953.  The surprise play was a much more common occurrence during that era of baseball.  An interesting fact that is often missed is that the Dodgers, on the losing end of an attempted steal attempt, probably lost the '51 pennant because of it.


In a late season game against Boston, (Sept. 27th), Brave outfielder Bob Addis was called safe in a bang-bang attempt to steal home.  What resulted was Campanella going bananas.   He was ejected and suspended for the final three games of the season.  This was Campanella's MVP season.  Missing those four games possibly cost the Dodgers the pennant because there would have been no playoff with the Giants had the Dodgers won an additional game.


Another interesting fact about that Sept. 27 game.  An obscure Dodger outfielder with the big club for a September call up was ejected from the game too, (along with the entire Brooklyn bench).  That player is known in baseball history as the only player to have been ejected from a game and never to have ever entered a game as a player.  He was none other than NBA Hall of Famer, Bill Sharman.