Are the Dodgers Snake-bit in Arizona?

Can the Dodgers ever get through a Spring Training without the injury bug biting them hard?  I wonder.  This is one snake bit team in Spring Training.  What seemed to be the clubs biggest strength going in to this season has now been reduced to 4 starters.
Before they had even played one game, Vicente Padilla’s nerve issue in the elbow caused him to go under the knife and on the DL until at least May.  Now with Garland’s oblique issue, I’ve been following the game long enough to know that that type of injury must heal completely or it can re-occur and linger for the whole season.
But I repeat, it just seems that this team is cursed when it comes to Spring Training injuries.  Let’s take a look back just the last few years and see how accurate that statement is:
2005-The first game of Spring Training, in his second at bat, Jayson Werth is hit by Marlin A.J. Burnett's fastball and his wrist is broken.  He never recovered in a Dodger uniform and the Dodgers lost a player that could have lifted them to new heights for years to come.
In that same spring, Eric Gagne trips and sprains an ankle, then injures himself further by making adjustments to his delivery to compensate for the injury.  He eventually injures his elbow and is never the same pitcher again.
Two big impact players.  Both lost for good.  The Dodgers finish the season 71-91.
2006-Gagne again suffers an injury, this time his back.  He barely plays, has surgery.  His days as a Dodger end.
2007-Hong Chih Kuo injures himself battling for the 5th starter spot and starts the year on the D.L.  He never returns to the starters role again.


Starter Jason Schmidt pitched through pain in Spring Training and by May was shut down for the year with what turned out to be a career ending torn rotator cuff injury.  His loss of velocity was a constant concern during Spring Training.  Though Schmidt never admitted to being injured during the spring, it was later determined that he was hurt and should have been shut down then. 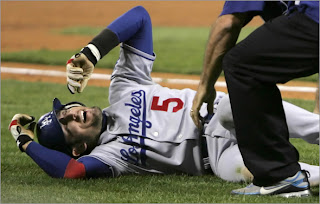 2008- In the course of a two inning span, the Dodgers lost both of their third basemen. 1st, Nomar Garciaparra broke his wrist when a pitch from Cardinal Kyle McClellan hits him.  An inning later, Garciaparra’s third base replacement, Andy La Roche, tears the ulnar collateral ligament in his throwing hand on a freak deflection on a pick-off play at third.  Andy’s Dodger career is never the same.  It is the beginning of the end for Nomar as well.


2009- Ivan De Jesus Jr., a prospect that had an OBP of over .400 at AA Jacksonville suffers a broken leg in an intrasquad game collision at home plate.  The injury shuts him down for almost two years and to this day has hampered his development.  He isn’t the same player that he was pre-injury.
2010-Russell Martin pulls is groin muscle and misses 90% of camp.  He most likely comes back too soon (based on his 2010 performance). 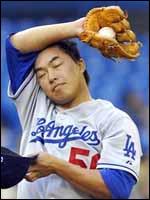 Hong Chih-Kou experiences elbow pain and is shut down, not participating in the Dodger’s Taiwan road trip.  He  starts the year on the DL and comes back a week or two into the season.
2011-Vicente Padilla undergoes surgery on his elbow to correct an impinged nerve problem.
Minor League invitee Dana Eveland also injures a hamstring on the second day of Spring Training.
John Garland suffers an oblique injury, severity unknown.
Who’s next?
Posted by Evan Bladh at 7:49:00 PM