It was a dump and we were happy it was “their dump.”  Who would have figured that San Francisco, which is arguably the most beautiful city in the nation, could botch the location of their baseball field so badly that it would be viewed as the worst baseball playing venue in the league. 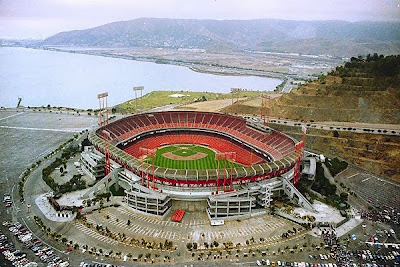 But that was a fact for decades.  Candlestick Park was awful.  Candlestick Point might be the ugliest section of the city.  It's sweeping winds off the hillside are chilling.  The neighborhood is a bit seedy, especially compared to some picturesque areas of the city.  This was absolutely the wrong place to build the Giant's home field.

This place was freezing cold, even on sunny days.  I can recall sitting in the bright sun for a portion of a game, frying and sunburnt for 3-4 innings, only to see the shade hit our area and then temperature dropping literally 20 degrees.  There were micro-climates within the stadium, just as there are in different areas of the San Francisco peninsula.  You’d dress in layers and go from parka to sweater to windbreaker to t-shirt to windbreaker to sweater to parka all in the matter of 6 or 7 innings.

I know people here that never knew what it was like to experience a major league baseball game in sunny weather wearing short sleeved shirts.  They’d come dressed like eskimos to baseball games in July.  That was the norm for San Franciscans.

Here we are a full 14 years since the last major league baseball game was played there, and now they will finally tear that abomination near the bay down after the 49ers play their last game there in December.  This all got me to thinking of the great Dodger moments in that ballpark.  There were some heartbreaking moments, but there were also good ones.  This one mentioned below was a favorite:

Little did anyone know that Reuss was about to make history, especially Dodger shortstop Bill Russell who threw wildly to first base for an error in the first inning after cleanly fielding a Jack Clark grounder.  Clark was the only Giant to reach base all night.

Dodger hitters sprayed 17 hits all over the yard that night, scoring eight runs in a route from the get go.  Steve Garvey and Dusty Baker homered, Davey Lopes stole a bag, Ron Cey was his normal dominant self against San Francisco collecting two hits.  This was a good old-fashioned shellacking.

Meanwhile, the Giants couldn’t touch Reuss and he wasn’t blowing away hitters either, striking out only two batters all evening.  But that fastball of his had a natural sink and Giant hitters grounded out 17 times that night.  he mixed in an occasional curve, but it was that tailing heater that was working.  When reporters raved about Steve Yeager and his game calling, Reuss joked “It doesn’t take a Rhodes Scholar to hold one finger down all night.”

Reuss faced one hitter over the minimum, and didn’t allow a walk.  The lone blemish was the Russell throw in the first.  “It was one of the most overpowering games I’ve ever seen anyone pitch,” said former Dodger and Giant hitting coach Jim Lefebvre.  “He was literally breaking bats in our hands.”

Bill North was the last out as he hit a nubber back to the box.  “It was obviously the greatest thrill of my baseball life,” said Reuss.  “I began to think about it from the very first inning.  Something in my head said maybe tonight was the night..”

It was quite surreal to watch what was left of 20,000 plus fans in Candlestick actually cheering on the Dodger starter to get the no-hitter and witness a moment in history.  Probably the first and only time that ever happened at Candlestick, where fans took pride in attacking Dodgers both verbally and physically over the years.

I drive by Candlestick Park almost every week now, and soon it'll be no more.  I guess that's progress, as Bay Area sports teams move on to better venues, there will always be some nostalgia surrounding this place and the stadium that once stood there.  This was a dump that even San Francisco fans acknowledge was a sub-standard ballpark and location.  But it was a historical place and one that won't be forgotten.  Whether it was the Willie Mays basket catches, the Joe Montana drives, the McCovey monstrous swings that produced wicked line drives and homers, the scrambling Steve Young scampering for a touchdown, the Beatles last convert ever, that high leg kick of Marichal, the brawls between the blue and black/orange.  Candlestick will forever be remembered.  That's a good thing even if the place was an ice box.
Posted by Evan Bladh at 8:02:00 PM