Hey Sabermetric Guys, This is the Man You Want to Manage Your Team 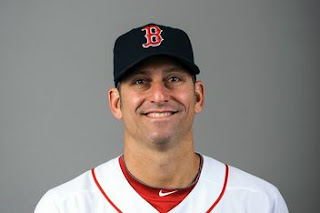 In 2006, Torey Lovullo, a 40-year old Southern California native with UCLA roots, was a successful minor league manager that was a finalist in the interviewing process to land the Dodgers managerial position.  This was the job vacated by Jim Tracy and eventually filled with Grady Little.  There's little doubt that had Lovullo been hired, Dodger history would have been much different than it turned out to be.

You see, Lovullo is a guy that buys in big time to sabermetrics.  He is probably one of the brightest minds in the game.  This year Lovullo served as bench coach to Boston Red Sox skipper John Farrell as they won the World Series.  The Sox think so highly of him that they are reluctant to allow him to leave the organization.

Theo Epstein of the Cubs loves this guy and it is reported that he wants him as his manager in Chicago.  Unfortunately for Epstein, the Red Sox organization may not allow him to interview for the position, which might stem from bad blood between the organizations after Epstein left the Sox for the Cubs a few years ago.  There are conflicting reports, some say ing that Epstein is restricted from purging the Red Sox organization of personnel due to a contractual agreement made when he moved from Boston to Chicago.  So it's up in the air whether the Reports Bosox are willing to allow Lovullo to interview for the Cubs vacancy.  Most of the time organizations don't step in the way of career advancement opportunities, but his may be an exception.

(The same thing happened when the Dodgers hired Colletti from the Giants in 2005.  The new Dodger G.M.  wanted to interview Giants bench coach Ron Wotus for the Dodgers managerial vacancy.  The Giants stepped in and did not allow the interview to take place).

Lovullo, was a journeyman utility player during his playing career that saw some major league service time with the Tigers, Yankees, Angels, Mariners, A’s, Indians and Phillies.  He cut his teeth in the managerial ranks in the minors with the Indians and Red Sox organizations.  He was Toronto's first base coach prior to his year in Boston.  Lovullo is a hot commodity in the baseball scene right now.

To get a feel for how Lovullo sees the game strategically, I highly recommend this fangraphs.com article LINKED HERE .

Here are some key quotes from Lovullo in the piece that shows his strategic stances when if comes to looking at the game:

On the sacrifice bunt: “...the equation changes depending on things like where you’re playing, who you’re playing against and what you have available in your bullpen. Overall, I’m not a fan of it. I think it’s needed from time to time, but we led the league in runs scored this year and had the fewest sacrifice bunts.
“At times, it can work to advance a guy into scoring position, but by and large, I’ve learned over the years that the sacrifice bunt can be a rally stopper. Every out is precious. You’re playing with 27, so if you give up two or three a game, you’re playing with 24 or 25. You’re giving up an inning’s worth of outs to sacrifice guys into scoring position, and the law of averages shows that just because you’re at second base doesn’t mean you’re going to score. If you’re at first base with no outs, you have a better chance of scoring runs. The numbers show that. That’s what we’re all about. We’re about putting up big innings and scoring a lot of runs...”
On player acquisition and communication with the front office: “That’s something I very much believe in, and it is ongoing here. That’s what’s so great about our front office. From top to bottom, they’re always seeking information and acquiring thoughts about guys. If there is a conversation regarding free agents, they want to get as much input as they can from every area. This past off-season, a bunch of scouts went in and [director of baseball information services] Tom [Tippett] told them the list of candidates they wanted to bring in. Several of them are here.
“I believe in that. I believe in one unit moving forward. I believe in open communication and there being no barriers between the front office and the dugout.”
On lineup construction: “...I think the second hitter should be able to hit a fastball. If your leadoff hitter is your typical leadoff hitter, and is on base, they’re going to be calling for more fastballs, so your second hitter has to be able to handle a pitcher’s best fastball.
“You want your best hitters at the top of the order to give yourself the best opportunity to score runs. Over the course of the season, the ninth hitter is going to get about 150 fewer at bats. You want your best hitters up as often as possible, so if they’re hitting one, two, three or four, they’re naturally going to get more plate appearances over the course of a full season. That’s what every team that wants to score runs should be looking for...”
On platooning: “I’m in favor of platooning. We have great value here in Mike Carp and Gomes, with their ability to go back and forth. I know they’ll hit second and I’ll platoon them there. I know they’ll hit fourth and I’ll platoon them there. We can utilize their abilities in a way that puts them in the best situations to help our team score runs. So I’m in favor of it, as long as the players know.”
On sample sizes and matchups: “I believe that after 25 at bats you’re going to start to see a good sample size. Anything less than that, you can’t really rely on it. If a guy is 1-for-2, he’s hitting .500, but it does nothing for me. If a guy is 12-for-25, that’s a sample size that tells me he’s locked in and seeing the ball well. Slugging percentage is the same way. The more at bats, the more meaningful it is.”
*********************************************
Frankly I wish the Dodgers were in the position to hire a new manager because Lovullo is a perfect for this team.   A ball club with a manager like this would thrive in an environment where the team has a lot of resources to fill holes, like Los Angeles.
Lovullo trivia: Born and raised in Santa Monica, Torey's father produced the "Hee Haw" television show that was popular in the 60's and 70's.