Serious issues have surfaced regarding the posting system for available players in Japan transferring to an MLB team.  A restructuring of the agreement has been attempted by the NPB and MLB without success.  At present there is a blind bidding process for the rights to negotiate a contract with a player.  Attempts have been made to allow the top bidders to attempt to sign a player.  News today reports that the MLB and NPB have not been able to reach an agreement on how to proceed with these potential transactions.
The result: there may be no transfer of Masahiro Tanaka to any team this off season.  With all indications showing that Tanaka was interested in coming to the Yankees or the Dodgers, there isn't a lot of incentive for the remaining 28 teams to want this dilemma solved in the next few weeks.

Tanaka was 24-0 with a 1.27 ERA for the NPB champion Rakuten Golden Eagles this past season.  He is probably the most coveted pitcher available this winter.  If the bidding system dispute isn't solved soon, look for the cost of free agent pitchers such as Haren, Garza, Jimenez and Santana to rise substantially.

The New York Daily News reported today that at the Orlando G.M. meetings, representatives from the Pirates and Yankees got into a heated exchange regarding this very topic.  The small market teams argue that posting fees should count against the luxury tax and the large market clubs want things to remain the same.

All this will really come to a head in 2016 when the Collective Bargaining Agreement expires and a new one will need to be renegotiated.  The entire posting system with Japan and additionally the signing of megastars from Cuba have put the entire salary structure with teams in a state of confusion.  With Cuban signees and Asian stars released through bidding not counting against a team's luxury tax threshold, these loopholes have allowed richer clubs such as the Dodgers, Red Sox, Yankees and now the White Sox (with Jose Abeu's signing),  to rebuild their clubs without some luxury tax complications.  Imagine how the Dodgers would have done this past season without Puig.

So today I was getting my softball equipment together, because I have a tournament on Saturday and my stuff was packed away in the garage since September when I last played.  In the cornerI noticed a couple of bats that I had packed away.  They were baseball bats that I ordered on eBay a few years back.  Someone had them up for auction and they were cracked bats of minor leaguers.  I couldn’t even remember who the players were.  I just knew they were struggling minor league prospects and I paid next to nothing for them. 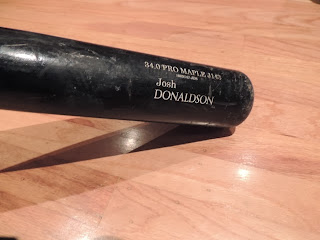 The other bat was an Adam Rosales model.  A player that is struggling to hang on and make it to the majors. 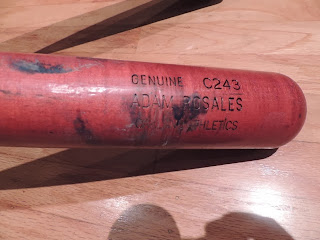 I'll take one out of two.  I completely  forgot all about those bats.  It looks like I need to seek out Donaldson at Spring Training to see if I can get him to sign that thing.
Posted by Evan Bladh at 9:51:00 PM