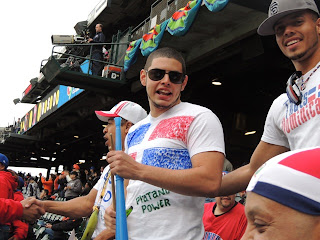 A close Dominican friend of mine has told me for several years that I need to take a vacation to Santo Domingo with him during the Winter League Baseball season there.  He claims that he'll show me around and that we can turn it into a baseball vacation and that there is nothing like a Dominican crowd at a baseball game. 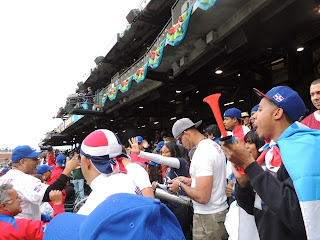 Well, last night I got a preview of that vacation in San Francisco, as we watched Team Dominican Republic defeat the Netherlands 4-1 in the heart of the Dominican section.  I think I lost about 40% of my hearing as we sat next to the drummer on one side and the air horn guy right behind us. 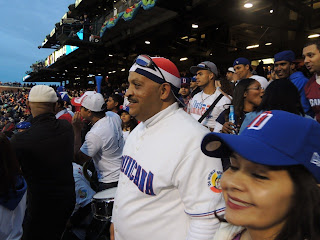 I've seen a lot of sports spectacles in my life.  I've sat amongst the "Barra Brava" in Argentina as Boca Juniors faced San Lorenzo in a heated soccer match at Buenos Aires' Bombanera Stadium in the 80's.  I've been in NBA games with the laser and fog shows.  I've seen the Mets in New York and the Red Sox in Boston at the height of their success.  I've witnessed heated Dodger Giant battles at both San Francisco and Los Angeles.  But I have to say, the energy and relentless excitement of the Dominican fans was right up there with any excitement I've ever seen at a sports spectacle.  The photos don't do it justice.  Videos up next post.