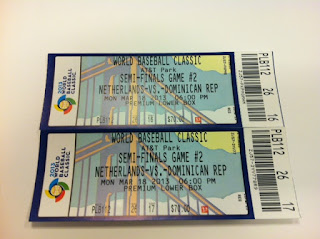 One of those pleasant surprises arrived at my desk this morning when a co-worker friend of mine dropped two tickets to the World Baseball Classic Semi-final game on my desk.

Hector has the hook ups.  He's Dominican AND he happens to have a brother-in-law who played Major League Baseball for the Indians and Yankees, (he was utility infielder, Enrique Wilson).  So instead of cozying up to my 55 inch plasma and taking in the action from my living room, 'll be knee deep in the Dominican section next to the drums, cow bells, whistles, and trumpets.  Who cool is that?

My wife thinks it'll be a chance to dance to some "merengue" music.  I don't know, but if the DR breaks out to an early lead, there is definitely going to be some dancing in the stands.

I'll post photos from the event after it's over.  The big question.  Do I dare wear my Dodger hat with the Dominican Jersey in Giantland?  I think it's gonna happen.
Posted by Evan Bladh at 11:10:00 AM