A Better Man Than Most (Part One) 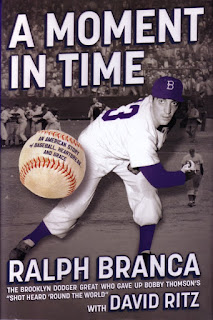 Last week I ordered the book, A Moment in Time, the Ralph Branca Autobiography and I received it yesterday.  I have literally been unable to put it down.  It's an amazing story told by a Dodger that was about as good a man as we would ever know.  I met Ralph Branca very briefly in 1998 when I had a day in FLorida and I drove over to vero Beach right when the Dodger Adult Baseball Camp was going on.  I sat in the Holman Stadium stands and watched Ralph Branca interact with the campers.  I struck up a conversation with him when I retrieved a few foul balls and brought them back to him at the dugout.  He was outgoing, friendly and kind.

I knew he had been through quite an ordeal, but I had no idea at the time that he knew that he had been cheated out of the pennant and that he had chosen to not expose the cheating Giants.    He kept the secret for almost 50 years.  This story needs to be re-told.  It isn't possible to do it in one post.  I apologize for breaking away from Spring Training news, but there are enough blogs out there that provide the daily dose of Camelback Ranch news.  I take a respite from that for a few days and write about Ralph and his life.  (Please note that  any quotes referenced in this piece come from Branca's book, published by Simon and Schuster, 2011 autobiography, A Moment in Time, by Ralph Branca and David Ritz)

Imagine if you will that you were the victim of a colossal fraud.  It was something that happened to you in a public setting.  So public a setting that millions upon millions saw it.  To make matters worse, the world blamed you for what was perceived to be your mistake.  Your failure.  You are seen as a person that choked under pressure.  You are the poster boy for “goats.”  No matter how many successes you have in life, (and there are many), you are solely remembered for what everyone thinks was your screw up.

You shoulder the burden of your failure, because you were unaware of the fraud that was perpetrated against you.  Years pass and the stigma of your failure hangs with you.  Your name is recognized by many, but not for your successes, but that one incident that everyone saw.  You come to realize that you will forever be remembered as a negative footnote in history and that when your obituary is written, that lowlight in your life will be the primary focus of nearly everyone.

And here’s the kicker.  You find out a few years later about the fraud.  You know that they cheated to wrong you.  You realize that the exposure of the hidden scandal will exonerate you and clear your name.  But you choose to remain silent.  You choose to bare the brunt of criticism for years because your pride and integrity will not speak out and make excuses.

That is the story of a real man,  One who swallowed his pride and took criticism as the biggest goat in baseball history because he knew the truth and that was all he needed to live with himself.  He knew what the real truth was.

Ralph Branca, now entering his 88th year on this earth decided to finally open up and let the world know what's on his mind.  In a 2011 autobiography, A Moment in Time, he tells his story.  As the hurler that served up Bobby Thomson’s “shot heard round the world” in the 1951 pennant clinching playoff, Branca who was for over fifty years labeled as the despondent loser in that historic playoff loss is now finally able to give the world his perspective, not only of that historic game at Coogan’s Bluff, but of his entire life.

He has a self-professed photographic memory, which explains why he was the all time winner on the NBC game show, Concentration (with 17 consecutive wins).  That memory proves valuable as he recounts his long and interesting life.

Branca is a good man.  A religious person that hasn’t missed mass in years.  One of 17 children raised in a good family in Mt. Vernon, New York.  An honest person that learned to give an honest effort and not be judgmental of his fellow man at an early age in life.  The son of a first generation Italian immigrant father and a Hungarian mother.  Branca’s home was open to friends of all religions, races and ethnic backgrounds.   “I cannot remember an incident of racial prejudice,” he says today.  “I was taught to love my neighbors, and because I knew no better, I did just that.” 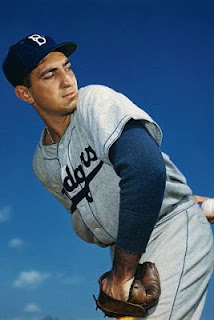 With older brothers that taught him the ins and outs of football, basketball and baseball.  Branca was a fine athlete and he was the largest Branca boy in stature, eventually sprouting to 6’3” and well over 200 lbs.  He naturally developed into a power armed right handed pitcher with a blazing fastball.  After his sister reached out to the three New York teams regarding tryouts, the lone team that called him back was the Brooklyn Dodgers.

As a 17 year old in 1944, Branca had his eyes set on joining the Army in tail end of World War II, but an asthmatic condition and punctured ear drum made him ineligible for any of the branches of service.  Instead came a letter to him from Branch Rickey requesting that he report to the Dodgers Montague Street offices in Brooklyn, and that he bring an adult gaurdian along with him to grant him permission to sign a contract.  Rickey cut to the chase and offered Ralph a $90/month contract to play with the Dodgers D league team in upstate Olean, New York.  Branca eagerly accepted the deal with his mother’s consent.

Ralph’s 1944 season as a 17 year old was nothing real impressive.  He had a 5-5 record with a 4.63 ERA, but that off season he physically grew.  Ralph arrived at Spring Training having added four inches in height and he estimates that his fastball velocity increased five or six MPH in speed, probably to the mid 90's.  The major leagues were depleted of many stars due to the war effort.  In 1945 he was up with the big club as an18 year old.  He bounced between Triple A Montreal and Brooklyn but he was around enough to start 15 games for the Dodgers going 5-6 with a 3.04 ERA over 109 innings.

Still a teenager.  Branca took a bus and two different subways to travel to Ebbets Field for games.  He continued to do so up until he was married following the 1951 season a full six years later.  With his increasing salary as the years passed, he bought his parents a larger home in Mt. Vernon and he continued residing there with them.

Branca was a kid.  He was only a few months removed from being a fan.  He soaked in the special experience and enjoyed it from the word go.  He talked of how he’d jump on the subway on the way back home and kids would engage him in conversation on public transit almost all the way back to his home.  “They’d walk me to the subway and several would actually ride the train with me through Brooklyn, Manhattan and the Bronx.  They were young teenagers, 12, maybe 13 years old-and of course I was still a teenager myself.  They’d ask questions about the game.  How do you pitch to Stan Musial as opposed to Mel Ott?   How do you throw a slider. What’s it like to be on the same team as Dixie Walker?  I loved talking to those kids, I enjoyed their company.  It was only a few years before that I was their age, dreaming the same dreams dancing through their heads.  This was a time when players were approachable and actually moved and worked  among the fans.”   It's hard to imagine a similar circumstance with players today.

He tells the story of Hilda Chester and her loud demeanor at games.  Branca claimed that he learned from veterans to ignore comments from fans, as it was taboo to acknowledge that they were heard and that they could effect the players in any way.  But Hilda was insistent with him one day.  “Ralph Branca, look at me when I’m talking to you!” She screamed at him incessantly.  He eventually relented and she gave him a note and instructed him to give it to his manager Leo Durocher.  “I walked over to the dugout and handed the note to Leo,” he said.  “He read it and made a pitching change.  The reliever bombed and we lost the game.  Back in the clubhouse I heard Leo say, ‘From now on, any time I get a note from Rickey, I’m gonna tear it up.‘  ‘It didn’t come from Rickey,’  said Branca, ‘It came from Hilda.’  “Why didn’t you tell me?” he barked. ‘You didn’t ask.’”

As young as Branca was, he was immediately recognized for his leadership qualities.  You’d think that Pee Wee Reese would be the man that took the lead with regard to the Dodger players, but when he returned from the war, he approached the young Branca who was 20-21 years old and asked him to be the “team rep” they called it.  It wasn’t a position that carried a lot of weight in the pre-union days, but Branca took up causes on behalf of the players such as getting the Cubs to add a restroom adjascent to their dugout and representing the players in minor grievance issues. 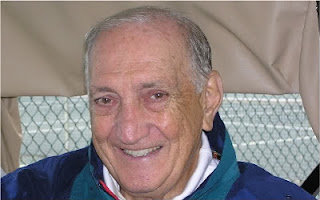 This leadership role would follow Ralph throughout his career and later in life as he helped organized the Baseball Assistance Team (BAT) to aide retired players that were experiencing financial problems and were in need of medical/psychological assistance.

What few seem to remember was the influence Branca had in assisting the acceptance of Jackie Robinson as he entered on to the scene.  Not only did he serve a leadership role and as an example in that aspect with the Dodgers in 1947, but it would coincide with his greatest season in the majors.

HERE is the link to PART TWO