8 Years from Now, Some Optimistic Predictions

Tonight was ticket draw night with the group of co-workers that have Giants season tickets.  I didn't do too too bad.  I drew the Dodgers three times and then I was able to get a few bobble head give away nights, meaning I can sell those seats and purchase more tickets for when the Dodgers come to town.

This is my 17th consecutive year in which my employer has banished me to the land of orange and black and I take part in their season ticket plan.  I'm fairly certain that I'll spend the rest of my days here due to the familial roots that are now entrenched in this place.  Retirement looms on the horizon, but it's probably 8 years away.  It's a year in the distant future (2021) that is constantly in the back of my mind, as I plan on spending much of the baseball season enjoying it in the shadows of Dodger Stadium after that date has arrived.

Eight years doesn't seem like a long time in the grand scheme of things, but in the life of baseball, it can seem like an eternity.  Where will the Dodgers be in 8 years? Will any current Dodgers be on the roster?  If I were a betting man, this is how I would predict things to follow.  Please note, my predictions are on the optimistic side. 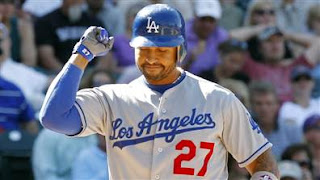 36 year-old Matt Kemp, now two years removed from the conclusion of his multi-year deal currently in place decides to finish his career as a Dodger.  He is breaking out the first baseman's glove in Spring Training and hoping to have another productive year.  He has a few career milestones he'd like to achieve.  22 homers short of 400, Kemp is attempting to pass Duke Snider as the all-time Dodger home run hitter.  He's zeroing in on 2,500 lifetime hits as well.  If Kemp can prolong his career in the Dodger infield, he's hoping to approach the 500 homer/3,000 hit plateau before the age of 40.  It'll be a stretch to make it, but Kemp continues to be a workhorse in the gym and is staying in shape.

Clayton Kershaw has just won his 210th career victory to close out the 2020 season.  He too, has remained a Dodger after signing a long term 7 year deal after the 2013 season for upwards of $180 million.  Though his contract concluded following the 2020 season, the Dodgers inked the 32 year old left-handed to another 3 year deal at $100 million because he won 18 games and finished second in the Cy Young voting to Greg Maddux Jr., of the Cubs.  Kershaw has taken home the Cy Young Award in 2013, 2015, 2016 and 2018 having escaped arm injury throughout his 13 year career, all with the Dodgers.

Zack Greinke retired following the 2020 season at age 36.  He currently is working in the Dodger front office as an assistant to Dodger General Manager Logan White.  Greinke had a fine career with the Dodgers, having won 93 games in Dodger blue before going down with injury in the final year of his six year $148 million contract.  The Dodgers signed him to an incentive laden deal in 2019, but he never could recover from the elbow problems.

Yasiel Puig is a baseball superstar and was the leading vote getter on the American League All Star team.  After spending seven years in the Dodger organization in a steal of a deal $42 million contract, the two time National League MVP filed for free agency after the 2018 season at age 30.  The New York Yankees signed him to a seven year $300 million contract and he patrols center field for the Bronx Bombers.  Puig, a fan favorite in Los Angeles, broke into the Dodger outfield in 2014 and won the National League MVP in 2016 and 2017.  In his six years as a Dodger, Puig hit 194 homers and stole 222 bases.  In his 2017 MVP season, he hit 47 homers and drove in 123 runs.  The catalyst of four Dodger pennant winners and two World Championship teams, the tandem of Puig and Kemp terrorized National League pitching for a four year period.  Dodger fans remain miffed that Puig turned down a lucrative offer to stay in L.A.

Corey Seager, the 27 year old Dodger third baseman, is coming into his own.  After breaking in with the big club in 2016 as a 22 year old rookie, he took the Rookie of the Year hardware home and hasn't looked back. In 2020, Seager was an offensive force, batting .312, hitting 32 homers and OPSing at .978.  A three time all star, Corey is a fan favorite and having signed a 7 year deal, he may turn out to be the greatest Dodger third baseman in history.

Kenley Jansen also remains with the Dodgers.  His cutter has developed substantially and after seven years as the Dodger closer, he has 250 lifetime saves.  Known as a clutch reliever with a lot of post season experience, Jansen is arguably the greatest Dodger relief pitcher in history.  Now 32 years old, Jansen has lost a few ticks on his fastball, but still can throw heat when necessary and oh, that cutter is nasty.

Care to make any other predictions?  Dee Gordon, Matt Magill, Chris Reed, Javy Guerra, Shawn Tolleson, Zack Lee, Chad Billingsley, Don Mattingly.  Where will they be and what will they have accomplished?