Did Koufax Ever Throw the Brushback? Ask Lou Brock

There is a fallacy that has made the rounds of baseball circles that says Sandy Koufax was too nice of a guy to brush back opponents.  The truth is, Sandy didn’t hesitate throwing the occasional brushback and standing up for his teammates.

Jane Leavy addressed this topic a bit in her excellent biography of Koufax, Sandy Koufax, A Lefty’s Legacy.  She tells the story of Bill “Moose” Skowron, who was traded to the Dodgers in ’63.  Skowron as a Yankee in the 1962 World Series had tripled off the high kicking Giant starter Juan Marichal in game four of that series.  Juan attempted to get his revenge against Moose now that he was a Dodger in the first game they met.  Skowron explained what happened:

“First time up, he low bridged me, I’m hitting like two-twenty.  I go back (on defense) to first base.  Willie Mays comes up.  Sandy threw one up tight and Willie’s cap flew off.  They said Sandy didn’t throw at anyone, but he protected his players,  I blew him a kiss.” (Source: Sandy Koufax, A Lefty’s Legacy.  pp. 180-81,Jane Leavy, Harper Collins, 2002)

Why did Koufax get the reputation from fans and players that he didn’t throw inside or brush guys back?  Well it’s probably the Marichal/Roseboro incident that did that.  Skowron said that he often just blew players away in embarrassing fashion.  He opined that Koufax didn’t like putting guys on base that he could easily strike out, and he was skilled at making them look foolish striking out.  In a sense, that was more effective that hitting them.

On August 22, 1965, the Giant/Dodger brawl that surfaced from the fight between Marichal and Roseboro resulted in giving Sandy an unfair rep that he didn’t protect his players.  Nothing was further from the truth.  Reports from players on the Dodger bench were that Koufax wanted a piece of the Giants that day.  “Who do you want me to get?” he said to Roseboro in the dugout early in that game.  “I’ll take care of it,” said Rosie, hinting that he’d brush back Marichal with throws from behind the plate back to the mound.  Roseboro knew that if Koufax was ejected, it would hurt the team in the race and they could ill afford to lose their best pitcher with the pennant on the line. 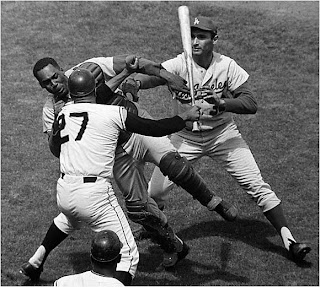 The rest is history.  Marichal was suspended for eight games, a significant portion of the September race, and the Dodgers won the National League Title (and eventual World Series), beating out the Giants by two games.

Then there is the story of Koufax hitting Lou Brock.

May 24, 1965.  The defending champion Cardinals came to L.A. for a three game set.  After the Cardinals took game one, the second game of the series was one for the ages.  It was a true barn burner pitting future Hall of Famers Bob Gibson against Don Drysdale as the Dodgers shutout the Cards 2-0.  Big D pitched a 1-hitter, allowing a single to Curt Flood on the first pitch of the game.  Nobody came close to getting a knock off of Drysdale the rest of the way.  This wasn’t a game chalked full of bean balls and brush backs as you’d expect from those two intimidators.  Only Dodger light hitting second baseman John Kennedy fell victim to the HBP.  No retaliation, simply one that got away from Gibby.

In the rubber match of the series, Sandy Koufax faced Cardinal starter Curt Simmons.  What is remembered from this game was the exchange between Koufax and a young speedy outfielder for the Cards, Lou Brock, in the first inning.  Lou laid down a bunt and embarrassed Koufax, who failed to field it cleanly, thus allowing Brock to reach on an infield single.  What followed was the young speedster stealing second, then third.  He eventually scored on a Ken Boyer sacrifice fly.  The Cardinals scored a run off of Sandy by taking a page out of their own offensive playbook.

Apparently Koufax was steaming over the events.

Now Sandy was a true competitor.  Many thought his low-key demeaner showed a lack of inner competitiveness and nothing could be further from the truth.  He was a level headed pitcher that never let his emotions get the best of him, but in this instance, he wasn’t going to let the young Brock get away with wreaking basepath havoc on him without paying a price.

Drysdale knew what was going to happen, and he turned to Dodger rookie Jim Lefebvre and said, “Frenchy, I feel sorry for that man...Sandy doesn’t appreciate that sort of thing.  (He) gets mad enough when you beat him with base hits, but when you score runs without hits, Look out.”

There are different accounts on how the events unfurled, but one thing everyone agrees on: when Brock came to the plate in the top of the third, the first pitch he received was a fastball that drilled him in the back.  It had “a thud that had a crack in it,” said Cardinal outfielder Mike Shannon.   Drysdale said “you could hear the thud all through the stadium.”  Dodger catcher Jeff Torborg described it best: “It hit him so darned hard that the ball went in and spun around in the meat for a while and then dropped.”

What everyone agreed with was that this was a world class beanball that hurt a lot.  From there, the stories get fuzzy.

Drysdale is reported to have said that Brock refused to rub it and attempted to "man up" and make it to first, but couldn’t.  He said that Brock dropped to his knees while attempting to walk to first, and had to leave the game right there.  That’s a great story from Big D, but unfortunately, it isn’t true.

Here is what happened.  Brock made his way to first base and like so many star players in the game do, he made Koufax pay again.  He promptly stole second base.

But the beaning took its toll on Brock.  First, because he had to leave the game two innings later and go to the hospital for x-rays, (that were negative).  Second, because the beaning actually knocked him out of the next five games, with only a brief pinch running appearance a few days later.  Third, Brock never attempted a bunt off of Koufax again.