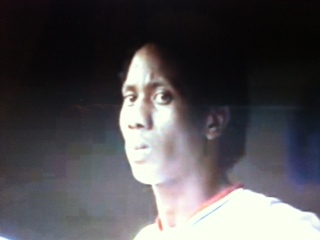 There was very sad news about Pascual Perez today.  A troubled right handed starter for numerous teams who had his issues with addictions.  His best years were with the Atlanta Braves.  He was found dead today in his Dominican Republic home, the victim of a violent home invasion murder.  The coronor in Santo Domingo estimates that the attack occured eight hours before Perez was found by his wife at 8:30 Am this morning.  Perez was 55 years old.
Nicknamed “I-285” due to his failure to arrive for a scheduled start against the Dodgers in 1982 because he circled around on Interstate 285 for hours trying to find Atlanta’s Fulton County Stadium, Perez was a flamboyant player that opponents hated due to his show-boating and exhuberance on the mound.The home fans loved his antics though as he would used his pointed finger in imaginery fashion to shoot opponents dead after striking them out.

On the day he got lost trying to find the ball[park, Braves Manager Joe Torre was forced to start Phil Niekro in his stead.  Perez arrived in the second inning of he game.  He finally pulled over because he was almost out of gas.  A gas station attendant recognized him and got him on the right track and to the game.  Perez was particularly important to the Braves that season, a year when the Braves beat out the Dodgers by one game for the Division title.  He had seven quality starts in the final month and a half of the season playing a key roll in their title drive.

Perez’ brothers included other major league pitchers Melido and Carlos.  The latter was a notable Dodger in the late 90’s, and not for good reasons.  Carlos had addiction problems too and was known to upset opponents with his showboating as well.  His Dodger career was less than stellar.

Pascual Perez is also remembered as being the target of  several beanball wars, most notably a wild 1984 game with the San Diego Padres.  This August 12th game got so out of hand that I thought the umps were going to have to call it.  Take a look at the MLB clip.  That game was on highlight reels for years.

May he rest in peace.  My thoughts and prayers are with Pascual's family.
Posted by Evan Bladh at 8:03:00 PM