Hyun-Jin Ryu, Youkalis, Torii Hunter...Is There Anyone Not Rumored to Join the Dodgers?

With the announcement that an MLB team has posted over $25 million for the rights to negotiate with Korean left handed starter Hyun-Jin Ryu, rumors are circulating that the team that won the bidding war is the Dodgers.  This shouldn't be surprising to any of us.  The Guggenheim group is sparing no expense to assemble a championship club. 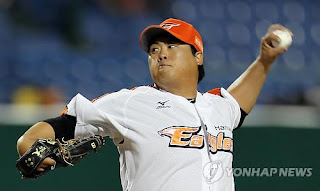 Ryu was instrumental in leading the Korea National team to the 2008 Olympic Gold Medal at the Beijing Olympics.  He tossed 8 1/3 innings against the Cuban national team in the gold medal game, winning 3-2.  He also has World Baseball Classic Championship experience in 2009 hekping the Korean to a second place finish against Japan.

The 25 year old lefty throws and assortment of 4 pitches.  With a fastball hitting as high as 94 MPH, Ryu set the Korean Baseball League record by striking out 17 in one game this past year.   He was 9-9 with a 2.66 ERA, striking out 210 batters over 182 innings.   Some believe he is best set to be a reliever in the Big Leagues but I have a hard time believing that the Dodgers would pay such a hefty sim for additional bullpen help.  Ryu is going to start.

This is a pitcher that puts up innings.  He's a workhorse having led the Korean Baseball Organization (KBO) in strikeouts five of the last seven years.  He also led the league in wins once and won the ERA title twice.   He has thrown between 165 and 211 innings in the KBO since joining the league in 2006.  His lifetime numbers in the KBO are: 98-52, 2.80 ERA.   In international competition aside from success in the WBC and Olympics, he has led his national team to two Asian Games championships.

A pitcher with a hefty build he is listed at 6 feet 2 inches and 215 lbs.  Video clips of him show him to be probably closer to 240-250 though.  Some compare him to David Wells for that very reason.  Ryu is represented by Scott Boras, so expect the Dodgers to pay handsomely for him.  There is a 40-day window to negotiate a contract.  If nothing is settled in that time, The 25 year old lefty will return to the Hanwha Eagles.

Look for Ryu to be signed and the Dodgers to see how things play out in Spring Training with the starting staff.  The addition of Ryu means they enter Spring Training with Kershaw, Beckett, Capuano, Harang, a questionable Billingsley and Lilly and the new Korean left hander.  If opening day approaches and there are seven healthy starters, I wouldn't be surprised if one or two are dealt.  If there is one thing we have noted with Colletti, he seems to collect an over abundance of starting pitchers each year becasue he knows full well that there is usually someone that will break down.

The reports on Billingsley were encouraging this past week, but the fact that he is returning from a partial elbow ligament tear should be a major concern.  As much as we all want to see him next year, isn't in the Dodgers best interest to have him go under the knife and completely heal?  You have to figure that Bills will be overly cautious and perhaps will hold back a bit to remain healthy.

Ken Rosenthal has mentioned that the Dodgers are interested in free agent Kevin Youkilis as a third baseman this year.  Youk had a career low .328 on base percentage.  For those that are against this possible move because of the emergence of Luis Cruz, it is important to look at Cruz's OBP of .326 this past year.  Maybe one year of Youialis and using Cruz as the super ultility guy is the way to go next year.  This is all contingent on signing Youk to a 1 year deal.  Anything more than that would be a waste on the aging third baseman.  I believe that Youkilis may be seeking a longer deal in an attempt to nab one last big money contract.  He is 33 years old.

It is also reported that there is interest in Torii Hunter as well.  Hunter, at 37 years old, had a fine year and the thought of adding him is an interesting proposition.  San Francisco is also rumored to be interested in Hunter who would fit in well in the Giant outfield that is lacking of a solid third outfielder.  If Hunter is willing to take on the 4th outfielder role with the Dodgers, this might be a good move.  The friendship between Kemp and Hunter is well chronicled.  Is that enough for him to accept a role of reduced playing time?