My Thoughts on the Announcement from Mr. Dodger Thoughts...A Blow to the Dodger Blogging World

On my best day of literary eloquence I’m not half the writer that Jon Weisman is.  In the world of sports writing, Weisman paints the Sistine Chapel while I put together stick figure drawings.  He’s that good and I think there is something wrong with the world when he can’t earn a living writing about the Dodgers, but I learned a long time ago that things don’t always line up as they should.  Jon writes about movies and TV shows, or he writes screenplays, and that pays the bills.  Our loss is the entertainment industry’s gain. 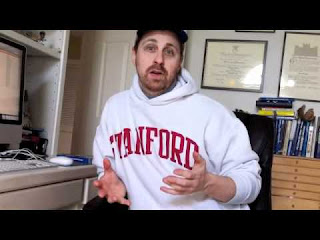 He inspired us all and many a blogger hasn’t been able to come close to touching his brilliance.  It’s got to bother him that a blogger like me can't come close to his standards, but he’s much too much of a gentleman to be overly critical of our substandard efforts.  He showed us that we, as fans, have a voice. That we have a place in the world that is to be respected and heard.  We don't have to be towing the neutral line as fans in order to paint an impartial and unbiased picture of things.  As bloggers, we do that, and he led the way.  Mr. Weisman planted the seeds of passion and impartiality in so many of us that now hold prominent places in so many fans daily reading habits.

Do you really think that the Dodgers would be taking bloggers seriously had Jon Weisman not paved the way?   We have a space in the press box for heaven’s sake.  We have a full time blogger (Eric Stephen) that is a permanent fixture in Dodger pressers now, and a highly respected one at that.

You see, Jon is a fan.  He showed us that there is a place for fans in the baseball writing world.  He was able to accurately and concisely explain the attributes of sabermetrics.  I must say that my old school ways of following the game with a look at traditional stats changed when I started reading Dodger Thoughts.  Yes, I know Bill James is the guru, but it was Jon Weisman and to some extent, the contributors on his blog that sold me on the sabermetric way to follow the game.

Dodger Thoughts has evolved and moved from numerous sites and formats but one thing was always certain, when Mr. Weisman wrote, it was a respected voice and had to be heard.  When Jon mentioned my blog on his site the first time, I was flattered beyond comprehension.  “Evan Bladh Sr. hit one out of the park with his post on Charlie Hough....” he said in January, 2011.  I was prouder of that comment than any recommendation I had ever received.  When Jon added my site to his blog role I knew I had made it.  When he posted a comment on my site, I was thrilled.  It didn’t matter that he was calling me out on something that he disagreed with,  I didn’t care, it was Mr. Dodger Thoughts himself on my blog.  That was thrilling in itself.  It was as if Jim Murray himself was commenting.  I hold Mr. Weisman in that high of esteem.

(By the way Jon, I was right, It was April and I said there was no way Kemp would steal 40 bases again this year and you disagreed.  I never said that injuries couldn’t play a factor in my prediction either, so I was right).

When he published his book, 100 Things Dodgers Fans Should Know & Do Before They Die, I ordered it on day one.  When he moved from the Toaster to the L.A. Times, then to ESPN LA and to his present day spot, I followed him immediately with each move.  When he apologized and said that he felt he had neglected his site due to his real job and family duties, I didn’t care.  I was just happy that he still was around and he posted when he could. 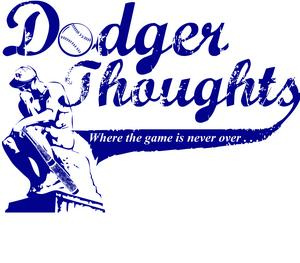 Today though, I must admit, the announcement of his Dodger Thoughts hiatus was a bit of a punch to the gut.  This is THE DODGER BLOGGER, and his voice will not be heard too frequently.  This was the voice of reason that got us through the off-season doldrums.  This was the voice that always seemed to provide true logic to arguments.  The only solace I find in his announcement is that he isn't going away forever, and I have a feeling that when he posts, they will be real quality posts.  We can look at it this way.  Vin Scully only calls home, California and Arizona games and we are eternally grateful for them.  We know that when Vin calls a game, the genius and eloquence will be there.  We go back to our early childhood. We know it's summer.  We remember that transistor radio under the pillow at night, or that dreary looking image from Candlestick Park that he narrated during a tense pennant race.

I'm pretty sure that when the infrequent post from Jon appears, it'll be real good stuff.  The memories will flow back.  He'll remind us again why it's great to be a Dodger fan.  He'll get our minds thinking, our juices flowing.  We'll remember the good old days of the toaster when he was the only blog in town, or how his reporting was much more accurate than that of the mainstream papers beat writers.  We'll be reminded that he is the Dodger blogger.  the man that started it all, and he'll remind us that he's a humble fan, just like you and me.