And the Wins Just Keep On Coming

This is getting fun, and now we're 8-1.
With the Dodger 6-1 victory tonight, I must say that anything short of a sweep of the Padres in this series with Kershaw going tomorrow would be a disappointment.
Ted Lilly made his first start of the year and performed as he closed out the year last year.  After a lackluster minor league start earlier in the week, Lilly was dominant tonight in his first start of the year.  Matt Kemp is on the way to his second consecutive NL Player of the week honors.  Kemp is proving night after night that he may be the best player in baseball.
*********************************************************
I attended the Tristar Collectibles autograph show in San Francisco at the Cow Palace today wherer I landed some autographs on authentic jerseys from Rollie Fingers, Johnny Bench and Ferguson Jenkins today.  There was a lot of cool Dodger stuff there for sale.  I was able to pick up a nice autographed 8X10 of Maury Wills, Wes Parker, Dusty  Baker and Bill Singer.
I saw Jose Canseco, Carlton Fisk, Frank Robinson and Pete Rose there today too. A true all star event today.
Though Rose and Bench were seated within 12 feet of each other, neither one acknowledged the other’s existence.  It looks like Rose isn’t going to forgive Bench for his negative remarks about the “hit king” a few years back.
Frank Robinson is moving very slow these days and his lines take forever because he signs so slowly.
Jose Canseco was busier than I thought he would be.  Though this photo I took of him shows he had no one to sign for.  It tells an inaccurate story as he had just finished signing for about 50 people.  I wanted to ask him if he was Jose or Ozzie, but I couldn't get close enough. 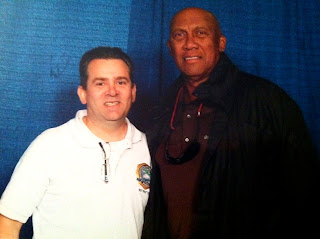 Ferguson Jenkins is a very nice guy.  I posed for a photo op with him.   A very friendly and easy going guy.