A Guest Post - A Fantasy Come True...And Then Some

It has been a few days since I became acquainted with Ron Cervenka, but we have so much in common, I feel like I've known him for a while.  He runs a superb Dodger related forum called : www.ThinkBlueLA.com.  It has some devout Dodger followers, many with roots dating back to Brooklyn.  These guys are diehards and they know their Dodger baseball.  I could peruse the postings over there for hours.  I highly recommend that everyone check it out.  Just be ready to dedicate some time to it though.


One of Ron's ThinkBlueLARon's followers, Harold Uhlman, answered a question I posed this site a few weeks ago and won an Opinion of Kingman's Performance T-Shirt,   Harold requested that I send it to Ron, because in the end...he was the one that provided the answer to the question that I posed, so I did.


A few days later I received an email from Ron in which he thanked me for the shirt.  I checked out his site, we have posted back and forth through emails, he posted on this blog, I posted on his forum.  To make a long story short, we have a lot in common.  Today he sent me an article that he wrote detailing his first Dodger Adult Baseball Fantasy Camp experience.  He submitted it elsewhere, but it didn't get posted for various reasons.  I feel privileged to be asked to post it here.  After reading this piece, I KNOW I have to go to the next fantasy camp.  It is a true adventure and Ron appropriately titled it:


"A Fantasy Come True...And Then Some"
by Ron Cervenka

As our shuttle pulled into Dodgertown, we could feel the magic and excitement in the air (along with a few raindrops). We checked into our room and the first thing that I said to Darin was “I wonder if Duke Snider or Sandy Koufax stayed in this room? Or Gil Hodges? Or Don Drysdale? Or Pee Wee Reese?” We were pretty sure that Tommy Lasorda had not because it was too far away from the dining hall - haha! After unpacking, Darin and I walked to the famous Dodgertown Lounge, which we had heard a great deal about.

After “officially” being allowed into the locker room on Sunday (we knew exactly where to go) and getting our gear, we had an optional afternoon workout, although nearly everyone attended. We were also permitted to get autographs from the many Dodger and Yankee greats on hand including Tommy Davis, Jeff Torborg, Jerry Reuss, Rick Monday, Steve Yeager, Ron Cey, Lenny Harris, Kenny Landreaux, Bill Russell, Don Zimmer, Frank Howard, Moose Skowron, Jake Gibbs, Tony Kubek, Don Larsen, Ron Guidry, Goose Gossage, Dennis Rasmussen, Ron Davis, Jim Leyritz, and Steve Whitaker. Talk about a who’s who of former Dodger and Yankee legends! 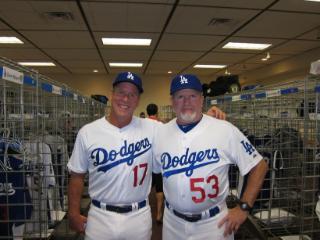 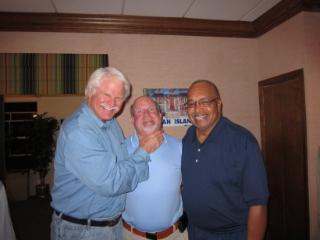 Darin and I in our home whites - Getting throttled by my manager Jerry Reuss and two-time NL batting champ Tommy Davis.
After a workout on Monday morning, the draft was held in which every camper was placed on a team. I was drafted by Team Rancho Cucamonga under the leadership of manager Jerry Reuss and coaches Kenny Landreaux and Travis Barbary. As luck would have, Rob, Phil, and Ray Cohen were also on my team, as were several long-time veteran campers. Darin was drafted by Team Chattanooga under the leadership of Co-managers Rick Monday and Steve Yeager and coach Marty Reed. I played first base, second base, and right field while Darin pitched and played third base. 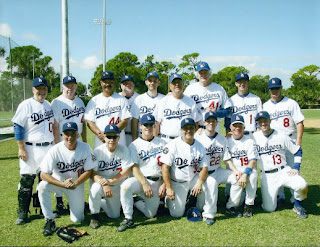 Team Rancho Cucamonga
Over the course of the next five days, we played six games including double-headers on consecutive days. Needless to say, this old boy was tired, not to mention a little sore. That being said, I owe a serious debt of gratitude to Juan Bustabad for his earlier advice to stretch, throw, and run, as I was able to avoid the very crowded trainer’s room (except to grab an occasional cold and much needed beer at day’s end).
During our lunch break on Wednesday, camp coordinator Guy Wellman made the announcement that Peter O’Malley, Chan Ho Park, and Hideo Nomo had just bought back Dodgertown from the city of Vero Beach. The announcement was met with a roar of cheers and applause. And even though it is highly unlikely that the Dodgers will ever return to Vero Beach for spring training, there will once again be Dodger Blue blood flowing through Dodgertown. 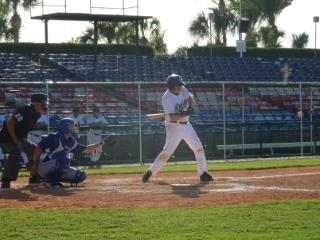 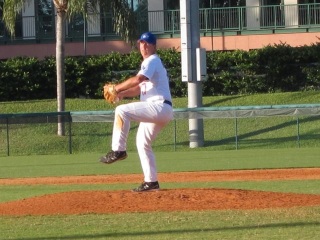 Although my camp stats were on the weak side (3 for 16 = .188), Darin Ryburn had an outstanding camp. He ended up winning the Don Drysdale Award for being the outstanding right-handed pitcher. My teammate Phil Cohen won the Sandy Koufax Award for being the outstanding left-handed pitcher.
When we returned to the locker room for lunch after our Thursday morning games there was an electricity and buzz about the place, but I couldn’t figure out why - and then I did; HE was there, the “Ghost” himself. Vero Beach resident and the greatest Dodger left-hander of all time Sandy Koufax had stopped by to visit with his former teammates Tommy Davis, Frank Howard, and Jeff Torborg (who caught his perfect game). The excitement was overwhelming. But as quickly as it started, it subsided when we were told that Sandy would not be visiting with campers nor signing autographs. I was heartbroken. All my life I had sought to get a baseball personally autographed by Sandy Koufax - the Holy Grail of autographed baseballs. Not gonna happen.
But then there was a little divine intervention. One of my fellow campers, 60-year old Stan Kunin of Calabasas, California who is completely deaf, told one of the coaches that he had met Sandy when he was 12 years old at a bar mitzvah and that he had a photograph taken with Sandy at that bar mitzvah. Stan asked the coach if he would please show the photograph to Sandy. The coach took the photograph into the trainer’s room (behind its closed door) and a few minutes later came back out and told Stan (who reads lips perfectly) that Sandy would like to see him. A very excited Stan Kunin went into the trainer’s room and came out a few minutes later with his 48-year old photograph personally autographed by the great Sandy Koufax. As you might imagine, Stan had tears in his eyes.
Also in the trainer’s room with Sandy, Tommy Davis, Frank Howard, and Jeff Torborg was Tommy’s personal PR guy Jack DeLance, whom I had also become good friends with. At Jack’s urging, Tommy asked Sandy that if it were done in an orderly manner and one at a time, would he be willing to sign autographs for the other campers. (Apparently on a previous trip to camp several years earlier, Sandy had been swarmed by campers and it was an ugly scene, after which Sandy said that he would never again sign for campers - funny how it only takes a few to ruin it for everyone). After assurances from Jack and Mark Stone, Sandy agreed to meet with and sign for EVERY camper who wished, including one of his all-time biggest fans - ME! 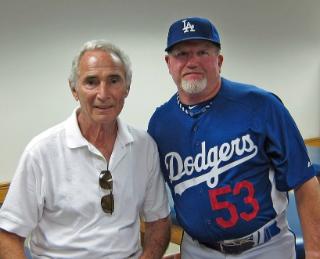 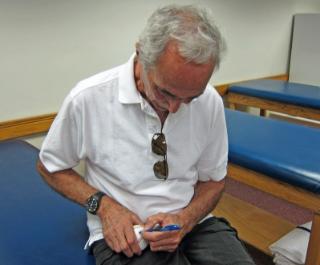 After thanking Sandy profusely for taking the time to meet with campers and sign for us, I thanked him for all of the great Dodger memories he gave to all of us. In true, humble Koufax style, he merely smiled and said “You’re welcome.”
To say that I was overwhelmed would be a gross understatement. I had just met, shook hands with, been photographed with, and got a baseball autographed by one of the greatest baseball legends of all time. I was numb.
The Thursday afternoon game, which started an hour later than scheduled to allow for everyone to meet with Sandy, was the campers vs. coaches game; and say what you will, these former old players and coaches are still very good! They flat out kick our asses. While we may have had our fantasies, they clearly still had their talent. Regardless, it was a fun but very long game, as each of the seven teams played two innings on defense and every player batted once. Gary “Chicken” Ingram struck me out on a filthy cut fastball, which he later apologized to me for throwing - haha!
The week passed in the blink of an eye and before I knew it camp was over. After an outstanding final dinner and awards ceremony, it was time to pack-up and say goodbye to this group of guys (and one lady camper) whom I had grown so very close to in such a short period of time.
Although the baseball experience was absolutely incredible and something that I will think back on often, it is the friendships and the legacy and magic of Dodgertown that made fantasy camp one of the greatest memories of my entire life; memories that I shall cherish forever. This was truly a fantasy come true… and then some.
Author’s note:
Because of the overwhelming success of this resent fantasy camp, talks have already begun for another joint Dodger/Yankee fantasy camp to be held at Dodgertown next November. If this is something that you might be interested in, I encourage you to check in frequently on the LADABC website at: www.ladabc.com
About the author
Ron Cervenka is a life-long Dodger fan and season ticket holder. He and his son Tim were featured in the 2008 DVD movie “Bluetopia - The Dodger Movie.” Ron recently retired from the Burbank Police Department where he served for thirty years. In addition to his love of the Dodgers and baseball, Ron is also an avid tournament bass angler and a huge NASCAR fan. He also manages a fan-based Dodger forum called www.ThinkBlueLA.com.Ron lives in Santa Clarita, California.
Posted by Evan Bladh at 7:32:00 PM