An Anniversary Worth Noting

In about a week, it will be the 65th anniversary of an interesting footnote in Dodger History.  On February 20, 1947, the Dodgers arrived in Havana Cuba for Spring Training.  Many remember 1947 Spring training as the year the Dodgers spent in Havana and as the Spring Training intended to groom Jackie Robinson for the Major League Roster.   And that was partially true.  The distractions of racial tensions would not fester during the Spring Training games on the island.  Cuba had, after all, integrated their baseball league in 1900, a full 47 years earlier.  What few people recall about the Dodgers arrival in Cuba that year was that they were not greeted with much fanfare.  The fact was they were pretty much ignored by the Cuban baseball faithful.  They had other things that occupied their interest.

In 1947, the Cuban Baseball League had a fierce championship series being contested between the two Cuban baseball powerhouses at the time.  The Havana Reds (known as the Leones), and the Almendares Blues (Scorpions).  These teams had been battling each other as far back as the 1870s with a rivalry that was as emotional and contentious as any Dodger/Giant battle.
Almendares had made a stunning comeback at season’s end to reach the final against Havana, being 6 1/2 games behind with 13 to play.  They were able to tie Havana in the standings by the end of the regular season.  The final game was on February 25, 1947 and 40,000 fans packed into the Gran Estadio de la Havana which was about 5,000 over capacity.  The Stadium was of Major League caliber and only a year old, complete with modern lights and a perfectly manicured playing surface.   Almendares won behind a complete game by South Carolina Native and former St. Louis Cardinal Max Lanier who won his second game in three days by accepting $500 to pitch on one day of rest. 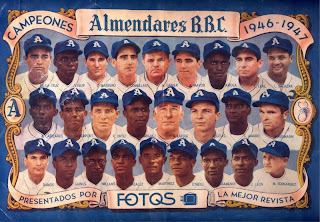 As the Dodgers attempted to get their work in, there were celbrations in the streets of Havana celebrating the Blues victory.  Hall of Famer Buck O’Neill was a first baseman for Almendares and he described the scene as euphoric.  “Whew, they turned out...everybody was excited.  They had people riding all over the streets on top of cars, hanging onto streetcars,  blowing horns, with ribbons and banners and everything.  Oh, Havana, was outstanding really.”
With the Dodgers ignored by the locals, they went about their business for season preparation while Cuban broadcaster Felo Ramirez described the final series game as tense.  “Cuba was paralized,” he said.  “The country shut down...no one worked that day.”  And following the game? “Bedlam” was the word used to describe it.
Nobody even noticed that history was to be made in the U.S. with the integration of the Major Leagues.  To the Cubans, this was no big deal.  Their professional league was packed full of black players and Negro League players were always a part of the Cuban League who were familiar with such greats and Josh Gibson, Cool Papa Bell, Satchell Paige and the aforementioned Buck O’Neil.  Jackie had arrived as a ballplayer and was coming off a AAA Montreal campaign in which he batted .349.  The Major League roster spot was his for the taking.
With Dodger teams facing stellar All Star Cuban competition, Minnie Minoso amongst them, Cuba was ideal training ground for the Brooklyn club.  The facilities were the best and considered to be of major league caliber.  There were to be no confrontations with contentious Florida baseball fans that didn’t want the league integrated.  The interruptions that could distract Robinson, Campanella, and Newcombe weren’t existent on the Island.  But Branch Rickey had other motives for the Cuba Spring Training venture.
In 1946, the Mexican League, operated by the Millionaire Customs Brokers, the Pascual Brothers, were a serious threat to Major League baseball.  They were offering some attractive dollars plus interesting incentives to Major League players to defect to the Mexican league and were successful at luring away some top talent, 18 players in fact.  Such as Sal Maglie, Mickey Owen and the aforementioned Max Lanier.   It was reported that Ted Williams was offered $300,000 to jump leagues, worth $3.6 million in today’s money.   MLB Commissioner Happy Chandler issued an edict to all players that defected, which was a five year ban from returning to the U.S. to play in the Majors.  The Dodgers training in Havana had an ulterior motive too, and that was to shut down the upstart Mexican League.  Rickey made an effort to let Latin players know, especially the Cuban players,  that if they played in Mexico, they wouldn’t be allowed to play in the U.S. Major Leagues.
Additionally MLB pressured the Cuban league to issue a similar ban and not allow Cuban players that participated in the Mexican league to also play later in their home soil in the Cuban League.  This was a secondary tactic to shut out the Pascual Brothers and their intent of creating a rival baseball league.  For the most part, it was successful and the Mexican League never materialized into a major force.  A sad reality of all this was that this decision destroyed the Cuban Leagues.
Cuban players that played in Mexico too were banished.  As a result, a rival  baseball league  was created in Cuba for those players that dared play in Mexico.  Cuba now had two diluted leagues instead of one powerful one. When Fidel Castro took political control in 1959, the Cuban baseball leagues were dissolved and replaced by Cuban Amateur baseball that continues to this day.

It should be noted that though the perception exists that Rickey moving the Dodgers would allow the Dodgers black players to avoid Jim Crow laws of the south.  The reality of the situation was that Cuba too had segregated accommodations for their players.  The Dodger stars stayed at the plush Nacional Hotel while Robinson, Campanella, and Newcombe were lodged in dumpy third rate hotel.
There is much more to the Dodgers ’47 Spring Training story that could have volumes dedicated to it, but in the end it served the two purposes successfully, preparing Robinson for his MLB debut and shutting out the Mexican League defections.  By 1949 the Dodgers had found a permanent home in Vero Beach for the next 58 years.  Would the Dodgers ever return to Cuba?  Why yes, they would in 1959 for some exhibition games, a few months after Castro grasped control before an interesting crowd of “barbudos” revolutionaries.  But that is another interesting story I’m sure.  Another post for another day.
Sources for this post: Roberto Gonzalez Echevarria article, 1998  and Baseball Alamanac Article