Blogger Softball Tournament Adventures-The Difficulties of Keeping a Team Together

It’s a day in which the Dodgers formally launch the 50th Anniversary Logo of Dodger Stadium will be displayed through this entire 51st year of Dodger Stadium’s existence.  A day when it is announced that James Loney won’t face charges for using his luxury vehicle as a bumper car on the Ventura Freeway.  The day after the very cool looking Drysdale/Wills bobbleheads are displayed for the first time and some lucky slug pulled out a 14 carat gold Topps Jackie Robinson card out of a pack.
Some cool Dodger stuff is going on and what am I doing?  (Play the fanfare, cue the drum roll) I’m ironing on stencils to create the first official “Opinion of Kingman’s Performance Softball jersey.”  Yes, on this day, a mere 9 days before the arrival off Softball Nirvana, I’m using all my creative juices to complete jerseys for my team for the Dodger Blogger Tournament to be held on Feb. 11th and West Covina’s Big League Dreams facility.
Yesterday, the schedule came out and my club in our first game goes up against Roberto Baly’s “Vin Scully Is My Homeboy 2,”  a mighty blogging powerhouse that is so good that they field TWO TEAMS. We then face two other teams, both representing the organizer of the event, The Left Field Pavilion Forum, teams One and Two.  For those multitudes of followers of this blog that intend of attending the event, the OKP team will play at  9:00am, 12:00 noon and 2:00 pm. 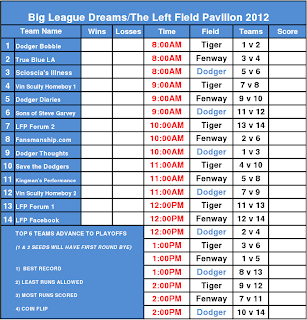 As I scrap together my team, that started out with 18 on a roster that has now dwindled down to 12, I am almost to the point of groveling and begging my players to not abandon ship.  So many variables I face with my contingent of ballplayers made up of 5 law enforcement officers, an optometrist, a writer, real estate agent, 2 college students, and possibly two homeless guys we pick up on the way to the ballpark by promising them a pitcher of soda and a pizza if they play.
Four players are coming from long distance that may be hindered from arriving on time if inclement weather drops snow in mountain passes.  Another has a Saturday morning clinic to conduct at his medical practice forcing him to miss the early game, another has committed but admits “I haven’t played in 22 years.”  And then there is my wife, who’s cute and all, but when it comes to athletic ability...well...she’s cute and all.
Yes, the OKP team is a ragtag bunch of guys (and gals) that will be a force to be reckoned with.  Meanwhile, I just keep ironing on stencils onto shirts,  Uniform numbers, logos, Letters, piece by piece.  We’ll at least be presentable.


Additional note
Two of the guys on my roster are old friends dating back to High School (and earlier).  The guys will want to kill me for showing this but In the photo below the three of us are singing in a Men's Choir at Los Altos High School, newspaper clipping from 1976.  After all these years, we're back together again, this time on the diamond.  The little kid in the front row far left  is me (I always was the smallest).  The tallest kid in the back row furthest to the right is Rob, our 6'9"  first baseman and current L.A. County Deputy Sheriff.  Participant number three (Jim), is in the second row, his back to the photographer, far right.  Jim is a CHP officer today.  I haven't seen Jim in 20 years, so it'll be a great reunion (if I survive the beating for posting this photo).  All three of us in law enforcement today, 35 years later.  Canaries in a previous life. 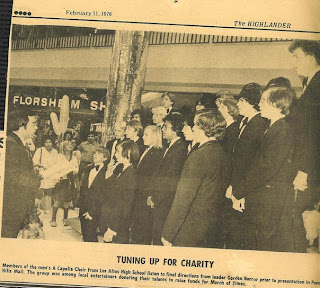