Well, At Least the Starting Pitching Is Lined Up...

The second guessers are having a field day following the Dodgers 4-2 loss to St. Louis in game four of the NLCS.  There are many that believe that Zack Greinke should have been given the ball and in retrospect, he probably should have started. What's done is done though.  Tip your cap to the Cardinals who's number four starter out pitched our number four guy.
One thing that few are mentioning though is that if Greinke had started, both Greinke and Kershaw would have been pitching on 3 days rest. With Kershaw, actually having to go after 2 1/2 days because tomorrow’s game is a 1:00 PM start time.

So now the Dodgers have their two aces going back to back with adequate rest.  That’s actually pretty good news.  Both can be expected to go close to the distance.  This won't be a game where the likes of Withrow, Marmol, Howell and Belisario will toe the rubber.  It's going to be Greinke, Wilson and Jansen.  If the Dodger prevail, it'll be Kershaw, Wilson and Jansen two days later.  And if the Dodgers fortunes send them to a game seven, there won't be anybody on the pitching staff that isn't available for the finale.

Hanley Ramirez’ broken rib has debilitated him to the point that he can’t go.  That’s the bad news and for a Dodger offense that has been struggling, it's incredibly bad news, but the championship teams overcome injuries and once again the Dodgers will have to prove they can do so.

I noticed a few tweets from Dodger fans that suggested that the Dodgers pitch Kershaw tomorrow but that would be a bad decision.  First, because Greinke is lights out at home and second, because Kershaw on 2 1/2 days rest isn't something that should be considered. 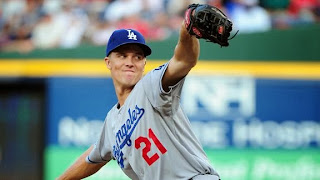 You go with what you’ve got scheduled.  Greinke - Kershaw - Ryu.  If the Dodgers somehow stretch this thing to seven games, we’ll all be thanking our lucky stars.   We thought that they could win games one and two because Greinke and Kershaw would be pitching.  I feel even more confident this time around because at least one game is at home.

The character of this team will be tested as it never has been tested before.  We saw this same scenario play out in 2008 and 2009 in the NLCS against Philadelphia.  Those Dodger teams gave up when down three games to one.  It remains to be seen if this team can make history and be the first Dodger club to come back from a three to one deficit.

They’ll have to do it with Nick Punto at shortstop, (or maybe even Michael Young).  They'll have to show that they can hit Joe Kelly and then Michael Wacha.  It remains to be seen what kind of lineup card Mattingly will hand to the home plate ump when game time arrives.  Tomorrow’s game will be one I have to miss because like so many, work will be calling.  It’ll be like the old days, sneaking a transistor radio into class.  I actually kind of look forward to that.  Watching these games has been too much for the ticker.


************************************
Quick story:
Game three, 1977 NLCS against the Phillies.  I listened to that amazing Dodger comeback victory unfold when they scored three ninth innings runs as I walked home from school.  It was a 3 mile trek to my home and I’ll never forget the exact spot I was at when Manny Mota scored on that Davey Lopes smash that was a bang-bang play at first base.  Jerry Doggett was calling the action at the time and it wasn’t until later that I saw the replay and saw how close the play was.  But there I was, with a plastic “Snoopy” radio glued to my ear, getting the images through the magic of of baseball audio described by a great announcer.  I jumped in joy on a street corner that will always be a special spot for me because of that moment.  Baseball can be so great.

Hopefully the images that Vin, Charlie and Rick describe tomorrow will be less stressful and a Dodger blowout win ensues.  We need one of those.  It’s been a while.  The heart can only take so much.

Dare I say it?  The Dancing "Rally Bear" was ejected from the Stadium yesterday.  Is it possible that a "Curse of the Dancing Rally Bear" is in affect?