Just when you think Dan Mattingly will be manager for he next few years, the Dodgers hold a press conference and the stability of the situation is shown to be anything but that.  In what some may consider to be a moment of career suicide, Don Mattingly let the world know that he isn't happy with the one-year contract that automatically vested for him for next season after the Dodgers defeated Atlanta in the NLDS.  Apparently Dodger ownership is reluctant to give him more than one year.

"This has been a frustrating, tough year, honestly," he said.  "You come in basically as a lame duck manager, and with the payroll and the guys you have, you make it tough in the clubhouse, put me in a spot where you're basically trying out, auditioning.  Can you manage or not manage?  To me we're three years in.  We're at the point where you know or you don't."

Mattingly's got a point.  After three years, you can fish or cut bait.  I like the man.  He's a wonderful interview and about as nice a guy as you'll find in the game, but we saw how he was seriously lacking as a manager with in-game strategy.  Don's rather predictable.  He doesn't manage according to sabermetric guidelines.  He loves the double switch.  He's quick to give up outs, often setting up situations where the bat is removed from his best hitter via intentional walk.  His handling of his bullpen is questionable.  We've seen what he is as a field manager and I'm ready for the team to go in another direction.  Jim Leyland is out there.  What a find he would be.

So that's where we are on this Monday after elimination Friday.  Though Colletti said that the situation would be resolved soon, ("It's going to be resolved rather quickly," he said),  it sure seemed strange that they went into this presser, knowing full well that questions about Mattingly's future would be asked and neither of them had a concrete answer on the subject.

The Dodgers will have organizational meetings the next five days.  Maybe we'll get some answers during that time with regard to the field manager and the coaches.  Several writers are speculating that Mattingly is as good as gone and that his comments will be found as offensive to the Dodgers ownership group.  With Managerial openings in Washington, Cincinnati and Detroit, all locations close to Mattingly Evansville, Indiana home, maybe he believes he can land a position somewhere closer to his roots and family.

"I don't want to be anywhere I'm not wanted," he said today.  Those words can't be well received by Stan Kasten and the Guggenheim Group.

Alexander Guerrero, the Cuban infielder who was rumored twice before to have signed with the Dodgers a few months back appears to officially now have inked a deal with Los Angeles.  It is reported to be a 4-year pact for $28 million that can actually earn him $32 million if incentives are reached.  Represented by Scott Boras, the superstar agent has ensured that Guerrero will be 31 years old when he reaches free-agency, and ideal situation for him if he excels as expected. 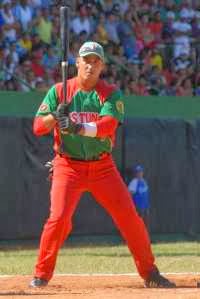 Guerrero is a power hitting infielder that had been blackballed from the Cuban national team since it was suspected that he wanted to defect.  Working out at the Campo Las Palmas facility the Dodgers have in the Dominican Republic, the Cuban refugee accepted the Dodger's offer over those from other suiters.

Scouts question his arm and whether it is strong enough for the shortstop position at the major league level, but few question if  he can handle second base.  Guerrero is slated to play winter ball this off-season, probably in the Dominican, as no hint has been made that he'd head over to Arizona for the Fall League.  Geuerrero turns 27 years old this December, so his baseball development is beyond the raw skills that we all experienced watching with Yasiel Puig this past year.

The signing of Guerrero does not completely doom Mark Ellis' future with the Dodgers.  Ellis' option is for $5.5 million this next season.  The Dodgers just may re-sign him and allow him to battle Guerrero for the position.  We all know the solid defense second baseman Ellis is.  Perhaps the Dodgers are keen on having both players in the roster next season.
Posted by Evan Bladh at 6:23:00 PM