Shoulda Been This Year

I had to work this Sunday morning and it was tough to go in.  Being the first work day since elimination day, I didn't look forward to it  Though I had made an effort to not boast and keep quiet regarding my Dodgers allegiance during post-season play, there are some that were simply waiting for the chance to talk smack about the Dodgers falling short.

You see, these are the dreary days of autumn having come fresh off a post-season disappointment knowing full well that it'll be months of Dodger-less news and no games to sit back and enjoy.   The wonderful thing about baseball is that there is almost always a tomorrow after a tough loss.  That isn't the case in October, and that's what makes post-season baseball so difficult.  The recovery takes weeks if not months.  Coincidently it's also the time of year where I know that my work ramps up to a crescendo of unpleasant tasks, making the fall and winter by far my least favorite times of the year.

So I got to work this morning and parked my car and there it was again, another vehicle with one of these license plate frames on it.  It was as if it was taunting me.  Poking fun at me.  A "neener-neerner-neener" moment. 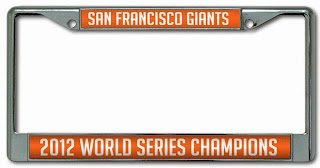 They're all over the place and they aren't going away.  I wanted to witness another Dodger World Championship in the worst way, mainly just to shut up the Giant faithful that take a particularly macabre joy in watching the Dodgers fail to advance to the fall classic.  But mainly because I wanted to put one of the World Championship frames on my vehicle.

Next came their inevitable boasting.  The emails and social media taunts from "friends" had started up shortly after the loss of Friday, essentially twisting that knife in a fresh wound.  It was done simply because they could, and that's what they do best.  Kick people when they're down.  I'll never get it and I never will.  They call it "schadenfreude."  Getting a thrill out of someone else's misery.  Schadenfreude is the basis and the backbone of the mentality of San Francisco Giants fans.  So many years where they fell short, (fifty-six years to be exact without a World Series championship they went).  There wasn't a lot to celebrate so they sought out what the considered the next best thing: watching the Dodgers fail to win championships.

They developed their schadenfreude mentality to an art form.   It advanced to the point that watching the Dodgers lose was more joyful than seeing their team succeed.  I witnessed it one night at chilly Candlestick Park in 1996.  The Giants were losing and completely out of the pennant race, but when the out of town scoreboard posted a Dodger loss, the 13,000 fans let out a cheer in jubilation.  You'd have thought they won the pennant.

So now that they've won a couple of titles you'd think that they would be above that schadenfreudism.  You'd think so, but it isn't the case.  What a bunch of losers.

Following this Dodger team with such passion is painful.  I didn't enjoy the playoffs.  That was torture from start to finish.  The Dodgers went 5-5 in this post-season, but it felt like it was 2-8.  Never in my life have I second-guessed a manager as I did this time around.  It probably had to do with the desperation to get that San Francisco monkey off my back.

It'll be another year, and I wonder how many of these I can take.  Twenty-six years now, and the Kirk Gibson footage looks grainier and grainier.  Isn't there some high definition footage of that home run somewhere?  Heck, Ronald Reagan was President and steroids hadn't even made a dent on the baseball records yet.  My daughter mentioned it when watching the footage once, "Why are the players so skinny dad?"

2014 seems so far away.  Another 162 games to go through against some western diviison opponents that really have an axe to grind.  They want to do us serious damage.  It's not easy to get within two games of a World Series.  It's only happened once to the Dodgers in the last 26 years.  They were never closer and now, they have to start from square one.

So while others talk about what a fine season it was and how the team needs to be proud, I have a hard time accepting that.  This team was very close to that ultimate goal.  Yes, the injuries were a lot to overcome, but with Kershaw on the mound with plenty of rest, I simply expected much more than what happened in game six of the NLCS.  As Dodger fans, I believe that we should all be expecting more.  This fan base deserves a championship.  The time is now.  Colletti will get to work to rebuild the roster again and the hot stove debates will begin, but I'm not over the sting of this loss.  This should have been their year.  I HATE that "wait till next year" saying.  This should have been the year that we were making preparations to attend a downtown L.A. parade.