Hanley Ramirez...Leadership Role Rises to the Next Level

There was an interesting dynamic taking place in the midst of Kenley Jansen striking out the side in the top of the 9th to close out the Atlanta Braves in game 4 of the NLDS last night.

Jansen had already struck out pinch hitter Jordan Schafer swinging.  Now he was two outs away from victory and Jason Heyward was at the plate, already behind 0-2 in the count.  What followed was an unusual break in the action.  Unusual because Jansen was dominating.  Unusual because the rhythm of the inning was interrupted and some confusion ensued.

Jansen shook off his catcher A.J. Ellis.  He stepped towards him and Ellis called time and trotted to the mound.  Hanley Ramirez quickly rushed there too along with Juan Uribe.


Before Ellis could say a word, Ramirez was in Jansen’s face.  Now I don’t have anywhere near the lip-reading skills that Vin Scully has, but I’m pretty sure this is what Hanley was saying to Jansen while he emphasized his point by sticking his his finger in the A.J. Ellis’ chest: 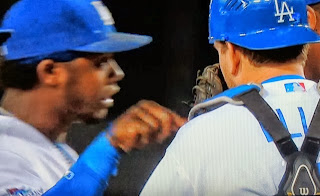 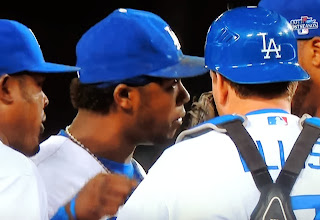 As I mentioned in the blog piece yesterday, Hanley Ramirez has established himself as the leader of this ball club.   That fact wasn’t more evident than during that little conference on the mound.  Ramirez was flapping his gums and everyone else was nodding their head in affirmation.  Look at the grin on Jansen’s face as soon as Hanley turned away and returned to his defensive position. 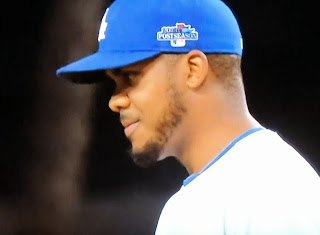 It looks like the message was delivered, loud and clear.  Jansen got back to business.  Five pitches later, he had struck out the side and the rest is to be recorded in Dodger lore. 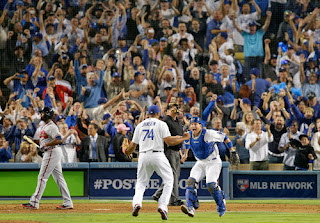 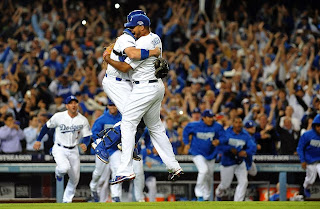