They've Got to Stand Pat 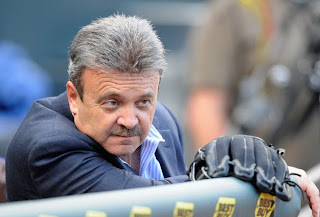 In a Year Where the Dodgers arrive at the trade deadline date in first place with a 3.5 game lead they need to make a loud noise and let the baseball world know that they are a force BY STANDING PAT.  That's right, don't make any moves at all.  Ned Colletti can speak volumes by holding firm with the roster he has in place.  Though it would be foolish to expect the winning ways to continue at an .825 clip, this Dodger team is strong enough to win the whole enchilada.

The Outfield
With a foursome of Crawford, Kemp, Puig and Ethier, the Dodgers probably have the best outfield foursome in baseball.  Three of the four are seriously lacking in their normal production, but look where they are.  On top of that, things are looking up.  It wouldn't be surprising for Crawford, Kemp and Ethier to improve their production in the final stretch.


These guys have yet to hit on all cylinders and what if they get hot when it matters, around mid to late September?  These guys could really mash in post season play.

The Infield
Adrian Gonzalez is the Dodgers most consistent hitter on the club.  A quiet leader.  He has power, he drives in runs and he is skilled in situational hitting.  With the exception of Hanley Ramirez, there is no other hitter in the Dodger lineup that you’d want at the plate than Gonzalez when runners are in scoring position.

Mark Ellis is about as steady a player as you’ll find.  A defensive guru at the second sack.  Grounders to the right side of the infield are practically automatic outs.  Mark is that player that knows the fundamentals and rarely makes a mistake.   He takes his lunch pail to work everyday and he's dedicated.   Lately he has been hitting extremely well too.  This guy is one of the unsung leaders on the team and last night's win was a key example of that.

Hanley Ramirez at shortstop is easily the best position player on the team.  His lightning quick bat is spanking the ball to all areas of the field.  His power has resurged, his batting average is where it was when he was winning a batting title four years ago.  Hanley is the player that he was pre-shoulder surgery 2010.  If he can stay healthy, the Dodgers are going to win a lot of games.

Juan Uribe, the Dodger third baseman has resurrected his career this year.  His hitting approach is different as he has bought into Mark McGwire’s philosophy.  It’s a drastic change from his entire career raising his on base percentage a full 85 points higher than last year.

Summary, no moves needed in the infield Ned.  Move on.

Catcher
AJ Ellis is consistent and steady.  Offensively he isn’t spectacular, but you know he’ll make a pitcher work to get him out.  He isn’t cheated out there and he’s not afraid to hit with two strikes.  Then he'll bang out that common clutch hit.  On top of that bat he’s throwing out would be base stealers at an astonimical rate.  Back up catcher Tim Federowicz is more than adequate as a second stringer.

The Starting staff
Without going into details it is fairly easy to say that Kershaw, Greinke, Ryu and Nolasco are a solid 1 through 4.  Capuano or Fife are respectable as a number 5 starter.  Waiting in the wings at Albuquerque is a Jonathan Sanchez who has pitched well of late.  (Though he may walk away from the organization if not moved to the Major League roster).  It is unbelievable how much injury the staff has endured this season and yet they still are formidable.  There is enough starting pitching to win the whole thing.

The Bullpen
This is a group that is pitching well with defined roles.  With the addition of Brian Wilson, I see no room for a trade addition.  Jansen, Belisario, Paco Rodriguez, Chris Withrow, J.P. Howell and even Brandon League lately.  They’re all pitching lights out baseball.  Then  there’s Tolleson due back before the end of the year and Mr. 102 MPH Jose Dominguez on the D.L.  There's not much room for anyone else.  Which leaves pitchers like Guerra and Moylan at Albuquerque.

The Bench
Utility guys Skip Schumaker, Nick Punto and Jerry Hairston Jr. aren't world beaters, but they are certainly serviceable.  All are capable of making spot starts and as of late, Schumaker has been hitting over .400 the last month.  Scott Van Slyke provides some power and a mighty throwing arm off the bench too, (when he'w with the big club).  In September Dee Gordon will be available to help as a Herb Washington type designated runner.

All the trade deadline talk that involves rumors of players coming over to the Dodgers don’t make sense.  Chase Utley?  To replace a team leader like Ellis and disrupt team chemistry?  No way.  Cliff Lee?  He’s got experience and all but he’s injured at present and he’s not having a real great year out there, plus, there's a lot of money owed to him.  That’s not an ideal situation to take on that type of investment for a pitcher that could be near the end of his career.  Joe Nathan for Ethier rumors?  That make no sense.  The Dodgers have more closer options than just Jansen and dispatching Ethier isn’t a good idea because the Dodgers have rarely had three healthy outfielders all season.

Often rumors are simply the wonks coming up with a topic of conversation for a piece.  Sometimes they are planted by competitors to run up prices.  Colletti has made his moves already, acquiring Marmol and foreign signee slot money, getting Nolasco and the signing of Wilson yesterday.  There's no more need for acquisitions.  Anything done beyond this point would not be prudent.  Let's all hope that Colletti is reading things the same way.