"MLB.com's Peter Gammons was told that the Dodgers are prepared to offer Miguel Alfredo Gonzalez a contract in the 5-year, $50 million range, which is expected to be enough to sign him.  'Word is Dodgers will go five years, close to $50 million,' a general manager told Gammons.  'If so, he'll be a Dodger.'  Gonzalez, a 26-year -old right-hander, left Cuba earlier this year and was declared a free agent by MLB on Monday.  He's expected to be nearly major league-ready but seems unlikely to make an impact this season.  The Braves, Cubs, Yankees, Red Sox, Rangers, Phillies, Blue Jays, Twins and Marlins have also been connected to him."
July 21 - 8:50 AM 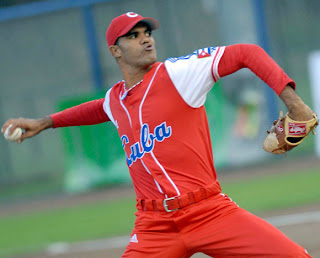 The word is out and it appears the Dodgers are front runners in the Miguel Alfredo Gonzalez sweepstakes.  This makes perfect sense as the Los Angeles front office seems to be taking the tactic that 1) International signings are the way to go and 2) when a deal only costs money, something the organization has, then that is the prudent path to take.

With regard to the first point, veteran Cuban asylees are not subject to MLBs slotting restrictions and penalties for paying above their slot amounts.  Essentially that means that international Cuban asylee signings are the way to go and can prove to be lucrative moves.

Gonzalez has a proven track record in international competition and in the Cuban Serie Nacional, their nation's premier baseball league.  As it was with Yasiel Puig, Gonzalez was banished from playing the last few years due to his attempted defections from the island.  In the end, that may be beneficial to the team that signs him as he has less wear and tear on his arm.  His last stats posted from three years ago show a 2.13 ERA with 6.99/K's per 9.  His fastball sits at 93 MPH with an occasional 95.  He is known to throw an assortment of pitches aside from his fastball that include a forkball (that has cutter type movement), a changeup and curve.

Gonzalez is mentioned in some quarters as already being major league ready and Colletti is quoted as late as yesterday as stating that the Dodgers will not attempt to acquire another starter from a major league team.  This probably means that he thinks he may believe he has a deal with Gonzalez, who is represented by the same agent as Puig.

With the Dodgers now in place with 6 starters, (as Fife and Capuano cover the 5th spot), Gonzalez may not pitch in the majors this year.  But injuries have seemed to be a norm this season for the Dodgers.  It would be surprising to not see Gonzalez make his MLB debut in 2013 if signed by the Dodgers,  He may prove to be quite valuable during the pennant stretch while facing division foes unfamiliar with his stuff during the crucial games in September.