For Puig, It Was Quite a Weekend...and a Learning One at That

I had the opportunity to attend the one losing game this weekend, which was the Saturday affair at AT&T Park.  Congregating along the Field Level third base line with other Dodger fans, the topic on everyone’s lips was the same: Yasiel Puig.  The kid has captured the attention of everyone and is the most exciting Dodger player to emerge on the scene for a long time.

One of the old time Dodger fans I struck up a conversation with was Chuck.  A die hard True Blue follower that has lived in enemy territory for decades.  He has followed the Dodgers since the days of Wills, Drysdale, Koufax and Tommy Davis.  He spoke his mind and said things that a lot of us are thinking but few are saying.

“I love watching this kid play.  He’s got all the tools.  He makes mistakes of aggression, but I can live with that as long as he’s learning,” he said.  I agreed and added. “We’ve never had a player like this in all the years I followed the team, Reggie Smith for two or three years was amongst the best toolsy players in the game, but he was older, he didn’t have this speed, nor did he hit for this average.”

“Yeah, but there’s one thing that really concerns me,” said Chuck as if he already knew what I was thinking.  “He’s got a lot of Barry Bonds in him, and I don’t mean that in a positive way.  I want to root for him bad, because I think he’ll be the greatest Dodger position player ever, but not if he’s a (expletive).”  Then he started mentioning a number of antics that he has seen of Puig that makes him uncomfortable.  They mainly had to do with respecting opponents and the game in general.  He went on, “The (expletive’s) are usually wearing that orange and black uniform over there.  You know, guys like Marichal, Montefusco, Bonds, Wilson, and Pagan.  Those cocky guys that show up the opposition and are so easy to hate because of their swagger and demeanor.   We need this kid to be groomed to not show off so much, not show up opponents and keep things low key.  I know they have guys mentoring him, but it may not be enough  His personality might be too much to contain.”

Chuck’s words rang true to a great extent, but I didn’t want to admit they were. There’s no doubt Puig has his issues.  There are the little things that I notice that haven’t mentioned before.  Like the time against Philadelphia that he pointed to the back of his jersey after a great play.  Who does that anyway?   Or the mocking of opponents from the dugout, specifically when an opposing first baseman went to field a play and his feet went out from other him on the wet grass and he slipped.  A pan of the Dodger dugout showed Puig laughing at him.

I know a lot of this is maturity and he’s at the disadvantage of having to learn in a different culture, with a different language and with little minor league seasoning, at the major league level under the world’s spotlight.  Maybe we’re being unreasonable with the expectations that Yasiel Puig change his personality and abide by the so many unwritten codes that are within the game.  I mentioned that to Chuck, saying that he’s a kid thrust into the national stage after having next to nothing a year ago.  It’s sensory overload for him.  It might be too much for him to grasp in such a short period of time.

“Yeah, I was 22 years old once, and I did some real stupid things too,” he said, as his graying hair fluttered around in the San Francisco wind under his worn Dodger cap.  “I’m hoping that he learns quickly and changes his ways, ‘cuz if he wasn’t a Dodger, I know I’d be rooting against the guy.”

In the past few days he has had the need for stern counseling due to blunders in his play.   First, from Davey Lopes, for getting thrown out at third on an ill-advised steal attempt during a tie game with the hottest hitter on the planet at the plate.   It was the latest of his rookie mistakes that we have grown accustomed to, and can live with for the moment since we know they are the growing pains of a budding star learning the game at the highest level.  But then there are the mistakes made off the field, and those are the most concerning to me.

He refused to speak to the press for a few days, right at a crucial time when the national media was taking notice of him for having won Player of the Month award, and in the midst of a rivalry series with the Giants.  Juan Uribe knew that wasn’t proper and it is reported that he had a heated conversation with the rookie in which they exchanged words.  Eventually Puig relented and listened to his veteran locker-mate.  But it was with some reluctance before he faced the writers after the game and answered questions. 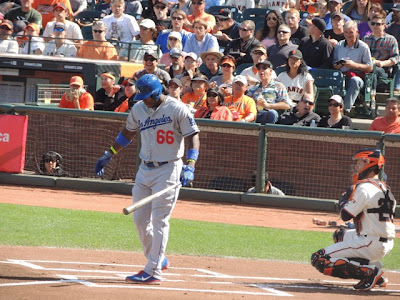 I’ll give him this though.  When Puig is interviewed, he says the right things.  This was in the aftermath of the Sergio Romo incident and he kept things professional.  “Yesterday, he struck me out, he controlled Hanley and he celebrated.  Today, it’s our turn to celebrate.  We were screaming at him, but it wasn’t anything bad,” he said.  “I knew he was going to throw me a slider because it’s the best pitch he has.  He controlled me and my teammates with it yesterday.  He’s a tremendous pitcher.”

That’s a positive and I have to believe that he’s a smart enough kid to listen to his peers and his coaches, as he easily could have talked a lot of smack about Romo and gloated after beating him on Sunday.  We know that Ned Colletti talked to him on the topic of being available to speak with the press.  It looks like he listened and acted accordingly.

Now it should be noted that during Puig’s weekend in San Francisco a perfect storm of events hit him that may have affected his thinking.  First he arrived not at 100% physically having banged up his body in Colorado making that amazing catch.  That coincided with him being named Player of the month for June.  The fans were at their annoying and taunting best in Giantland.  It was all star selection Saturday, in which Giant Manager Bruce Bochy left him off the roster and then to top things off he had his worst game of his short career in a nationally televised game,  pulling out the golden sombrero, with 4 strike outs.  Combine that with the Romo celebratory dance, which can easily be interpreted as a mocking of opponents.  The kid was probably ready to combust by post-game Sunday.

On this blog there has been very little talk of the importance of the Diamondback series that started yesterday.  Easily the most important series of the season thus far.  Entering into it at 4 1/2 games back.  A disastrous three games could have made the Dodger’s winning ways the past few weeks all for nought.

The offense returned last night and knocked out 17 singles with Zack Greinke serving up a bunch of zeroes in a 6-1 Dodger win.   Positivity continues to reign and now we are thinking of reaching the All Star break within an eye lash of first place if not in the lead by then.

Ricky Nolasco makes his debut tonight against Ian Kennedy who faces the Dodgers for the first time since the bean-ball fest in mid-June.  With the Dodgers a mere two games under .500, and 3 1/2 out of first place, anything less than a series win to close out the road trip would be a disappointment.

The injury problems continue to loom as Matt Kemp returned to Los Angeles for an intensive exam of his shoulder by Dr. El Attrache.   I fear the worst and have a hard time believing that the injury isn’t related to his off-season surgery.  Stephen Fife’s recurring shoulder bursitis comes on the heals of my piece in which I mentioned that he probably can’t be counted on for a full season, as he’s never thrown more than 160 innings in a season.

So the trade speculation continues, as the Dodgers are in the rumor talks about acquiring Matt Garza from the Cubs.  The Dodger pitching staff of nine starters in Spring Training continues to be a tad short.  It’s amazing the injury infliction this ball club has taken on, yet here they are, still in this thing.

Oh, and one more thing.  Hanley Ramirez continues to blister the ball and now has a 19 game hitting streak while batting just under .500 during that spell.  He’s about as dialed in as he’s ever been.