Earlier in the year I expressed my frustration with the Dodgers and related the following story.

It was May 11th and a practical joker at work anonymously sent me a double sealed envelope marked as confidential.  This isn't real unusual at my place of work, as confidential correspondence is often sent in sealed envelopes in law enforcement circles.  It could have been some safe combination changes or perhaps a file on a case that pertained to me.  Instead, what I got was the National League standings at the moment. 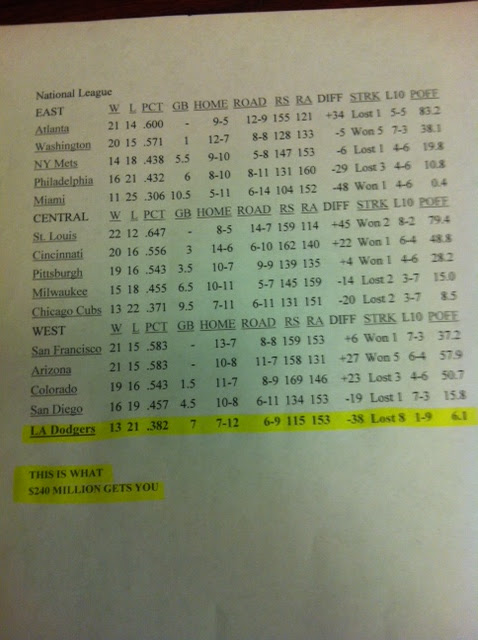 The message at the bottom then mocked me with the inscription in Caps: "THIS IS WHAT $240 MILLION GETS YOU."

In that post I wrote: "I long for the day that the earth returns to it’s proper axis and the Dodgers are back where they belong in first place.  This is brutal!  And I can't even address it 'cuz it was sent anonymously."

Well folks, that day has arrived.  I woke up this morning and looked out at the churning San Francisco fog and it's a beautiful thing.   There is misery here.  AT&T Park will reluctantly place the Dodger flag above all other western division foes.   In my mind, the birds are signing, and it's a warm summer day in Los Angeles.

That Giant fan who sent me the anonymous note will not have the guts to show their face.  I assume the note was sent anonymously because he feared that this day would come and a serious calling out would be in order.

But I wouldn't have done that would I?  I would have been respectful and and approached him with dignity and in a consoling nature.  And then I would have subtly told him, "In you FACE my man!  Go suck on your World Series trophy!"

Just a few bullet points before I head off to the world of the work force.  It's a good day in Dodgerland when:

*Ryu has a non-quality start and still walks away with the win.

*Matt Kemp sits out with an injury and the absence his hot bat isn't even noticed.

*Yasiel Puig crashes into a wall making another spectacular catch and he walks away unscathed.

*The entire NL West (with the exception of San Diego), takes home a loss on the day.

*Andre Ethier emerges as the second hottest hitter on the team.

*The ball club completes the rare feat of a dominating win in an AL Park.

*(and last but not least) The Dodgers stand alone in first place, the first time this season.