With the fracas and brawling in tonight's affair, the game certainly had it's entertaining moments, but I sometimes wonder why I still watch.  I'm certainly glad I did, because it was one of the most entertaining games of the year.  A rare comeback win for the Dodgers, who scored three in the bottom of the 8th to surge past an angry D-Backs team, in a beanball war that will most likely be remembered for a long time.  The victory still didn't remove the bad taste from the previous evening's loss, which was a microcosm of the Dodgers 2013 season.


From day one of this season, it has been a disaster.  It’s kind of like those traffic jams on the freeways.  There’s an accident ahead and it has been cleared off the road for a time, but the jam continues because as you arrive to the accident scene, everyone slows down to take a look.  Once past the scene of the incident, traffic starts to move.
That’s the way it is watching the Dodgers.  You watch.  There’s a wreck ahead.  You check out the injuries, and there are multiple ones.  And you survey the damage, then you move on with your life.  Get up the next day and do it all over again.

When Puig ran out a ground ball and came up limping in the second inning tonight, I asked myself, “why do I put myself through this?”  Day after day it’s bad news ad nauseum.  At work there are the incessant wise cracks and there’s nothing that can be said to refute them.  The team is awful, period.

Tonight even, as I was forced to listen to D-Backs broadcasters.  Again, Bob Brenly poked fun at the “late arriving-early departing” Dodger crowds, (as if the D-Back fans are stalwarts at arriving on time and then staying to the end).  Yes, those same Diamondbacks fans that couldn’t even sell out a playoff game.  He then mentioned that the crowd was large due to the give away beach chairs “that Dodger fans will be able to sit in while the watch the playoffs in them this year.”

So funny that Mr. Brenly.  Almost as funny as that time he played third base and made about eight errors in one game.  Now THAT was funny.  He added more comedic flare to his comments when he said the Dodgers were getting a lot of cheap shots in during the brawl and how he couldn't understand why Mattingly wasn't ejected after Kennedy beaned Greinke after he obviously threw at his head.  Anyway, where was I?  Oh, yeah.  The trainwreck of the Dodgers season. 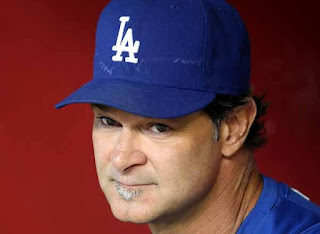 Again, there are those calling for Don Mattingly’s head.  I certainly can’t blame fans for wanting to change the manager.  Mattingly’s insane loyalty to Brandon League up to this point has cost them games.  When he started .130 hitting Luis Cruz in the 5th spot of the batting order the other day, I almost lost it.  There are those decisions made by the Dodger manager that are just difficult to fathom, but as a fan, I understand that if Mattingly does get the axe, there is a pretty good chance that his replacement will be just as awful.

Think about it.  Over the years has there ever been a Dodger manager that didn’t drive you nuts with his decision making. ?  I can’t think of any.  Old timers that remember Walt Alston can't tell me that he was a fantastic strategist and pulled the right strings all the time.  I remember him as a stubborn guy, especially in the later years.  He had a tendency to leave slumping players out there to die.  He also single handidly handed the ’62 Giants the pennant by completely bungling the ninth inning of the playoff game, (game 165 of the season), depriving Dodger fans the NL Pennant with what was arguably their strongest L.A. team ever. 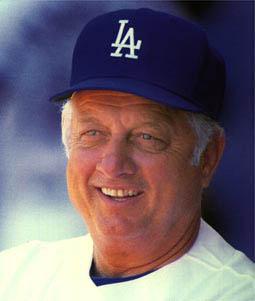 You loved Tommy Lasorda did you?  Remember how Tommy would leave starters out there when they were fatigued and had next to nothing left in the tank.  He burned out Fernando Valenzuela by age 28.  Orel won it all in ’88, but by ’90 he was going under the knife due to too many innings.  And then there was the Tommy that failed to recognize the talent he had in front of him.  Players like John Franco, John Wetteland, Mike Devereuax, Rick Sutcliffe, and Pedro Martinez were dealt away.   Some completely out of favor with Lasorda, others never given a shot.

Tommy liked to bunt too.  The squeeze play was a favorite of his.  He also did unthinkable things like pitch to Jack Clark in playoff games.  As a strategic manager, I’d never consider Lasorda to be in the top tier.  He motivated his guys like none other, but he seldom made that chess move that was a game changer.

We’ve dealt with Bill Russell, Glenn Hoffman, Davey Johnson, Jim Tracy, Grady Liddle, Joe Torre and Don Mattingly since.  Was there anyone in that group that you were happy about?  There seems to be a fraternity of men in the game that are considered managerial candidates.  Very few are potential managers that I’d get excited about.  I see no modern day Earl Weavers in the mix.  Weaver played for the big hit, and he understood that bunting was not an important part of the game, but the walk was.  He wanted guys on base for his mashers who would drive them in.

There are so many  National League style managers out there.  You know, the guys that play for one run.  Advance runners through outs.  Sacrifice bunts, hitting to the right side.  Playing for sacrifice flys and such.  “Small ball” was the term used for Gene Mauch.  A much respected field manager that never got his team to the World Series.  Mauch’s “little ball” or “small ball” approach kept the Angels out of the World Series.  These types of managers aren't rare.  Mike Scioscia, Bruce Bochy, Bud Black, all manage in that fashion.   Some have had success but little of it was from their strategic skills.   Mattingly might lead the pack in "little ball" managing.

The other night was a perfect example of why a manager like Mattingly will drive you nuts with his small ball approach.  The Dodgers were down a run to the Braves in the bottom of the ninth against Craig Kimbrel, probably the best closer in the game.  Schumacher singled to lead off the inning and Tim Federowicz came to the plate.

Now with Kimbrel’s 100 MPH rising fastball.  You would think that Mattingly would consider letting his catcher swing away and attempt to meet power with power and hope the he could give that thing a ride.  Fedex isn’t much of a bunter and even the best of bunters will have difficulty laying one down on a fastball high and in.  But Donnie Ballgame put out the bunt sign and lickety-split, Federowicz was down 0-2.  He didn’t have a chance in that at bat.  Kimbrel retired him via strikeout and Mattingly essentially handed an out to the best closer in the game.

There are those that obsess with the Brandon League loyalty of the Dodger manager and they do so with justification, but it is the in-game strategical situations (such as the Fedex at bat the other night) that drive me crazy with Mattingly.  He did it again tonight in the 8th inning with Castellanos up.  Bunted again, this time Castellanos called out running into his own bunt out of the batters box.  Another free out, courtesy of the Dodger manager.

I read in some blogs and message boards of a call for Kevin Kennedy as manager.  I like Kevin and I think he’d do all he could to make the Dodgers a better club, but I question if his decisions would be much different than those made by Mattingly.  Would he have the fortitude to take charge and bench a slumping player owed millions of dollars on his contract, such as Andre Ethier?  I could be wrong, but I doubt it.  Would he have the power to influence front office decisions to call up such players as a Yasiel Puig or a Joc Pederson?  Maybe, maybe not.  Kennedy had a tendency to play vets in Texas that were not performing, but had a reputation.  I'm thinking specifically of Jose Canseco.

For those that think a managerial move would make a difference, I simply state that I don't think there isn't anyone waiting in the wings to be hired that would be much different than the man making the moves right now.  Changes sometimes work on the short term, but in the long run, a managerial switch would have to be with someone that will take a dramatically different approach in decision making.  Who that would be, I haven't a clue.  Seriously, I've given this some thought and there really is nobody out there that is innovative enough for my taste to fill the Dodger manager position.  Maybe some of you out there have some ideas.  I'd love to hear them.