A Tweet From the Master...He Called it, and Now We're Seeing It

It was on Wednesday, June 19th and the Dodgers were playing a double dip with the Yankees in the Bronx.  Legendary announcer Vin Scully didn't make the trip and was follwoing the game via Twitter of all things.  The Dodgers were floundering deep in last place with a 29-40 record, a full 8 games behind the Diamondbacks,  (it would get worse a few days later when they hit their low watermark on the year at 30-42, 9.5 games back). 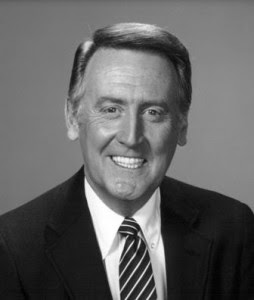 But Vin Scully has a way about him.  Even if he's writing a message via twitter.  When Vin says something profound, I listen.  When Vin makes a comment that is indicative of something positive, I feel better.  Maybe it has something to do with growing up with the man and listening to his cadence for 140+ times a season, year after year after year.

"Kemp back, and Crawford back, to go along with Gonzalez, Ramirez and Puig. I have to believe they'll make a run."

That's all it took.  It made perfect sense.  Someone else could have said it, and I would have brushed it off, but not Vinny.  The master behind the mic for 64 seasons has seen it all and if he hasn't lost hope, why should I?

Now here we are, 12 days later, with the Dodgers 4 games back in the standings at 38-43 and Vin is looking like a prophet.  No surprise of course.  The man knows his baseball and he's seen enough of it to know that the season was not lost.