I have never been one to get excited about trade rumors, especially those invented by a lowly blogger that has no connection to anything, such as me.  But the Alex Rodriguez situation in New York has gotten out of control and I believe he would be a good fit in Los Angeles. Please note that i have seen no reports that the Dodgers are even interested in him, but as the trade deadline approaches and drama in New York surfaces, maybe we'll hear something on this. 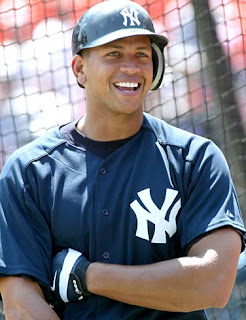 Rodriguez is completely on the “outs” in New York and possibly on his way out of baseball.  He has been linked to the Miami Biogenesis PEDS fiasco, and coming off a lacklaster performance in the post season last year in which he was benched by Joe Gurardi,  ARod has been unable to return from injury this season.  It appears that the Yankees are content with having him retire from the game with 647 lifetime homers due to injury, and collect from insurance for his monstrous $100 million owed over the next four and a half years.

Rodriguez is 37 years old and not in good graces with Yankee G.M. Brian Cashman, who tweeted that he needed to “shut the $#% up,” when Rodriguez sent a message via twitter that he was close to returning to baseball shape and to the field of play.

I’ve never seen a G.M. react in such a way in a public setting.  We know they do so in private, but Cashman simply blew it by not playing his emotional cards close to the vest.  ARod is persona non-grata in the Bronx and I would think that if he wants to resume his baseball career, it’ll have to be in another city and with an organization that is willing to take on his baggage and probably a chunk of his salary.

Now, third base has been the one spot that Dodger fans have been claiming they need an upgrade.  As pleased as we have been with Juan Uribe’s year so far, even in Juan’s best year, he doesn’t approach ARod in his worst year.  Do they dare take a flyer on the controversial Rodriguez?  There are only a few circumstances in which they may want to consider it.

First) Arod might be staring a 100 game MLB suspension smack in the face for PED use.  That needs to be resolved from the get go, otherwise, there’s no point in acquiring him.

Second) The Yankees will have to pay a substantial portion of his remaining salary, perhaps as much as 75% of it.  Interestingly, the expensive years of Arod’s contract have just about lapsed.  Though he is owed $28 million by the Yanks this season, ($14 million left to be paid), in the subsequent years, his salary decreases, age 38 (2014) $25 million, age 39 (2015), $21 million, age 40 (2016) $20 million, age 41 (2017) $20 million.  Now if the Yankees are on the hook for 75% of that, ARod could be had for $7 million next season, and around $5 million the remaining 3 years.  Rodriguez may have to completely restructure his contract if he wants to continue playing baseball for another team.

It should be noted that the Yankees may want to deal with a club that is willing to send them a big name and huge contract in exchange.  Someone like a Chase Utley from Philly, who could fill in at first base for the injured Mark Texeira.  But if the stars don't align right, maybe a deal with the Dodgers is possible.

Let me add this.  The Yankees will probably never agree to eat so much of this contract knowing that the deep pocket Dodgers might be in play, but maybe they won't hace a choice.  No matter how much they try to sugarcoat things, Cashman has let the world know that Rodriguez is unwelcome in Yankee Stadium.  You know after the playoff fiasco last year (and the notes sent to the female fans in  the 9th inning of the elimination game), Rodriguez is going to be very unpopular with the Yankee faithful.  Yet, ARod still wants to play.   It’s got to be in another uniform though.

Third) An intense physical examination from a team of sports doctors must give Rodriguez a clean bill of health.  If the hip is done, then his career should be over and Lloyds of London can battle it out with the Yankees over who pays his salary.
Fourth)  Deep back in my memory I seem to recall that Rodriguez grew up a Dodger fan.  I know when he was drafted, he was hoping the Dodgers would be able to select him.  Maybe that puts him in play with Los Angeles.  The Dodger roster stacked with superstars might be a good fit for him too, since he won’t have the pressure to carry the team by himself as the biggest name star on the club.

Rodriguez brings a lot of baggage with him.  He’s unpopular.  He’s perceived by may as spoiled and as a somewhat selfish ballplayer.  He’s never been much of a teammate and despite the one championship with the Yankees, he still has the reputation of failing to win the big games.

We can look at all those negatives in one way though, and that is he’s  got a lot to prove. He probably wants to end his hall of fame career on a positive note.

There are those that are saying I’m nuts for considering this, but look at ARods numbers even in these down years.  He hits in the .270s, his OBP is in the .360’s, he’s OPSing in the .800s.  The man is still a threat even as 50% the player that he used to be.  Now how much his performance over the last few years is steroid induced we can’t say,  but with a restructured deal for a player that wants to prove himself, maybe this could actually end up well.

Corey Seager is 19 years old and 3 or 4 years away.  Rodriguez might be a perfect fit for three years while the kid develops in the minors.  The question would be whether ARod is willing to restructure his deal to three years vs. the four that he has remaining.  Otherwise, at the end of the contract, the Dodgers would have to eat some salary.  Or he'll be an expensive tutor and bench player at the end.

In tonight's action I noticed Carl Crawford cheerleading in the Dodger dugout after Hanley Ramirez's monstrous 439 foot home run to dead center field.  With all the Puig excitement and the return of Kemp to the outfield mix, many of us have forgotten Crawford and the fine season he was having up until his severe hamstring injury.  He is a valuable contributor and with the recent Dodger enhanced lineup, he can really help the ball club. 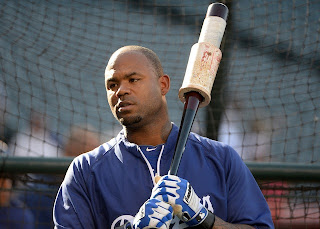 The inevitable will occur and Crawford will return this year, probably around July 5th after he completes a minor league rehabilitation stint.  At that time the Dodger outfield will have 4 starting outfielders for 3 spots.  It's a problem, but I believe, not too much of one.

If Mattingly handles this situation right and the four guys are mature enough to handle it, there should be enough shuffling and days off granted to each of them to allow the older guys and those returning from injury to be given some valuable rest during the pennant race stretch run.  Of course, Puig should never get a day off in my opinion, but we'll see.

Aside from Hanley Ramirez's hot bat, it has been a pleasant surprise to see him playing some decent shortstop.  Hanley's defense at short was a major concern for many of us going into this season.  As he makes the plays and covers ground out there without any hiccups, I must say that I didn't expect this.  I was convinced that Ramirez needed to be a third baseman for the remainder of his career.

The Phillies have out hit the Dodgers in the first three games 46 to 18.  That 16-1 loss only meant one "L" in the standings.  Tonight's 4-3 victory was sweet when you consider the schalacking they took on Friday.  A win tomorrow and the series goes 3 out of 4 for the Dodgers and they will have been outscored by a substantial margin in the four games.  That doesn't do much for their Pythagorean W-L record, but who cares?

Dodger "d" in the top of the ninth was about as ugly as I've ever seen it.   Good teams overcome those mistakes.  Maybe this team is good enough to do that now.