During last night’s broadcast, while talking about Yasiel Puig, Vin Scully touched on the topic of great Cuban players in history.  He mentioned that Al Campanis believed that the greatest player he ever witnessed was another Cuban by the name of Martin Dihigo.  I had only heard his name in passing and was surprised that Campanis, a baseball executive that had seen baseball from the 1930’s to the 90’s had such a high regard for this player.  After doing a little research about Dihigo, I can see why he felt that way.  He had an extraordinary baseball career. 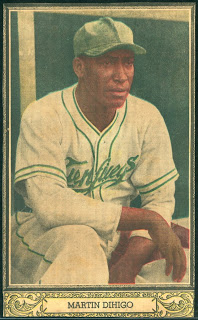 Campanis must have seen him at the tail end of his career and after many of his skills had deteriorated, because by 1945, when Al was knee deep in the Dodgers farm system, Martin Dihigo was wrapping up his 23 year baseball career.  It was his final year in the Negro Leagues and Dihigo was 40 years old.

Today he is known as the only player voted into the Mexican, Cuban and American Baseball Halls of Fame.  Dihigo played between 1923 and 1945.  He was an amazing pitcher and hitter.  His versatility is what sets him apart from the rest.  While we recognize that Babe Ruth was a Hall of Famer on the mound and primarily with the bat,  there's no doubt that his offensive prowess set him apart as the greatest player to ever play the game.  He gave up the mound by 1920 (save one token pitching appearance as a Yankee).  Dihigo pitched throughout his career, though more prominently in his latter years.  Additionally, he played every other position on the field (including catcher), on a regular basis.

Baseball segregation kept Dihigo from showing his wares in the Major Leagues where he would have shined, and that’s a shame, as several Hall of Famers raved about his talents.  One of those included Johnny Mize who said ““Dihigo was the only guy I ever saw who could play all nine positions, manage, pitch, run and pinch hit.”  While playing in the Dominican League, Mize said that Dihigo was often intentiionally walked, as opponents preferred to face Mize over Dihigo.

Buck O’Neal, who competed with Dihigo over a 15 year period said “He was the greatest all-around player I know.  I'd say he was the best ballplayer of all time, black or white.  He could do it all.  He is my ideal ballplayer, makes no difference what race either.  If he's no the greatest I don't know who is.  You take your Ruths, Cobbs, and DiMaggios.  Give me Dihigo and I bet I'd beat you almost every time."

Roy Campanella echoed those comments: ”Dihigo was one of the greatest I ever saw.  He was a tremendous hitter, had great power, could hit for average, everything.”

He was a large man for the era, 6’3” and a slender 190 lbs.  Starting is professional career in the Negro League career as a slick fielding second baseman and shortstop.  It is reported in his early years that you could hit nothing past him.  His speed and range around the second base bag were raved about by writers on the Negro League circuit.  He was 17 years old at the time.    At first he had trouble hitting the curveball but his dedication to hard work and tireless practicing allowed him to overcome the weakness.  Within two years he was leading the league in hitting at .386 and in home runs too.

As the years passed Dihigo moved primarily to corner infield positions and also the outfield.  His rocket arm sent him to the mound three or four years after arriving in the states, and eventually he began pitching every fourth day.

Dihigo was a five tool guy before scouts even identified the tools.  Graceful on the field.  A strong arm, with gazelle like speed and possessing tremendous power, Dihigo was a tireless worker on the field who would even catch on occasion.  He led the Negro League in homers for several seasons.  Playing the summers in the U.S. with a batting average as high as .421 (1926) and  .370(1927), he’d return home in the winters and dominate the Cuban baseball scene with .413 and .415 averages in the same years.  It was in 1935-36 that he made a permanent transition to pitching where he had 4 consecutive Cuban League seasons with records of 11-2, 14-10, 11-5, and 14-2 for Santa Clara (1935-39).

In 1938, while playing in the Mexican League, he finished with an 18-2 record and 0.90 ERA while winning the batting title with a .387 average.  The year before he tossed a perfect game while pitching for Vera Cruz in Mexico, and he again led the league in hitting with a .351 average.  He excelled in Cuba, Mexico, Venezuela, Puerto Rico, the Dominican Republic and the U.S. Negro Leagues (playing primarily for the Homestead Grays and New York Cubans).

Possessing a great baseball mind, Martin Dihigo toiled as a player manager on many occasions as his baseball IQ ranked amongst the best in the game.  A national hero in his native land, he was loved at home and long into his retirement was sought after in baseball management at home.  He was appointed by Fidel Castro as Cuba’s Minister of Sports shortly after the Cuban revolution in 1959.  He died at age 65 while serving in that position in 1971.  It would have been quite the story had this amazing talent been allowed to play in the Major Leagues.  Would he have been the amazing versatile player that he was in the other leagues?  I guess we'll never know, but the fact that he excelled on the mound and as a hitter explains why some prominent baseball minds identify him as the greatest player to ever step between the lines.

**************
Interesting footnote:  It is reported that Dihigo became somewhat bitter after the color barrier broke and blacks entered the major leagues.  He was a baseball announcer in Cuba and reports are he was extremely bitter and critical of play of the younger generation.  Engaged in  opposition politics to Cuba’s dictator, Fulgencio Batista, he disappeared from the scene and departed his native land, only to return after Fidel Castro gained power.  Castro named him his Minister of Sports shortly after obtaining power.

Dihigo’s son, Martin Jr. was a farmhand in the Cincinnati Reds organization from 1960-62.  He played with Pete Rose and Tony Perez in Topeka, Kansas, but returned to Cuba after the U.S. and Cuba’s political tensions rose, never to return to the U.S. and play organized baseball in the states again.